The best beer Czig Meister has brewed, the best Oatmeal Stout I’ve ever had, and a damned fine beer to represent their 6th Anniversary in business. 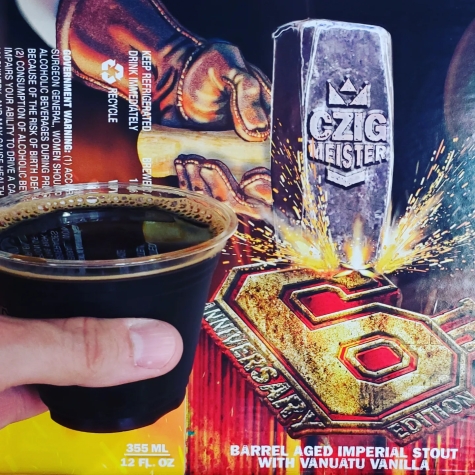 From the untappd page for the beer:

Czig Meister is one of the breweries who makes fairly frequent appearances here at the Tap Takeover. With their 6th Anniversary a couple of weeks ago (June 11), I made the trip to the brewery since I’ve attended most of their Anniversary bashes or at least had their anniversary beer (like their 4th Anniversary when COVID cancelled the party). As it so happened, beer also put me beyond the “50 beers from the brewery” territory, which has been happening fairly frequently with my favorite breweries as of late. I’ve enjoyed just about all the beers I’ve had from the great Hackettstown brewery, but even the nearly 50 beers before this one didn’t prepare me for the beer I had that day.

The beer I’m handed is fairly thick and black as night, just what I want from a barrel-aged, blended Imperial stout. The aroma wafting into my nose is a mix of bourbon and roasted malts. Maybe there’s vanilla hiding in the aroma, too. Or maybe I was thinking that because I knew it was in the beer.

The first sip from the cup…is simply divine. A little heat, but a strong stout with barrel notes. There’s quite a bit in that sip and I’m very much looking forward to having more to explore the nuances of barrel character and addition of vanilla .

As I take further sips, that silky smooth character envelopes my palate like a luxurious blanket. The barrel character emerges more prominently, but *perfectly* accentuates the roasted malts of the beer rather than overpowers the flavor profile. Those elements by themselves would make this a world-class Imperial Stout, but then the Vanuatu Vanilla emerges. The only other beer I’ve had with Vanilla from that particular part of the world is Conclave’s Sable, I liked it in that beer and it is deployed flawlessly in this beer, too. It isn’t overpowering and like the barrel and blending portion of the show, is outstanding. What Matt Czigler has done with the gestalt of the base beer, barrel aging, blending, and Vanilla is surreal and sublime. I shouldn’t be surprised since Matt (as I noted in my spotlight on Czig Meister way back in 2018) spent time at Kane helping to develop a couple of their most highly regarded dark beers – A Night to End All Dawns and Morning Bell.

I was totally blown away by this beer, it was more than I expected to be and everything I hope to taste in a barrel-aged, blended stout. The beer is available in limited distribution in New Jersey in cans.

Congratulations to Matt Czigler, his family, and his crew on 6 years of brewing delicious beer. I haven’t had a bad beer from the brewery and this beer is a wonderful statement of their quality. If you’re within driving distance of Hackettstown, the brewery is more than worth the visit.