A very well made Tripel highlights a “young” brewery’s skill in a complex style. 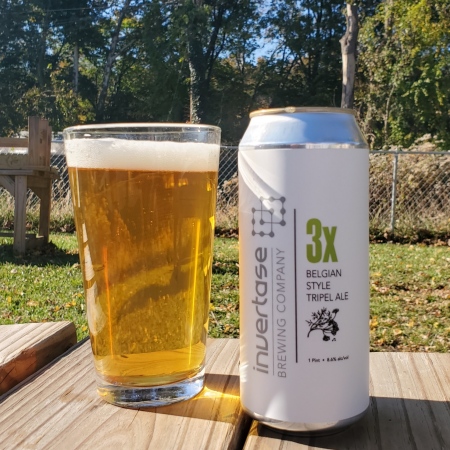 From the “our beers” section of Invertase Brewing’s Web site:

Classic Belgian Tripel. The very expressive yeast gives off notes of coriander and pepper with a hint of orange and banana. Moderate bitterness and a dry finish. Soft, pillow-like head with a light-golden color.

The annual birthday brewery tour hit the northwestern portion of New Jersey/Pennsylvania border along the Delaware River. On the New Jersey side, our second visit of the day was Invertase Brewing Company and this beer was the first I had during that visit, and the one I enjoyed the most.

Tripels are a classic Belgian style whose flavor largely comes from the yeast used in the beer. It is a style I like quite a bit but not a style you’ll see every brewery make, it isn’t the easiest style because you can’t typically hide mistakes with adjuncts. I think 3X was one of the first beers the fine folks of Invertase brewed shortly after they opened in late 2019. So how does it hold up?

The keg must have been tapped out because I was given a can, which is perfectly fine. The day was nice so our crew headed out to the biergarten where I popped open the can and poured a golden beer into the glass. Some Tripels I’ve enjoyed show slightly cloudy and unfiltered in the glass, this one is clear. The beer smells like a Tripel, hints of fruit from the yeast and an overall rather earthy aroma.

First sip gives a hint of the quality of the beer. I’ve got a smile on my face because this is very close to what I expect a Tripel to be. The esters / yeast give a hint of banana that is extremely pleasing to my palate.

With each sip I take from the glass, I enjoy the even beer. That fruit element comes through more potently, though not like I’m biting into a fruit that would be an amalgamation of a pear and banana. Rather, the hints of those fruits are extremely pleasant, not to sweet and offset the relatively high ABV of this beer. I say relatively because 8.6% is a right around the average ABV for a Tripel, at least the Tripels I’ve had and logged into untappd.

3X is an impressive Belgian Tripel for the balance and nuance in the beer from a brewery that has only been existence for slightly more than two years.

Tart & Thankful (4.9%), a bright and cheerful seasonal sour brewed with cranberry. Now available for taproom pours and crowler and growler fills. *A limited supply of 4-packs are also available.*

We collaborated with the team at New Jersey Craft Beer (@NJCraftBeer) to create this Thanksgiving-inspired sour ale. Dosed with Cranberry puree and lightly hopped with Vic Secret, this sour ale hits every mark for a sour and is perfect for sharing at the Thanksgiving feast. Contains lactose. 8 IBU.

I visited High Rail Brewing about two years ago, which was not long after they first opened and enjoyed the beers I had during that visit. When the Hunterdon Beer Trail came to be, I knew I’d be visiting again and that visit was pushed up when the good folks at High Rail collaborated with Mike and the fine people behind New Jersey Craft Beer on this cranberry (one of my favorite fruits) fruited sour.

The beer I’m handed from the draught pour is slightly pinkish. I don’t get too much of an aroma outside of maybe a slight funk as well as the cranberries.

The first sip is really nice, with a noticeably pleasant hit of cranberry.

Halfway through the beer, I’m struck by how well balanced and approachable this beer is. Let me unpack that statement. Some sour beers are very potent, which can potentially be off-putting. Tart & Thankful is far from off-putting, sure it is sour, but damn is it inviting. The sour is a slight tap to the cheek to assert itself. The cranberry element is fairly abundant and the addition of milk sugar/lactose balances out how highly tart cranberry can be. My only issue here is that I wish there was more cranberry. But as I noted above, cranberry is one of my favorite fruits (I drink cranberry juice everyday and love a cranberry smoothie for breakfast) so I may be an outlier.

Tart & Thankful is an outstanding beer, probably the best beer I’ve had categorized as “Fruit Beer” on untappd. As a fruited sour, I love it. It is refreshing, light, clean and overall just about everything I’d want in a beer that has sour elements and cranberries in it. Well done Highrail and New Jersey Craft Beer.

This beer is available only (I think) at the brewery on draft and in cans. Perfect for Thanksgiving, or anytime. It is a beer that is well worth visiting the brewery to enjoy. And while you’re there, enjoy more from Highrail because they make tasty, approachable brews.

A delicious, balanced fruited sour perfect for the autumn/winter season.

Description of the beer:

Laniakea is our famous bourbon barrel-aged imperial stout… made just once a year, and every year is in different barrels. This year we got some amazing Woodford Reserve barrels to perfectly complement this 10% ABV monster. Notes of dark fruits, vanilla, caramel, toffee, chocolate, and roasty coffee abound—all contributed solely by the use of premium British malts and these gorgeous bourbon barrels. It’s the perfect thing for helping you face the first winter storm of the year.

So what do we have here from The Alementary?

I’m handed a beer that is very black, maybe not as quite as black as the last RIS I reviewed last week, but still very much looks the part of a big Russian Imperial Stout. Bourbon is strong on the nose, which is quite inviting.

The first sip is extremely tasty. I get all of the stout/malty elements of the beer including the hallmark “bite” of a Russian Imperial Stout. The bourbon barrel adds a nice shot of heat at the end. The more I sip from the glass, the more the complexity of the beer emerges.

This is a delicious beer, first and foremost. Like a lot of beers aged in some kind of wood, hints of vanilla emerge. Those hints complements the inherit coffee elements that come from the malts in a Russian Imperial Stout. There might be some other hint of flavor present, maybe chocolate? I say that because I get hints of chocolate from may big stouts and I think that’s what I’m tasting here. Whatever it is, the balance of flavor elements from the roasted malt – chocolate and coffee – play extremely nicely with the barrel characteristics of bourbon and vanilla. I took my time with this beer and was rewarded.

I enjoyed this during a birthday dinner with my parents, they each had a sip and liked it quite a bit, too. Hands down, this is the best beer I’ve had from The Alementary.

How does this compare to other Bourbon Barrel Aged Russian Imperial Stouts? Quite nicely, maybe a little shy of the best of the best. That’s not to say Laniakea is a bad beer, it is very good. This is a beer I’d seek out again and recommend seeking out. I had it on draft at Paragon Tap & Table in Clark, NJ, but bottles of this should be available in relatively limited quantities in The Alementary’s NJ distribution footprint. 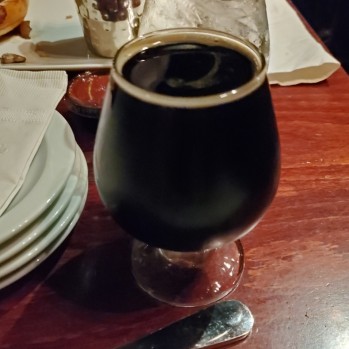 Stout season is officially here! A couple of beers on this month’s edition of the Tap Takeover Six Pack are seasonally appropriate in that regard and one, a porter, fits the mold too. I made two visits to Kane Brewing this month and a visit to Icarus, so those breweries made up much of what I enjoyed in October 2021 even if only one from each appears. Four beers from New Jersey, on from New York and one from Germany. Let’s get on with it, shall we?

Twin Elephant gets a lot of love for their IPAs (and rightfully so), but their dark beers have been my jam since they launched five years ago. This one is a perfectly balanced dessert beer. The peanut butter is great and blends with the vanilla and banana very nicely. Too may beers with peanut butter in them use powder or the peanut butter tastes like a stale Reese’s Peanut Butter cup. Not this beer, oh no. This is delicious.

This is the first Kölsch / Kölsch style ale from Icarus and boy howdy is it delicious. I enjoy a good Kölsch and this is one of the better ones I’ve ever had. Very glad to see a style like this come out of a brewery largely known for IPAs and boozy stouts. But I shouldn’t have been surprised in the least about the quality of the beer because for my tastes, Icarus simply doesn’t make bad beers. That may be relatively clear since they make more appearances here, in both the Monthly Six Packs, and the Tap Takeover in general, than any other brewery.

Sometimes a good, classic German Pilsner hits the spot. That’s exactly what this beer did for me. It is always nice to get the beer in not just Proper Glassware, but glassware with the brewery’s logo on it made specifically for the specific beer. Maybe that helped with the enjoyment a little bit, but the beer itself is tasty enough. Regardless, this was good, but nothing mind blowing.

Ross Brewing has come out pretty strongly this year, producing interesting looking beers. This decadent stout is just the second beer I’ve had from them and it is an impressively crafted, boozy stout. Roasted malt and bittersweet chocolate are the signature flavors here.

I’ve enjoyed some of Grimm’s lighter offerings so I wanted to sample this big, boozy (12%) Dessert Stout. When added appropriately, cinnamon is a nice adjunct and that’s the case with this beer. Hints of cinnamon and cocoa make for a delicious evening sipper. I was a little worried when I had the first sip of the beer, but once it warmed up a little bit, I was able to thoroughly enjoy this beer. 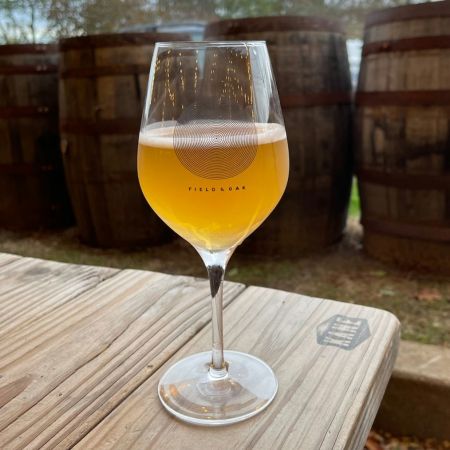 Under the Field & Oak brand, Kane Brewing has been in the process of making some Belgian inspired beers on the lighter side – Saisons, Grisettes, Lambics. Beers that have funk and some kind of fruit. This Grisette was the first one of those beers I sampled and I could have enjoyed an unending glass of this beer all day. The oak aging lends a hint of vanilla. Slightly funky, effervescent, and delicious.

That’s all I have to say about that.