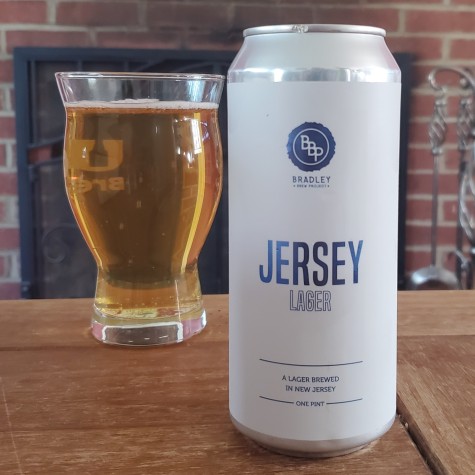 Since having my first beer from Bradley Brew Project about a year ago, I’ve been sampling more of their beer and each one has impressed me equally. When I saw their American Lager named simply “Jersey,” I figured I’d give it the full-feature treatment here at the Triple T. Because how could I say no to a beer that proudly proclaims the name of the state right on the label?

From the can, the beer pours into the glass a translucent golden yellow. Essentially, when you say “beer” to most people, something like this beer is the image that would likely come to mind for them.

The aroma…nothing crazy, it smells like beer. First sip and I think, “That’s a nice Lager.” Upon subsequent sips and gulps, Jersey delivers a thirst quenching, beer-flavored-beer to my palate.

Saaz hops are a very traditional hop, a Noble Hop, if you will, utilized largely in lagers and a primary hop utilized for many pilsners and pale lagers. Motueka, on the other hand, is a more tropically leaning hop that is often used in IPAs and I’ve really enjoyed IPAs that feature Motueka. What the Motueka hop brings to this beer is that aforementioned slightly citrusy element and an overall sweetness that balances out the classic, earthy and spicy element the Saaz hops imbues into the beer. They complement each other quite nicely and I’d be interested in sampling more lagers, and specifically Pilsners, that feature Motueka hops.

Sometimes you just want a straight-forward, no-nonsense, yet flavorful beer to quench your palate. A beer that hits the senses the way a beer should, with the malt and hop elements in harmony. Jersey does that for me. The label is simple, straight-forward, like the beer itself, which I appreciate all the more. It is an excellent lager and more evidence that Bradley Brew Project brews some of the best Lagers in New Jersey. The four beers I’ve had from them have all been lagers, all four have been of high quality, including this latest one in my fridge, the wonderfully named Jersey.