This week’s brewery focused post features another of the “Hackettstown Trio” of NJ Craft breweries which was part of my fall 2017 New Jersey Brewery Tour: Czig Meister Brewing Company which is literally around the block from Man Skirt Brewing (featured here: https://thetaptakeover.com/2017/12/14/draught-diversions-man-skirt-brewing/).

Czig Meister opened its doors and taps to the public in June 2016, but  President/CEO Matt Czigler’s beerstory began long before that. Like many brewery owners, Matt began homebrewing, but then unlike many homebrewers, formally educated himself at Siebel Institute of Brewing Technology in Chicago. Once the formal education concluded, Matt eventually found himself in about as great a gig as one could hope for in NJ Craft Beer – head brewer at NJ’s iconic Kane Brewing. As it turns out, Matt had a big impact on Kane. His recipe for A Night to End All Dawns, an Imperial Stout aged in Four Roses Bourbon Barrels, won gold at the Great American Beer Festival in 2014. He eventually left to start what is now Czig Meister Brewing. All of this happened before he was even 30 years old. Very impressive indeed. (This is a very truncated version of what appears on Czig Meister’s About Us Page.

But what about the brewery, where it is, and the beers produced by Czig Meister?

The location: Czigler managed to secure himself a really great space, a big, eye-catching brick building that was once a Ford maintenance garage. The ceiling is high, with barrels stacked in some spots. Perhaps what is best about the space is how open and welcoming it is. There’s an outdoor seating area / Biergarten and I think the big old garage doors open up to allow great airflow. Of the five breweries I visited on that cool November afternoon/evening, none were as packed and hopping as Czig Meister. Granted, some space was cordoned off and rented for a party, but there were enough people milling about enjoying fine beer that I suspect it still would have been the busiest brewery that day. Because it was so packed and the schedule for the day was pretty tight, I didn’t have the opportunity to snap any photos from inside the brewery.

The beers: I did manage to get a flight during my visit and all four beers were good, with one bordering on great. One of the beers I had was one of Czig Meister’s “Forge Batch” beers, which are the single-keg, experimental, brewery only releases. In this case, it was a “Blueberry Imperial Saison” (Forge Batch 9.8) and boy did it hit the spot. A lovely beer, the tart/sweet of the blueberry balanced out the yeast and earthiness of the Saison. I’d drink this all through the spring, if I could.

The second beer in the flight was Chaos, Czig Meister’s interpretation of a Belgian Dubbel, which was spot on from a stylistic / flavor profile standpoint. The third beer in the flight was one of their flagship brews, Blacksmith, an Oatmeal Stout that was more roasty and smokey than I’d expect from a stout, especially an oatmeal stout. Almost more like a porter than a stout to me. The final beer was Habonde, and outstanding Barley Wine aged in Wild Turkey Bourbon Barrels. I’ve seen this one in local bottle shops, too. I’d highly recommend it to folks who enjoy Barley Wines. I think this is also the Barley Wine that cemented the fact that I enjoy Barley Wines in the English, rather than American style.

Speaking of bottle shops, sometime last year, I started seeing Czig Meister beers in shops near me in Somerset, Middlesex, and Hunterdon Counties, NJ. Again, this is really impressive – having a growing production brewery (compared to some of the smaller breweries in NJ) able to crank out beers consistently enough to gain continual distribution is no small feat. It seems Czig Meister’s core beers are the aforementioned Oatmeal Stout Blacksmith, as well as The Huntsman (Kölsch), Falconer (American Pale Ale, which I suspect would be similar to Sierra Nevada’s Pale Ale especially with the green can), Prospector (Amber/Red Ale and Matt’s favorite, according to the Website and my links below), and The Shipwright (American IPA). 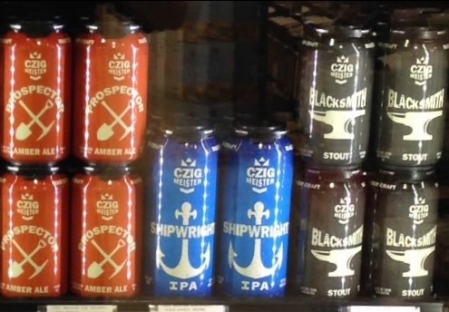 Of course Czig Meister has some regular seasonal brews and Special Releases, too. The next one I plan to try from them will have to be either Upon the Shattered Cliffs an Imperial Milk Porter (a collaboration brew with Bolero Snort) or the Dopplebock they call Chieftans Covenant.

Between the variety of beers they produce (over 200 distinct beers as of this writing), the busy atmosphere, great location, and portfolio of beers in distribution, Czig Meister has made a great mark on the NJ Craft Beer scene in less than two years. I know I would like to visit the brewery again and at the very least, continue making my way through the variety of their beers I see at my local bottle shops.

Like many breweries are doing, such as the Brews and Board Games club that meets monthly at Lone Eagle Brewing Czig Meister has regular events at their brewery, including a regular trivia nights. Bottom line, Czig Meister is worth making the drive up to Hackettstown on its own. Add the other two breweries in the town (Man Skirt and Jersey Girl), and the trip is almost a must for people interested in sampling fine New Jersey beer.

A final aside: As it turns out, the younger brother of one of my fraternity brothers works at Czig Meister and has been there since the brewery opened.