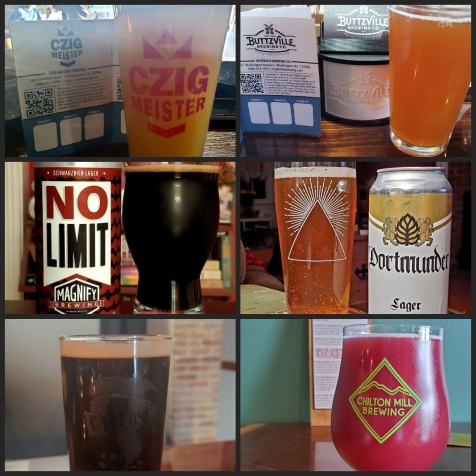 April was a fun month for beer as a few friends and I (with my ever-awesome wife taking cat-wrangling/driving duties) tackled the Skylands Ale Trail, which consists of 6 breweries in Warren and Sussex County. Alphabetically those breweries are Angry Erik Brewing, Buttzville Brewing Company, Czig Meister Brewing, Invertase Brewing Company, Jersey Girl Brewing, and Man Skirt Brewing Company. This past month, I’ve reviewed two beers I had during that journey across the breweries (Angry Erik and Man Skirt) and will feature a couple of beers from other breweries on the Skylands Ale Trail below.

One of the breweries (the last brewery we visited during the journey and a brewery I first visited back in 2017); however, shall not be named in this blog henceforth. This is despite the fact that I had a good beer during the visit. They shall not be named because the individual overseeing the taproom was extremely surly and rude to my wife and I. The overall vibe at this brewery was not too welcoming, at least from the folks working at this establishment. Let’s just say the brewery who shall not be named was a major guilty party in my post about Date Coding in Craft Beer since this brewery has the ability to stamp their beer with something, but instead of a date, they put a dumb phrase or song lyric. Bottom line, I won’t be visiting or purchasing their beer in the future.

Enough of my rambling, here’s the Six Pack for April 2022, where all but one of the beers is from a NJ Brewery…

Czig Meister is always a highlight for me and they are one of my overall favorite breweries in the State of New Jersey. I had a few beers during the visit and brought some home, but this IPA is the standout for me. Czig’s “Abyss” Series of New England IPAs are always excellent and this one is no exception. I especially appreciated the lack of aftertaste because this beer had a lovely, smooth finish that complemented the great blend of tropical hops.

This was my second visit to Buttzville, I really enjoyed my first experience there so I was looking forward to sampling their beer again. I decided on a Hefeweizen and this beer, a “fruited session ale” with raspberry, passion fruit, guava, and citrus puree. The beer element was still very present, meaning the fruit elements were not overpowering and were introduced into the brewing process very smartly. This would be a great beer to enjoy in the summer or warmer months.

Magnify is known more for their IPAs and Pastry Stouts, but when I saw they brewed what they call a Schwarzbier (and is listed on untappd as a Lager – Dark) I wanted to try the beer. I was pleased, the beer has a little more roasty bitterness than I like in Schwarzbiers, but it is a very solid effort from the North Jersey brewery.

When I saw this beer pop up on Tavor, I figured what the hell, I’ll give it a try. I’ve enjoyed the Dortmunder Lagers I’ve had, including Bull N’ Bear’s great take on the style. Lupulin Brewing (out of Minnesota) is known, from what I’ve gathered, primarily for IPAs. If this beer is an indication of the overall quality of their portfolio, then they are a damned fine brewery. Smooth tasting, with elements of toasted crackers and a sweet finish, I could drink this all day 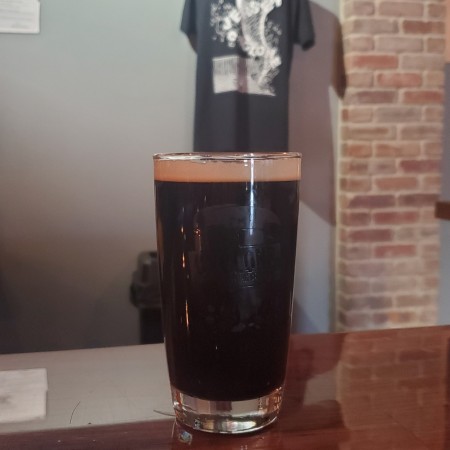 Although I’ve been enjoying some of the regular rotation beers from Jersey Cyclone I’ve picked up at local stores, it had been too long since I stopped in Jersey Cyclone brewing for some freshly poured beer. This beer had all the things I’d like in a dessert stout, Black Forest Cake is a favorite dessert and this beer does a great job emulating the cake. Sweet, rich thickness, and a wonderful gestalt of Cherry, Chocolate, and Vanilla. In no way, shape, or form does this beer drink like an 11.5% beer. Because it is 11.5% ABV, it was only offered in tasters and half pours, no full pints on this one.

I’ve been hearing good things about Chilton Mill Brewing for quite a while now and I’ve wanted to visit them to sample their wares. I finally did this past month and was extremely impressed with this beer. Blueberries are one of my favorite fruits and this beer has blueberries in spades, but the “Fuzz” in the name is from the peaches which come across on the finish of the beer. The beer is a seamless transition from blueberry to peach and simply delightful. If Chilton Mill can pull off a beer with these flavor elements so successfully, I’m eager to try more of their beer.

While the above clearly indicates I had some really good beer, as do the beer reviews I posted this month, it was unfortunate that I had to add another NJ brewery to the “never patronize again” list, as I mentioned in the opening paragraph. On the other hand, there are well over 100 breweries in NJ and plenty within close proximity to me so it isn’t like I’m wont for a good place to get good beer.

A very well made Tripel highlights a “young” brewery’s skill in a complex style.

From the “our beers” section of Invertase Brewing’s Web site:

Classic Belgian Tripel. The very expressive yeast gives off notes of coriander and pepper with a hint of orange and banana. Moderate bitterness and a dry finish. Soft, pillow-like head with a light-golden color.

The annual birthday brewery tour hit the northwestern portion of New Jersey/Pennsylvania border along the Delaware River. On the New Jersey side, our second visit of the day was Invertase Brewing Company and this beer was the first I had during that visit, and the one I enjoyed the most.

Tripels are a classic Belgian style whose flavor largely comes from the yeast used in the beer. It is a style I like quite a bit but not a style you’ll see every brewery make, it isn’t the easiest style because you can’t typically hide mistakes with adjuncts. I think 3X was one of the first beers the fine folks of Invertase brewed shortly after they opened in late 2019. So how does it hold up?

The keg must have been tapped out because I was given a can, which is perfectly fine. The day was nice so our crew headed out to the biergarten where I popped open the can and poured a golden beer into the glass. Some Tripels I’ve enjoyed show slightly cloudy and unfiltered in the glass, this one is clear. The beer smells like a Tripel, hints of fruit from the yeast and an overall rather earthy aroma.

First sip gives a hint of the quality of the beer. I’ve got a smile on my face because this is very close to what I expect a Tripel to be. The esters / yeast give a hint of banana that is extremely pleasing to my palate.

With each sip I take from the glass, I enjoy the even beer. That fruit element comes through more potently, though not like I’m biting into a fruit that would be an amalgamation of a pear and banana. Rather, the hints of those fruits are extremely pleasant, not to sweet and offset the relatively high ABV of this beer. I say relatively because 8.6% is a right around the average ABV for a Tripel, at least the Tripels I’ve had and logged into untappd.

3X is an impressive Belgian Tripel for the balance and nuance in the beer from a brewery that has only been existence for slightly more than two years.