An extremely tasty and impressive interpretation of the monstrous Belgian Ale. 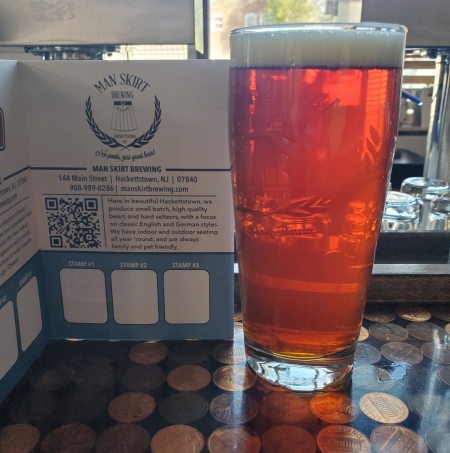 From the untappd entry for the beer:

Clocking in a whopping 13% ABV, our Belgian Quad is deceptively easy drinking. Golden in color, it’s rich and malty but without the cloying sweetness that can overpower a beer this strong.

Man Skirt Brewing is one of the “Hackettstown Trio” of breweries and a central brewery along the Skylands Ale Trail. Like Angry Erik Brewing, I visited Man Skirt for the first time during the 2017 Birthday Brewery tour. On the first leg of the journey through the Ale Trail with my friends, Man Skirt was the second brewery we visited. I’d visited a few times in the past and, by and large, I’ve enjoyed their beer and always found the folks at the brewery to be very friendly and welcoming. I don’t see too many Belgian Quadrupels on draft at the smaller/local breweries so I knew I had to try this one. Plus a friend on untappd gave the beer a very high rating.

The beer I’m handed is slightly more translucent and not quite a dark brown as I’d expect from a Quadrupel. The aroma is there, though.

That first sip…is quite impressive and flavorful. The beer delivers what I hope an expect from a Belgian Quadrupel. My impression is that this is a flavor-filled beer and quite sweet. The yeast evokes tastiness like stone fruits, like plum? and caramelized banana. Like the best Quadrupels, this beer is quite complex. What I find most surprising is that, despite a 13% ABV, it wasn’t as boozy as I’d expect. Don’t get me wrong, I noticed the alcohol presence especially as less and less of the beer was in my glass, but it wasn’t an overpowering hit of alcohol.

This is the biggest beer I’ve had from Man Skirt, out of the dozen or so I’ve had and it was maybe the best I’ve had, too. While I liked their pilsner, Czechs and Balances for its clean, straight-forward flavor profile, I like the complexity here in Quadrupel Take. My point here is that Joe Fisher and his crew at Man Skirt can make quality beer across a range of styles, and high quality in two of the more complex styles to brew.

I don’t know how often Man Skirt brews this beer, but it is worth seeking out when they do brew it.