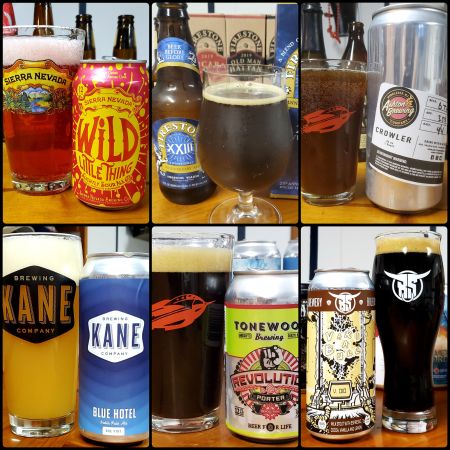 Another mostly NJ six pack for April, although a couple of beers lingered from before the Social Distancing began in March. One of the new beers comes Ashton Brewing Company a brand new brewery in New Jersey, whose “grand opening” coincided with the big lockdown. After months of preparation and remodeling the old Demented facility in Middlesex, NJ, Ashton rolled with the punches and did Crowlers and pre-filled growlers to go, as well as local home delivery. More on that, and the six pack for April 2020 below.

An offshoot of the “Little Thing” brand I mentioned last month, this beer is sweet and tart. There are a few different fruits in this one, but I get a great deal of strawberry. Almost like if Strawberry Jam were added to a beer, which isn’t a bad thing. This would be a really nice beer to enjoy in the summer.

It seems that whenever I get one of the Firestone Walker Barrel Aged beers, it makes an appearance on the Tap Takeover. This one is no exception and is an extremely boozy, but wonderfully flavored beer. I haven’t had any of the previous Anniversary beers, but I’ve been very happy to see these special, single-bottle releases in my local shops in recent months. A definite slow sipper, which I enjoyed during a work virtual happy hour.

Ashton Brewing is New Jersey’s newest brewery and they started in an interesting time, but fortunately, they make interesting beer. Steve Ashton has been in the beer/brewing world for years and his craftsmanship shows in this tasty beer. I’ve had very few English Milds, but what impressed me was the complex flavor given the very low ABV (3.5). I’ll be visiting Ashton more in the future and I cannot wait to spend some time in the revamped former Demented Brewing tap room. Based on this beer (and the other I had) Ashton Brewing is off to a great start.

One of the few positive outcomes of COVID is that some breweries are making more of their beer available to stores and through home delivery. Case in point: Kane Brewing’s Blue Hotel was previously only available at the brewery. This is a delicious, tropical IPA whose potent flavors come from a single hop – Galaxy Hops.

This is the third Tonewood beer for me and third time their beer appears on the Tap Takeover. That’s one way to say they make really good beer. This is a really solid coffee-infused porter with great roast flavor that one expect from a Porter complemented with the roast of coffee flavors. There’s a bit more hoppiness to the beer than I would have expected, but the beer settles nicely. I found myself enjoying the second can of beer more than the first, which I enjoyed a few days apart. Glad I still have a few in the fridge, because this is just simply a well-made porter.

I’ve had quite a few beers from Bolero this year and I have to say, this is my favorite so far and maybe the best beer I’ve had since they opened their brewery. I’ve always enjoyed their dark beers more than anything else they brewed and this Tiramisu-inspired stout is outstanding. I like Tiramisu as a desert and the flavors translate so well into a Milk Stout. Layered flavors from Coffee/Espresso, Cocoa, Vanilla, and touch of Lemon at the end make for a beer to enjoy slowly as it is a sumptuous, decadent dessert. At 8% it works really well as a nice night cap to enjoy while (as I did) watching an engrossing movie (The Invitation). Bolero released two other Variabull Stouts at this time, a “dirty banana” version and a mint chocolate version. I only had the banana (not a mint fan) and this one worked far better for me..

Not too much other new beers in April as I was sticking with some older favorites, but some good beers nonetheless.