June…the start of summer and the prevalence of lighter, more “crushable beers. Light lagers, Helles Lagers, Pilsners, Shandys/Radlers, Wheat bears, maybe some beers with a fruit component. All beers to enjoy by the pool, outside lounging about, or just after finishing yard work.

June’s beers included quite a few of these, but probably the least number of New Jersey beers in a month since I started this blog. Of course I did manage to squeeze in one (in addition to visiting Fort Nonsense the first Saturday in June).

Harpoon is one of the great American Craft breweries and I’ve enjoyed many beers in their portfolio over the years. A couple of years back, they spun off their UFO beers into a separate line, almost like Stone did with Arrogant Bastard. I’ve liked the core UFO beers (Hefeweizen, White, and Raspberry), but this one is definitely not for me. I’m not a fan of Pink Lemonade in general and mixed in with beer, I like it even less. This beer is one reason the mixed six pack is great, I didn’t have to get a full six pack just to try this beer.

Firestone Walker is jumping on the bandwagon of Light Craft Lagers, or rather the bandwagon is catching up with them. This is a beer the brewery produced many years ago, but only recently with the craft market wanting the light lagers, has this beer been released on a larger level. I’ve really come to enjoy Helles Lagers over the past year and this is a really nice example of the style: refreshing, delicious, crushable, and perfect for cooler filling. (I also had their flagship IPA Union Jack for the first time this month and loved it.) 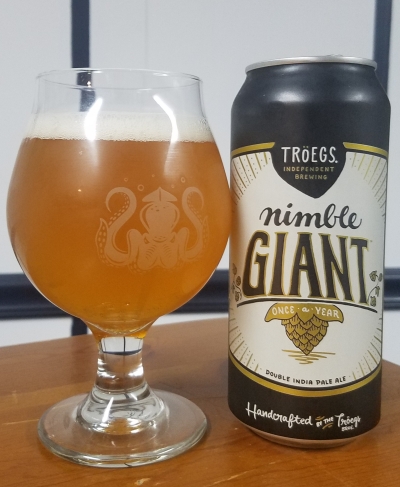 Tröegs seems to make an appearance here regularly and this is their big, once-per-year double IPA release. A year ago, I would have avoided this one. This is a fantastic IPA with citrus notes and a little piney-ness. The hop level is high, but it isn’t all that bitter. A bright, potent IPA that is another must have from Tröegs.

I’ve been quite excited about Bell’s entry into NJ distribution. Two-Hearted (IPA) is a Great American beer, but this sweet wheat ale is slightly under the radar. Pooltime Ale is *almost* a Witbier with some of the Belgian notes, but not quite. The additional of “Michigan Cherries” to the base beer make for a supremely refreshing all that is perfect for what it says it is right on the can – a pooltime (or poolside) summer ale. This is a new summer favorite for me.

Sierra Nevada needs no introduction to the craft beer world. In addition to their iconic Pale Ale, Sierra distributes variety seasonal 12 packs and this spring/summer, one of the beers included is a relabeled classic from their line-up: a Kölsch. Kölsch ales are German-style ales that are light and easy drinking. In other words, perfect for warm weather. I enjoyed the heck out of this beer and could see grabbing a six for the cooler I keep by my pool.

June seems to be all about Berliner Weisses here at the Tap Takeover, but damn are they great ales for warm weather. Augie Carton and his cadre of brewers delivered a very tasty one in this take on the classic German style. The fruit is fairly subtle compared to some other Berliner Weisses I’ve had, but pears don’t quite explode with flavors the way raspberries do, for example. This one hit the spot perfectly.

Honorable mention to an annual Summer Favorite: Sierra Nevada Summerfest. This is Sierra’s take on the Czech pilsner and is always a welcome beer in the summer.