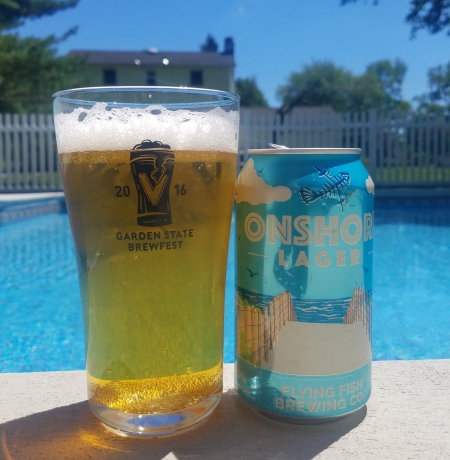 From the beer’s description on Flying Fish Brewing’s Special Page dedicated to the beer:

Our home is surrounded by a breathtaking stretch of ocean and beautiful waterways, and ONSHORE LAGER is our tribute to that environment. Brewed without adjuncts, this beer pours a pure, golden color, and German-style hops provide a crisp, clean finish. The employees of Flying Fish are just like you. They enjoy the great outdoors with family and friends, and they want to ensure the beauty endures for generations to come. That’s why Flying Fish is not only committed to brewing high quality beers, but we also practice sustainability and care for the environment throughout the process. 463 solar panels help with our electricity needs, 19 solar tubes in our warehouse reduce the need for artificial lighting, recaptured steam in the brewing process minimizes water waste, and rain gardens on site prevent erosion. And spent grains? They go to local farms with happy cows.

Light Lager is perhaps the most popular style of beer in America. Conversely, it is probably the most maligned style in the craft beer world. The brewery once out of Saint Louis and the brewery out of Colorado whose Light Lagers are the two most popular beers in the world. Though popular, those two beers are absent of flavor, or at least *good* flavor. But like almost any style of beer, when done well, the beer can taste very good.

This brings me to Onshore Lager from one of New Jersey’s oldest independent breweries and the largest in the state, Flying Fish Brewing Company. This beer is a new (first available in June 2018) year-round offering from Flying Fish.

After popping the can, the beer pours a bright golden yellow into the glass with a nice fluffy head. This is a much brighter beer than some of the macro-produced light beers people are accustomed to seeing, it is quite inviting. The first sip was more than I expected, the malts and crispness of the lager come through really nicely. Even though this is a light lager with an ABV of 4.9%, the beer still as ample flavor and a decent body. Light Lagers are a style I almost never get, go out of my way to try, and I’ll even avoid them if possible. This beer, on the other hand, this is a good beer to always keep in the cooler, whether poolside, to enjoy after yardwork, or tailgating. I’ll be honest two days after I had the first one from the six pack, I had another and enjoyed it even more.

Over the past couple of years, there has been a movement in the craft beer world back to low ABV lagers: pilsners, light lagers, Helles Lagers. Firestone Walker’s simply named Lager is a great example, as a I mentioned recently and Founders Solid Gold seems to be doing well. Far be it from NJ’s elder states-brewer to stray from this trend, as this beer was first announced back in February and I was thinking back in May it might be a good crushable summer beer. I was more than pleasantly surprised with the full flavor of this beer. I’ll admit that I hoped it might lean more towards a Helles Lager style, and there’s a bit of that bready/grainy/toasty element to the beer, but much more subtle than a straight-up Helles Lager like Firestone’s Lager or Carton’s This Town. Suffice it to say, Onshore Lager is an excellent beer and like Bell’s Amber Ale, which I featured a few weeks back, is a perfect beer to ease folks wary of craft beer over to the craft beer/Independent Beer world.

It is really great to see a brewery that has been such a mainstay in New Jersey continue to push new beers regularly not even including the recently concluded Exit Series. Onshore Lager is about the sixth new beer Flying Fish has introduced in the last six months alone. What I think would be great is for them to offer a can mixed pack like many breweries are doing – throw a few of these, a few of their summer staple Farmhouse Summer Ale and Daylight Savings IPA together and you’d have a really solid mix of beers for a Summer variety pack.

As reported in a few online beer sites, including Brewbound: “a portion of the sales of Onshore Lager will go to New Jersey-based Clean Ocean Action, an organization that’s dedicated to the quality of the marine waters off the New Jersey coast.” So, two great combinations – a great beer and a great cause. If you see some Onshore Lager, pick up a six pack to share, or keep in the fridge for yourself.