It is officially Flagship February in the beer world, a “movement” started by beer writers Stephen Beaumont and Jay Brooks a couple of years ago and it is wonderful idea. Basically, we as beer drinkers should remember the beers that helped to lay the foundation for craft beer. Beers like Sierra Nevada’s Pale Ale or, as I posted a couple of years ago, as part of my American Craft Beer Classic series of posts, Allagash White. 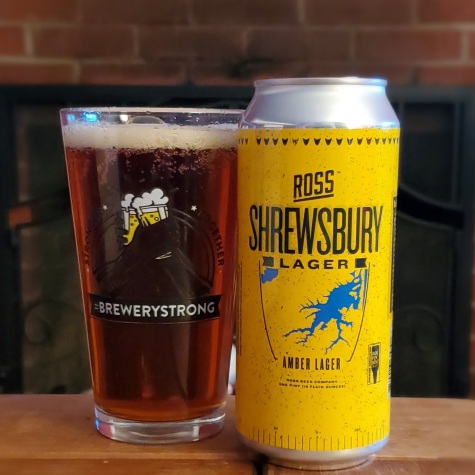 For the 2020 iteration of this “celebration,” I featured two of the NJ beers that helped to establish the craft beer landscape in New Jersey. The creators of Flagship February decided to shift slightly with their focus to highlighting breweries and what they see as their Flagships in 2021 given the drastic changes the COVID Pandemic has forced upon the world. As such, I thought I’d similarly shift with a newer brewery who is set to open their doors during these turbulent times: Ross Brewing and the beer they are announcing as their Flagship Lager, Shrewsbury Lager. So the beer sort of eschews the traditional historical component of the “foundational” idea of Flagship February, but it is the beer the brewery calls their Flagship.

Ross Brewing Company has been around for a couple of years, contract brewing small batches for distribution in New York, but late 2020/early 2021, they made a big push into the NJ Craft Beer scene, their home state. After a few setbacks prior to the COVID Pandemic, then the COVID Pandemic, Ross Brewing is looking for a mid-2021 opening in Middletown, NJ. Like every brewery, they’ve got an IPA as one of their top beers, at least by number of Check Ins in untappd. But I’m featuring one of the more “taken for granted” styles, the Amber Lager. Here are the stats for the beer, in the standard Tap Takeover format.

From Ross Brewing’s landing page for Shrewsbury Lager: Our flagship lager is inspired by the river that runs to the south of our hometown of Red Bank—the scenic Shrewsbury. Low in bitterness and high in malt character and complexity, the subtle use of hops makes a balanced, refreshing lager with a crisp, dry finish, perfect for drinking on a boat, a beach, a deck, or just about anywhere!

Let’s take a look at this beer, or rather, here is what I think of Shrewsbury Lager.

In the Northeast (and more of the US recently), one beer epitomizes the American Amber Lager and it is the beer that can simply be ordered at the bar as “Lager.” That beer, of course is Yuengling’s Lager. It is a beer everybody knows and everybody has had. Ross Brewing’s Shrewsbury Lager is of the same style.

The look test: a pour into the glass reveals a deep amber beer, which is exactly what it says on the can. I’d say this is a bit darker than Yuengling’s take on the style, which is a hint to me that this beer might be more flavorful.

The first sip test: this beer is flavorful, refreshing, and whispers: “there’s more, don’t stop there.” I listen to that whisper and continue, realizing Shrewsbury Lager has some pleasant and subtle sweetness from a nice malt profile. The beer has just enough substance that it has great flavor, but it isn’t overpowering, making for a beer that lends itself to enjoying a couple to few pints in a row. In other words, this beer is a crusher.

There’s also a slightly toasted element to the malt profile of the beer, with hints of caramel. Those elements come together very harmoniously making for a very altogether flavorful beer floating at 5% ABV level. The longer lagering process allows for flavors to develop and mature during the brewing process, which seems to be exactly what happened with this beer.

What does this all mean? The fact that Shrewsbury Lager is both a launch beer and the flagship Lager for Ross Brewing is very impressive.

This beer works as an everyday beer that could sit in the cooler, sit at the dinner table with just about any meal that asserts enough flavor on its own, but won’t overwhelm whatever meal with which you pair the beer. With each can I had over the course of a few days, I found myself enjoying the beer more each time, appreciate the elegance of the beer and finally, with the fourth can in that four pack, wishing I had more.

Back to the Yuengling Lager comparison…I think it is a very smart move for a brewery to brew / can / sell a beer that is comparable to the most ubiquitous non-Macro Lager because it works perfectly as a beer to introduce craft-wary consumers (admittedly, a shrinking group of people) to more flavorful, local options especially folks who may be averse to “hoppy beers.”

Bottom line, if Shrewsbury Lager is any indication of Ross Brewing’s abilities, then they are definitely on the right track to success. It most definitely is a beer worthy of “Flagship” status.

Untappd badges earned with this beer: