I realized it has been far too long since I did an American Craft Beer Classic post, but like the most recent one back in January, this post features a Belgian-inspired beer. Perhaps the most well-regarded and well-known Belgian-inspired beer. It is the beer that is easily the most accessible of American Craft/Independent beers, and despite the ubiquitous nature of the beer, an absolute delight to drink. I think many will agree: Allagash White is the standard bearer for Belgian Witbiers. Full stop. 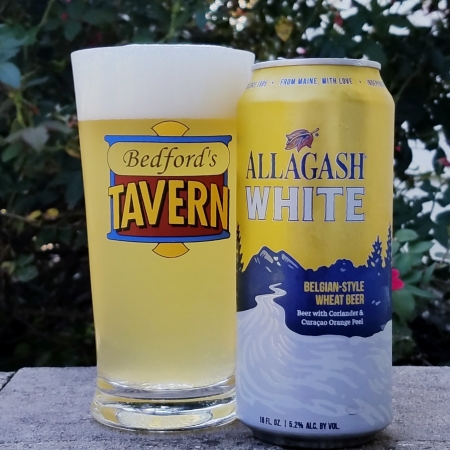 It was 1995 and American Craft/Independent Brewing was in its infancy. Samuel Adams’ Boston Lager, Pete’s Wicked Ale (that’s a whole story in and of itself), Sierra Nevada Pale Ale, and Widmer Brothers were probably the most prominent non-macro beers in stores and in bars: a Vienna Lager, a Brown Ale, a hoppy Pale Ale, and  a Hefeweizen. Breweries like New Belgium, Yards, and Dogfish Head were still in their infancy and Bell’s Brewery hadn’t yet reached their current size. Victory Brewing, Stone Brewing, Tröegs Brewing had yet to open. Breweries were focusing on beers more along the Germanic and British branches of the brewing tree. Enter Rob Tod and Allagash Brewing with their focus on Belgian inspired styles, something very few breweries outside of Cooperstown, NY were doing at the time.

Let’s just quickly look at that again: This beer has been part of the beer landscape for nearly 25 years and it has remain largely unchanged. That is one clear indicator of the beer’s quality even if the beer itself is not exactly clear. Out of the bottle, it pours a very bright, but hazy straw yellow. Not exactly white, granted, but compared to a golden yellow pilsner, an amber-hued lager or IPA, or a stout, the beer is as close to white as a beer can get. Like many wheat beers, this one is unfiltered and the instructions on the bottle and can indicate that you swirl and dump the sediment, which adds to the cloudy straw color. The look of the beer, with a white head, pops wherever it sits and the look combined with the aroma seductively whispers to the beholder, “Drink me.”

From a style perspective, the Witbier itself is a very versatile beer.  Like a pilsner, a Witbier is fairly straightforward and when done well, is extremely flavorful. That flavor profile won’t conflict with many foods and compliments just about any meal. Yet there’s a beautiful balance to Allagash’s take on the style from the hints of clove, a bit of coriander, and the all-important wheat that puts the Wit in Witbier.

At 5.2% ABV, the “versatility” of Allagash White is even more evident. That relatively lower amount of alcohol allows the beer to be a sessionable ale you can enjoy throughout the day at a pool party, barbeque, a cool fall festival and through the night by the fire pit. Allagash says this about the beer on their web site:

Our interpretation of a Belgian-style wheat beer is brewed with oats, malted wheat, and unmalted raw wheat for a hazy, “white” appearance. Spiced with our own special blend of coriander and Curaçao orange peel, Allagash White is both complex and refreshing.

Though it’s brewed in Maine, the recipe sticks to its Belgian roots. We’ve worked hard to make sure that the Allagash White in your hand tastes the same as it did back in 1995, when Rob Tod brewed the first batch.

Most breweries will include a Witbier in their portfolio, it is a classic style and a style that has been elevated to one of the standards largely because of Allagash White. Over the last 5 years or so, I’ve had close to 100 different Witbiers and few come close to the delicious elegance of the American progenitor of the style. So many people who write about beer, work in beer, and love beer have espoused the greatness and elegance of the beer. On a great list on FoodandWine.com, Allagash White was listed as the fourth most important American Craft Beer ever brewed. Numbers 3 to 1 on that list being Goose Island Bourbon County Brand Stout, Samuel Adams Boston Lager, and Sierra Nevada Pale Ale. Honestly, I’d be hard pressed to argue those slots except maybe I’d swap Bourbon County and Allagash White largely because White is a more approachable and far more readily available. Noted Beer writer Josh Noel gave the beer a great write up a few years back and even recently said on Twitter that Allagash White is the beer he’d hand somebody to introduce said person to Craft Beer.

According to this Vine Pair article from September 2017, about 80% of Allagash’s output is White and I doubt that number has shifted significantly in two years. It is the beer that pays the bills, the beer most associated with the brewery, it is the flagship beer. Allagash White is absolutely delicious. One could argue that Allagash White is more than just the brewery’s flagship, it is a flagship for American Craft Beer as a whole. Most bars around me in NJ have it available, either on draft or in bottles. EVERY beer shop carries it. Maybe for that reason, I sort of overlooked the beer for a little while. But earlier in the year, I was out at dinner and the selections on tap were very limited, a few macro beers and Allagash White and a Dogfish 60 Minute. Opting for a less hoppy beer, I went with White. It was a re-revelation. Sure I’d had the beer a few times over the years, but since I last had it and that instance, I’d had many different beers. Taking a long sip of the beer brought me back, made me realize how elegant the beer is.

Allagash has often set their own trends, they’ve helped the beer community to embrace Belgian inspired ales across that particular spectrum. However, Allagash succumbed to a trend themselves when they finally decided to put White into 16oz cans. To say it was a bit of news in the beer world and was met with excitement, is an understatement. Especially in their location (New England) which is where arguably the most popular style at the moment was born (Hazy IPAs, packaged in 16oz cans). 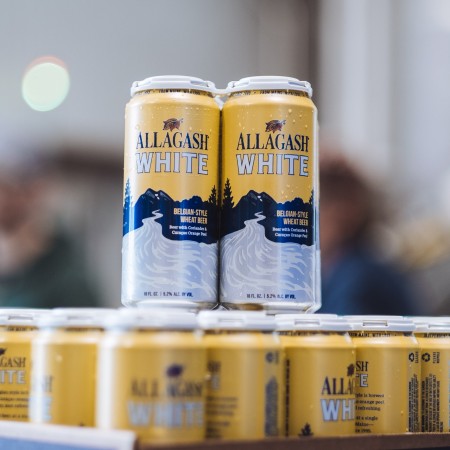 Although I mentioned this in my August post about breweries to visit, it is worth mentioning again. Rob Tod was recently awarded the prestigious James Beard Award, specifically, the 2019 Outstanding Wine, Spirits, or Beer Producer. He’s only the 4th beer person to receive the award. It all started with Allagash White and persistence.

Like Josh Noel, I don’t know that I can think of a singular beer to hand to a person as their introduction to complex, elegant possibilities of craft beer. 20+ years of an unchanged recipe and you’ve got a masterpiece that should absolutely not be overlooked because of how easy it is to find.

More than any of the other beers I’ve mentioned in these “American Craft Classics” posts (or on this blog as a whole), Allagash is objectively an inarguable definitive classic of American brewing.