A Farmhouse beer from the Garden State featuring an iconic fruit from the State makes for a fun, flavorful beer.

From Three 3’s page for their beers:

This classic light bodied Saison is flavored with mosaic hops and then conditioned on a truckload of local Hammonton Blueberries, creating a beautifully colored farmhouse ale! Bright colored, crisp, and juicy… With just a little bit of bite! The perfect summer beer!

Few fruits are as associated with New Jersey as the tasty and tart blueberry. After all, the blueberry is the State Fruit of New Jersey. As it so happens, Hammonton, New Jersey, home of Three 3’s brewing, is the “Blueberry Capital of the World,” so when I saw this beer available in stores around me, I figured what better beer to feature/review during New Jersey Craft Beer Week. The imagery on the label evokes the “Welcome to Hammonton” sign emblazoned with “Blueberry Capital of the World,” which is a really nice touch. 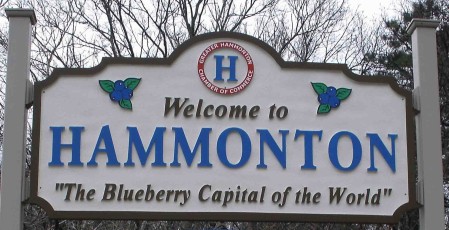 Three 3’s is one of a triumvirate of breweries in Hammonton and the brewery whose beers I’ve seen most often in my area so I was especially pleased to see something this interesting on the shelf. I like blueberries quite a bit, they are one of my favorite fruits.  Adding blueberries to a Saison would be a logical pairing. Given those ideas, does the theory prove out in the beer itself?

The beer pours a bluish-reddish-purplish, as you might expect. Think a slightly lighter and hazier version of what blueberry or cranberry blueberry juice would look like with carbonation and a head, of course. Aroma is blueberry with a bit of tanginess intermingled with the earthy flavors associated with Saisons. Nothing unexpected in what is wafting from the glass of beer through my nose into my palate.

First sip leads me to think the taste follows the nose. More sips proves that out to be true. On the front end of the beer, there is a large amount of blueberry. This is great because as I said, I like blueberries. I think the yeast and bready elements inherent in the beer evoke thoughts of blueberry pie in my palate memory. Because blueberries are a tangy and sweet fruit, the beer has nice amount of zing, too. Not sour like a gose, but the pleasant tartness natural to blueberries.

This saison leans a bit on the earthier side, with a bit of an aftertaste. That’s about my only issue with the beer, but that’s more of a personal preference on saisons that exhibit this kind of aftertaste. In that sense, my instinct tells me this is a well-made beer. Before posting this review, I wanted a second take on the beer. The first can, I enjoyed all by itself, with no food accompaniment. The following night, I had the beer with the usual pizza my wife and I get on Fridays and I was surprised that I enjoyed the beer even more. It seemed like more blueberry was present, or my palate was in a slightly different place a day later. Either way, Blueberry Saison from Three 3’s is a top notch saison that is made more flavorful with the local fruit shining as a smart additive.

This is a great beer to represent NJ and NJ’s claim as the Garden State that puts the Official State Fruit on full display. Saisons, with the moniker of Farmhouse Ale is a logical beer to be brewed in Garden State, throw in a fruit (Blueberry) that 100% exemplifies the region of the fruit and few beers may as deliciously shout New Jersey as much as Three 3’s Blueberry Saison. In short, a beer well-worth trying.

Recommended, link to Untappd post. I initially gave this beer 3.75 rating, which translates to a beer I’d want again and happily buy again. After the second can the following night, I’d give this one a 4-bottle cap rating.