Time for another slight change in protocol here at The Tap Takeover. With my first Monthly recap post for 2018, I’m going to trim back from writing about the majority (90%) of the beer I had in the previous month and go with six beers. Ideally, I’ll try to keep mention at least one beer that didn’t quite work for me. Also, this list of beers excludes any that have been featured as a single beer review. For this post, at least, I’ll go chronological from what I had early in the month to what I had most recently.

I’ve found myself drawn to more NJ breweries over the recent past, rather than nationally distributed brands, so two of the beers in this post are from NJ Breweries.

First up is the very first beer I had in 2018. Café Con Leche from Cigar City Brewing is a beer whose style is strongly in my wheelhouse, but the execution left a lot to be desired. Cigar City started distributing into NJ last year so I was looking forward to trying some of their beers. Especially their interpretation of a Milk Stout. While it wasn’t bad, and relatively true to style there was something unpleasant on the finish of the beer. An odd aftertaste made the beer, on the whole, not something I’d want to try again. This was one of the bombers I received for Christmas so I didn’t feel too guilty about not finishing the whole bottle. 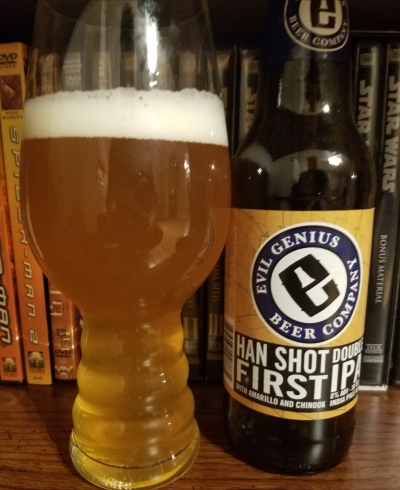 Next up is an IPA, or rather, Imperial/Double IPA from a fairly local brewery in Pennsylvania, Evil Genius Beer Company. I’ve had a few of their beers, the quality is good and the names are very clever, including this one, Han Shot First. This beer surprised me, it did not have nearly the level of hop bitterness I expected considering it is a Double. While the ABV is 8%, the IBU is 30, making this a very juicy, drinkable IPA. I’d definitely have this one again and not just for the name.

Collaboration No. 6 – Barrel-Aged Blend Other – 4.50 bottle Caps on untapped

The third beer in the January Six Pack is one of two beers I had at one of my favorite Mexican restaurants, Sol Mexican Cantina. Very good food combined with one of the best selections of beers in Somerset County, NJ are why I like this place so much. The first beer I had that night was Collaboration No. 6 – Barrel-Aged Blend, a collaboration between Boulevard Brewing Co. and Firestone Walker. I’ve only had a couple of Boulevard’s beers and liked them fine, I need to seek out more from them. This beer is listed on untappd as “Other” likely because it is a blend of four heavy styles, two from each brewery: Bourbon Barrel Quad (45%) & Imperial Stout X Tart Cherry (10%) from Boulevard and Stickee Monkee Belgian Quad (35%) & Velvet Merkin Oatmeal Stout (10%) from Firestone Walker. It probably will not come as a surprise that the Belgian Quad flavors come through the most, but the sweetness of the stouts is there, too. This quite simply an outstanding beer

It looks like this one was brewed in 2016 so I don’t know if it was a one-time beer or has been brewed again more recently. Either way, if you see this one, get it because it is a fine example of experimental, collaborative brewing.

Number four is the first of two beers from New Jersey and the other beer I had at Sol Mexican Cantina: a straightforward IPA from Brotherton Brewing. This is the first beer I’ve had from the South Jersey brewery and boy was I impressed. This is a borderline juice-bomb; a hazy Citra-hopped unfiltered IPA. I could drink this all day and hope I can find some of this in cans near me. Like I said, this is just simply a tasty, well-made IPA. Sometimes a well-made standard style is just the beer you need.

The second New Jersey beer was probably the best beer I had in January and one of the best porters I’ve ever had. One of our (my wife and I) favorite restaurants is the Stirling Hotel – amazing food, great beer, and excellent beer events like the one I attended in the middle of the month. Essentially a Tap Takeover, Stirling Hotel hosted a “Kane Brewing Brewer’s Lunch,” which featured six beers from Kane and a unique menu. My meal was fantastic, waffles topped with a roasted duck leg and fig syrup. One of beers I had was Kane’s Sunday Brunch, an Imperial Milk Porter made with coffee, maple syrup, and cinnamon. At 9.5% this is a potent beer, but so smooth and sweet. This is one of Kane’s once per year beers and seems to only be available at special events like this and in 750ml bottles at the brewery.

Some people may be wary of anything with cinnamon, but the spice is used perfectly in this beer and compliments the flavor profile rather than overpowering everything else that went into the beer. This is a must have beer, especially if you live in or near New Jersey.

Finishing off the six pack for January is one of the iconic American craft beers: Two Hearted Ale from the great Bell’s Brewery in Michigan. I have lamented in the past that Bell’s doesn’t (yet?!?!) distribute to NJ. I happened to see this one on draught at the Houston Airport. Considering I had some time to kill before my flight departed, I ordered a pour and was satisfied. I now know why this beer has the reputation it does, this is one of the best, most drinkable IPAs I’ve ever had. As I plead when I reviewed Bell’s other iconic beer, Oberon Ale, if folks from Bell’s are reading this, please get your beer into NJ. You’d make an entire state of craft beer consumers extremely happy.

There you have it – six beers, five of which were excellent and one that just didn’t work for me.