The yellow “Coaster” is from the River Horse 6K I ran with my wife in brother-in-law in April 2016. At the end of the race, everybody got a pint of Summer Blonde. Logo on the glass is the old-school, pre-2007 logo.

The beer’s description on River Horse’s Landing Page for the beer:

We start with a brown porter brewed with dark roasted malts, and add one pound of chocolate per barrel. We then throw in some Madagascar Vanilla beans to accentuate the chocolate flavors, resulting in a decadent porter. Available February – March.

As one of the oldest micro-breweries in the state, River Horse Brewing Company is a New Jersey Brewing institution. Originally started back in 1995/6 in Lambertville, NJ, new ownership took over in 2007, and they moved to a larger facility in 2013 in Ewing, NJ. Their mascot Brewtus (a stylized cartoon hippo) appears in various guises appropriate for each beer of the line-up (with cow markings for the Milk Stout, googly eyes for the Hippotizing IPA, etc).

Although I’ve mentioned their beers and the brewery in a few posts here at the Tap Takeover, I’ve had intentions of giving one of their beers a full review for a while. Initially determining which beer from their portfolio to highlight  first was a minor challenge since River Horse brews quite a few beers I like including the excellent Oatmeal Milk Stout and Tripel Horse, which was awarded a Bronze Medal at the 2017 Great American Beer Festival. In the end, I figured I’d highlight one of the special beers they consider a seasonal and available throughout their distribution footprint.

On to the delicious Chocolate Porter… 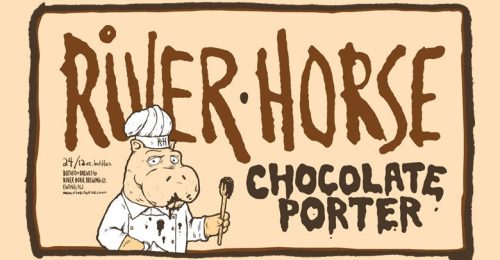 Popping open the cap, the beer pours into the glass a silky dark brown that smooths into black when the light hits it the right way. Poured properly, there’s a small light brown or tan head. Once fully poured into the glass the beer practically screams: Drink Me!

Some porters can have a powerful (or overpowering) smoky element, which is not the case for this beer. The “one pound of chocolate per barrel” sweetens the beer and eliminates some of that bitter smoke/roast flavor. If anything, the roast/smoke is akin to the edges of a freshly baked brownie, but the overall flavor, if we’re continuing with the brownie analogy, is like the gooey, slightly under-baked deliciousness at the center of the brownie.

The texture of the beer is really smooth with only minimal carbonation; just enough that it still feels like a beer.  For me, this is a beer that works better when it is colder rather than warming to room temperature like many darker beers.  At 6.5% ABV, it isn’t too heavy, so you don’t have to take your time with drinking it for those reasons, but the decadent, sumptuous flavor makes you want to take your time with the beer you just poured. Even if you have another four or five in the refrigerator from your six pack.

River Horse’s Chocolate Porter is most definitely a dessert beer, if that hasn’t become evident at this point. In other words, if you could take the best brownie you’ve ever had and transformed what makes it so good into beer form, chances are you’d have yourself a bottle of River Horse’s Chocolate Porter. First brewed and bottled in 2015 (I think), the beer has become a highlight of River Horse’s annual lineup in February, just in time for Valentine’s Day.

If I were to build a shelf of Essential NJ Beers, River Horse’s Chocolate Porter would definitely have a spot. From River Horse’s long history in the state to the pure wonderful taste of this beer, I’ve had this in my rotation of beers since I first had and enjoyed the beer. I know I raved about Kane’s Sunday Brunch Porter a couple of weeks ago and don’t get me wrong that is a fine, fantastic porter. However, the simple elegance of chocolate makes this beer stand on its own and make it a sought after beer in the region.

Back in 2016, River Horse bottled an Imperial version of this Porter, I hope they do again and I hope I get to sample it.