A well-made American stout that doesn’t rely on adjuncts for its tasty flavor profile.

From the Sunken Silo’s Our Beers page:

We honor Joe senior with a riff on his name. A whiff of coffee and chocolate with a silky-smooth mouthfeel. ON NITRO

Sunken Silo Brew Works has been open for about 2 years, I visited just before the pandemic and given how close they are to me, I figured it was about time I made another visit. They are also part of the Hunterdon Beer Trail, which might be a feature post later this week. As for this beer, they only had it on a nitro tap, which I often feel drowns out the flavor of the beer, but I was in the mood for a stout. So how did Wystouti work for me?

After a slightly slow pour, the beer placed in front of me looks very inviting. The creamy looking khaki head topping off the dark stout is a picture-perfect beer.

Diving in, I get the mouthfeel of the Nitro immediately. The fluffiness is pleasant. Then the taste follows, which is what I expect from a Stout, mostly. Roasted malts. But wait, there’s more!

I’m getting some other flavors, unexpected flavors, but good nonetheless. There’s the expected evocation of coffee and hints of chocolate from the roasted malts. But there’s a berry-like sweetness on the backend of the beer. More of a hint of berries, I’d say, a nice surprise and pleasant overall.

Maybe the thing I most appreciate about this beer is how straight-forward it is. It seems there are far more stouts with some kind of adjunct (chocolate, peanut butter, marshmallow, lactose, coffee, etc), so a stout that gains its flavor from the core four ingredients? Seems like a novel concept these days, but you can count me in. Especially if the beer is as well-made and tasty as Wystouti is.

Wystouti is a terrific stout, although ’d like to try the non-Nitro version. Sunken Silo let a batch sit in bourbon barrels for 9 months to celebrate their 2nd birthday. Next time I visit the brewery, I may have to grab a bottle of it. 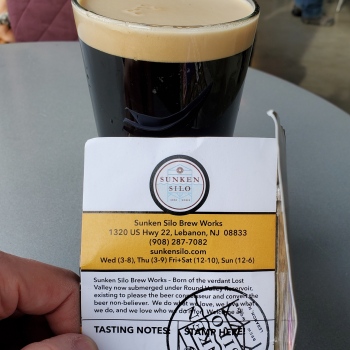