A big, boozy stout that is unique in the style, blending Belgian and American influences very admirably. 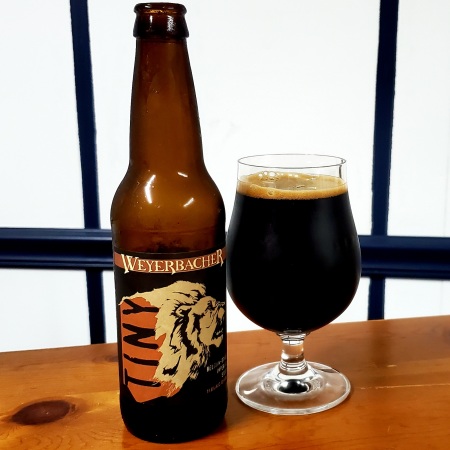 From the untapped page for the beer:

Tiny is a Belgian inspired Imperial Stout weighing in at 11.8% abv. You’ll find big chocolate and roasted notes, balanced with the Belgian flavors from the Abbey yeast strain. This beer is very smooth and lacks the astringency you sometimes find in these big Imperial Stouts.

It has been quite a while since I’ve had a beer from the landmark, independent Pennsylvania brewery. In the early 2000s, Weyerbacher was a consistent go-to for me, even beyond their iconic Imperial Pumpkin Ale. I’d been in the mood for a relatively straight-forward, new to me Imperial Stout, and TINY is one of the prominent, maybe almost-flagship beers from Weyerbacher.

Let’s get to the beer whose name is in cognitive dissonance with the liquid in the bottle/glass.

Expectedly, TINY pours black as night. There’s a thickness to the beer that hints at a substantial beer. The aroma is slightly different than the standard roasted malt, maybe a little sweeter? This beer being a “Belgian-inspired” stout, the yeast likely gives it that added layer of complexity.

My first taste is heavy on the roasted malt with a great deal of sweetness. Most of the beers I’ve had from Weyerbacher lean on the sweet side and this one is no different, and keeping that in mind, it is a good level of sweetness. It isn’t cloying, rather, it is pleasing. As with the aroma, the yeast brings something unique to the overall flavor profile. Can’t say what exactly that is, but there’s an element of fruitiness? Whatever it was, I liked it.

I had a second bottle a couple of nights later and the fruitiness I mentioned in the previous paragraph comes through slightly more on the initial taste of the beer. Again, I couldn’t quite pinpoint it, but I suspect the yeast evokes some hints of maybe banana? Maybe hints of raisin? I don’t know exactly what to call it other than something I like.

As I said, the name of the beer is definitely a misnomer, because the booziness of the 11.8% ABV is definitely evident. It isn’t off-putting, but rather it is a presence that lets you know the beer should be sipped, appreciated, and enjoyed in its full-flavored glory.

Early in the timeline of the Tap Takeover, I reviewed Allagash’s Black which is similar to this beer in some ways. Both beers are have their roots in Belgian-style beers whose flavors come primarily from the yeast utilized in the brewing process. However, with Weyerbacher’s TINY there’s more of an American influence with the malt, and overall stout profile. Comparison to Allagash Black aside, TINY is a relatively unique, imperial stout.

It has been a while since I’ve said this of a big beer, but TINY most definitely benefits from warming a bit to room temperature. The complex flavors expand and come alive even more.

As it so happens, TINY topped me out for the Heavyweight Badge on untappd, essentially the dark beer badge. What does that mean? Well, as the description below badge indicates, I’ve had 500 beers categorized as either porter or stout. 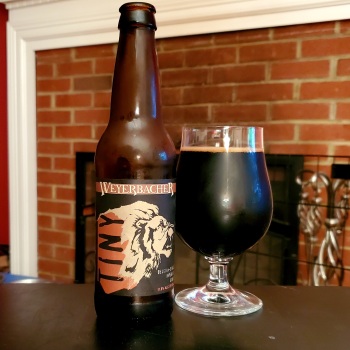