Quite simply, one of the better Craft Lagers I’ve had over the past couple of years.

You know those moments when you’re sitting on the beach under the hot sun and sweat is glistening off your forehead, so you start debating whether or not to cool off in the ocean, but then that JAWS music pops into your head…duunnn dunnn…duuuunnnn duun…duuunnnnnnnn dun dun dun dun dun…well don’t worry, ‘cause we’ve got you covered. Sit back, crack our cold, crisp Premium Lager, and watch everyone else swim carelessly as countless very sharp teeth swim beneath their feet. Amity Beer…now in 12oz cans, sold as a 6-pack. Drink responsibly and have a Happy Fourth! To learn more about the inspiration behind this beer, be sure to read the box…

It is turning into a theme of the Tap Takeover with my beer reviews of late – breweries who had the unfortunate timing to open/launch during the COVID-19 Pandemic. Alternate Ending fits that bill, but they are a tad different – they are a brewpub as well. Their overall resume, the people behind the brewery/brewpub is quite impressive. They have  beer/brewing experience at breweries like Other Half and Jughandle. Alternate Ending took over an old BowTie Cinemas location and as such, goes with movie-themed names for their beers. Since Aberdeen Township is considered a Jersey Shore town and one of the most popular “shore” movies all time being Jaws, why not make a beer as an homage? They did and called it Amity Beer, Alternate Ending’s (and head brewer Brendan Arnold) take on the Pale Lager.

As I noted in my review of Twin Lights Lager, essentially, a Pale Lager can be considered an “almost Pilsner.” Or another thought is All Pilsners are Pale Lagers but not all Pale Lagers are Pilsners. 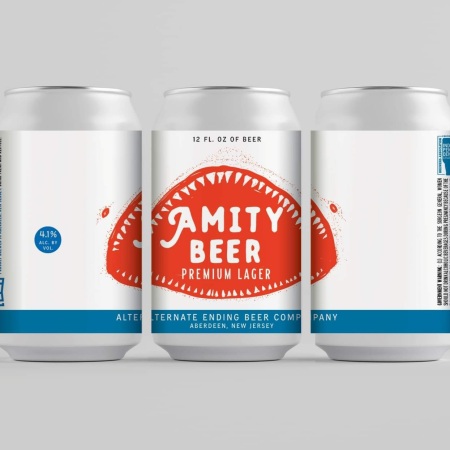 As for Amity Beer, I enjoyed the beer freshly poured into a dimple mug from the draft. This beer looks wonderful. Perfect foamy head, slightly translucent pale yellow liquid. In other words, you look up Lager in the dictionary, this beer is absolutely what you want to see.

A beer can look the part, as does Amity Beer, but it has to taste the part, too.

Malt/breadiness and maybe a little hint of sweet fruit waft from the mug. The first sip is a slap of deliciousness to my tastebuds. Those aforementioned aromas transfer even more potently to the taste in so many ways. There’s a bit of a cracker element, but what stands out most is the finish, there’s a slight sweet fruitiness I mentioned that compels me to keep drinking the beer. It is such a fun, delightful beer, I wish they had six packs of the beer, but it sold out very quickly when it was released at the end of June 2021.

Maybe the most impressive element of the beer is that it is only 4.1% ABV and it is bursting with flavor. It takes a well-honed brewer to coax that much flavor in a beer with that low of an ABV. In talking with head brewer Brendan during the NJCB Night at Alternate Ending on July 12, he mentioned that this was the most “difficult” beer he’s made at Alternate Ending. Even though the delicious Pilsner they brew, Royal Rug is a difficult style, there’s even less wiggle room for mistakes or opportunities to hide those mistakes with, say, the potential hops you’d add to a pilsner. Well…to say that Brandon absolutely nailed the style is an understatement.

To play on one of the most famous lines of dialogue from the movie to which this beer honors, “They’re going to need a bigger boat.” In other words, a beer this good, this flavorful, and this fun, should be on tap from Memorial Day to Labor Day, at the least.