“A flavorful, every-day, easy drinking lager. What’s not to like?” 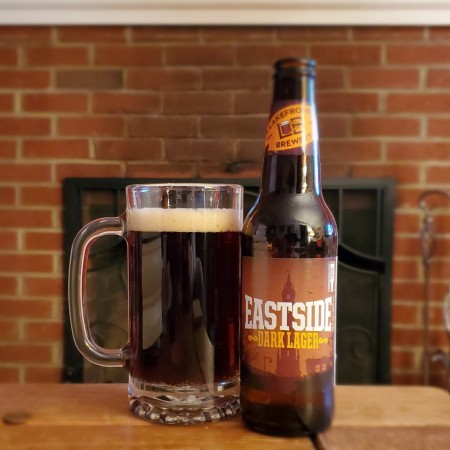 From Lakefront Brewery’s landing page for the beer:

Honoring the eclectic East Side of the city, this Bavarian dark lager is a blend of three specialty grains, creating a rich, smooth, dark beer that anyone can enjoy. Our most award-wining beer of all time!

Pours a clear, dark color with an off-white head. Hints of roasted malts find their way into the aroma, and form a pleasant background to the dark, rich flavor. The German lager yeast rounds out this brew with a smooth, complex finish. Winner of the 2014 and 2016 European Beer Star Gold Medal for Bohemian-Style Schwarzbier.

What is the most common image conjured for the word “lager?” I would guess in America, that image would be fizzy, yellow liquid. While understandable, that idea undermines the fact that long before Pilsners came to dominate the world, dark lagers were far more prevalent. In their Eastside Lager, legacy Wisconsin Craft brewer Lakefront Brewery looks to evoke that classic, old-world style. This beer would seem to land somewhere between a Schwarzbier and a Munich Dunkel, both of which are styles I like. How does the final result match up?

The beer pours a translucent brown, looking more the part of a Munich Dunkel than a Schwarzbier. Aroma doesn’t stand out too much, it smells like a bready lager.

There’s a very pleasant malt element in this beer that gives me bready hints. The malt gives a very balanced sweetness, it is far from cloying, but is definitely present. I don’t know if it is the color of the beer that has me down this path, but pumpernickel bread comes to mind as what the bready malts evoke in my palate.

While this beer does indeed remind me of a Munich Dunkel, I’m also finding similarities to an English Brown Ale. If you put this beer next to an English Brown, it might not be easy to correctly pinpoint the style of the beers from a visual standpoint. Some of the flavor elements are similar, but the lager yeast in this beer would be where the differences would be noticeable. This is not to knock Eastside Lager but what I’m saying, more or less, is if you enjoy English Brown Ales, you’d likely enjoy this beer.

One of the important characteristics of a beer is how it finishes in one’s palate. For me, Eastside Dark has a strong finish – the pleasant flavor makes me want more. The sweetness and refreshing elements often associated with lagers is on point here, I want to enjoy more of the beer..

Eastside Dark is a flavorful, easy drinking lager that would work well alongside any meal or anytime you’re in the mood for a no-nonsense tasty beer.

Untapped badges earned with this beer (one of the cooler looking badges, in my opinion): 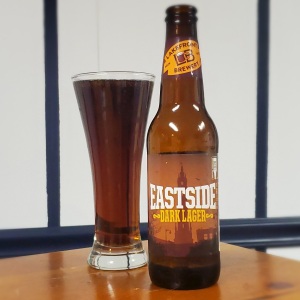