A new Lager from a brewery known primarily for Ales is a welcome addition to their portfolio. 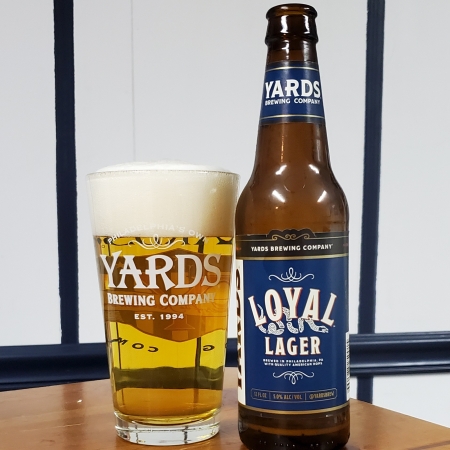 25 years after opening our first garage brewery in Manayunk, we’ve built our dream brewery in the heart of the city – all thanks to our fans who have been loyal since the beginning. As a sign of our gratitude, we’ve used our new world-class brewing system to create Loyal Lager: a crisp, easy-drinking American Craft Lager brewed with two-row malt and aromatic Loral hops. It’s what a clean, high-quality lager is meant to be.

When a brewery as renowned as Yards is and has been brewing beer for as long as Yards has been brewing beer introduces a new year-round beer to its core line-up, it is noteworthy. Especially when that beer is a Lager, considering that Yards is primarily a brewer of Ales. Yards has been “brewing Philly’s beer since 1994” and you’ll see much of their advertising/marketing indicating they are “Philadelphia’s Brewery,” which considering they are the largest operating brewery in Philadelphia is a fair statement. All that makes “Philly’s Hometown Lager” a logical slogan for this beer.

Since the beer launched in September 2019, I’ve been intending to give it a try, and finally did so when I saw some positive chatter about the beer in the forums of Beer Advocate from some fellow Lager “enthusiasts” and my refrigerator was empty of any kind of Lager. It is always a good idea to keep at least one of each style in the fridge if you ask me and since you’re here, you’re asking me. 😊

So what is my experience with the beer? The beer pours a clear golden yellow as one would expect a straight-forward lager to pour. Nothing super noticeable on the aroma, maybe a little bit of breadiness…the old adage of a “beer that smells like beer” comes to mind.

First taste is very good, it hits the notes I expect a well-crafted lager to hit. That breadiness from the aroma is more pronounced in a very pleasant way. Hops aren’t very bitter, but they are present. The flavor profile doesn’t change too much from sip to sip, but that consistency in a straight-forward “American Lager” is on-point for the style. It tastes like beer on your fist sip and your last sip. To counter what I say about the bigger ABV beers, I wouldn’t want to let this one warm to room temperature. Drink it cold and enjoy it any time. For me, I’ve found a new “Friday Pizza beer” to add to regular rotation.

Loyal Lager is a very tasty lager that should do well for Yards especially as a significant segment of craft beer drinkers are turning to lagers and lower-ABV beers. As a traditional style, it fits in quite nicely in their core alongside Philadelphia Pale Ale and Brawler. This beer has enough flavor to satisfy people looking for a new lager and will welcome people who are curious about independent craft beer. It will especially be welcoming to people with the type of trepidation who associate “craft beer” only with “IPA” or beers that are “too hoppy.”  I go to at least one Philadelphia Phillies game every year, so I expect this will be one of the offerings once opening day starts. Seems a perfect place to enjoy this tasty beer.

For a quick, fun aside, Tom Kehoe, founder and president of Yards, “took Loyal Lager on a tour of the Yards facility” when it first launched, as documented on twitter. 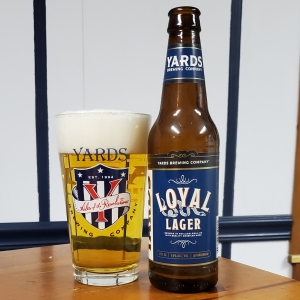