“Not just an impressive Pilsner out the gate for a new brewery, but a damned good Pilsner all around.” 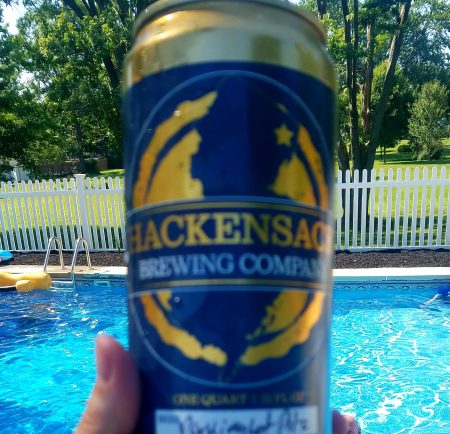 From the untappd description of the beer::

An ode to the tailgating culture we grew up with in North Jersey/NYC. Parking Lot Pilz, a super well-balanced lager made to suit all your pre-gaming needs. Pairs well with burgers, chicken, shopping cart pretzels, and nosebleed seats.

When you host a fourth of July party every year, and most of your guests know you like good beer, you tend to get plenty of beer. My uncle, who knows how much I like Pilsners, brought a crowler of this beer (among others) to the party. It was early in the day and for me, a Pilsner is always a good start so I didn’t waste too much time before I decided to pop open the crowler and share it with some of my guests (including my dad and father-in-law).

For all the beer I’ve mentioned here and had over the years, this was the first beer I had from a crowler. Pouring the beer, I didn’t get too much of an aroma that made the beer stand out. Since we were all drinking from Red Solo Cups, it wasn’t exactly easy appreciate the color of the beer in its full glory, but yeah, it was yellow and looked how you’d expect a pilsner to look. The picture below snagged from Hackensack Brewing’s Facebook page shows the beer in its glory. Looks are only a small part of the game. We all know the flavor and taste is the main thing.

Ohhh yeah…this is a very tasty pilsner. Parking Lot Pilz leans more on the Czech side of the pilsner style so there isn’t as much hoppiness to the beer. A little softer than the German style pilsners, but there’s still a nice crispiness that is the hallmark of a good pilsner. The low IBU (20) proves out the milder hop presence (I only checked the IBU as I was writing this review). The lower hop presence is by no means a value judgment…I like the beer for what it is, and how it measures up to the specific style and not for what it isn’t. In other words, stylistically, Parking Lot Pilz is on point

Because there were many people (35+) at the party, a few people had some of the pilsner from the Crowler. My dad liked it quite a bit, and he leans more towards IPAs. My father-in-law, who leans more towards the lager side of the beer spectrum, was really impressed with Parking Lot Pilz, too. My brother-in-law was impressed with the beer, too. But no sooner did I finish my full pour did the crowler come up empty. Not a bad sign for the quality of the beer.

I like when my Pilsners and Lagers (especially the Helles Lagers) have that toasty, crackery finish and Parking Lot Pilz has that. There’s a really nice malt bill in the beer that gives the beer a flavorful body. I visited the brewery this past weekend and I wanted to make sure I tried the Pilsner fresh and boy is it even better fresh from the brewery. No surprise there, really. Again, not a knock on the quality of the beer out of the crowler, because it was damned good at my house.

All told, this a an extremely flavorful Pilsner. A beer any brewery would be proud to produce at any point in that brewery’s “lifespan.” Given that Hackensack Brewing only opened up January/February 2019 and they first made this available to the public in April, I’m even more impressed with the quality of the beer. I’ve yammered on about the skill and precision required to make lagers, especially pilsners, so brewmaster Mike Jones deserves big kudos for coming out strong with such a great lager game and a beer this flavorful that proves how good a Pilsner can be.

Recommended, link to Untappd 4.25-bottle cap (fresh at the brewery) / 4-bottle caps From the Crowler after an 1-hour car ride rating. 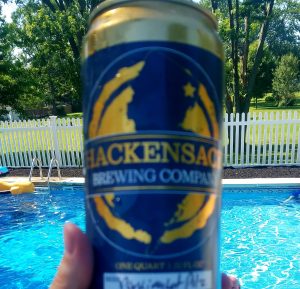