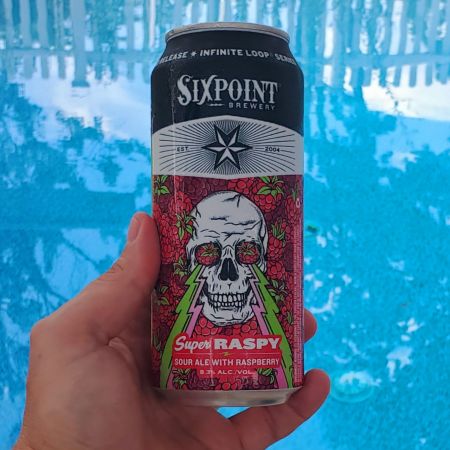 From Sixpoint Brewing’s landing page for the beer:

A lush, juicy burst of tart raspberry blitzes the tastebuds –like an ELECTRIC BLAST OF BERRY FLAVOR and aroma! In Super Raspy, loads of raspberries and a touch of milk sugar have their powers combined for a mouthwatering, super tasty brew.

Sixpoint is one of the great, historical northeast craft breweries. They were one of the foundational Brooklyn craft breweries. Founded 2004, they’ve been crafting hop aggressive beers which were immediately recognizable for their thinner cans. In other words, the potent hop nature, strong branding, and unique cans helped the brewery to stand out from other beers on the shelves. Fast forward to 2018 and Sixpoint was acquired by Artisanal Brewing Ventures, the family office-backed holding company formed in early 2016 via the merger of Victory Brewing and Southern Tier. Sixpoint has mostly stuck to their core beers from what I’ve seen, but the last year or two more experimental, or rather beers outside their core brews, seemed to emerge. Super Raspy is one of those beers,

Outisde of their Core beers, Sixpoint has been brewing and distributing beers in what they call the “Infinite Loop” series, which is where this beer sits in their portfolio, which is where this beer sits in Sixpoint’s line-up. What we have here is a beer that amounts to an imperial Gose. What makes it imperial? The ABV at 8.3%, whereas a Gose will typically be floating under 5%. Like many modern Goses, or interpretation of the Gose style, Sixpoint made this beer with fruit, specifically Raspberry.

There’s a tangy funky aroma to the beer, which I’ve come to expect from the Gose style. Raspberry is the most potent element of this beer on the first sip, including the tartness associated with the fruit. The funk that typically crosses my palate in a Gose is present in Super Raspy.

Where this differs from many other Goses I’ve had, especially the more traditional take on the style, is the addition of lactose, or milk sugar, which seems to be one of the most popular adjuncts in brewing. Thankfully, lagers are about the only style where I haven’t seen Lactose added. As for Super Raspy, the “touch of” lactose is a nice sweet counterbalance to the tartness of the Gose style as well as the tartness of the raspberries.

As the picture might suggest, I enjoyed this beer on a hot day next to my pool which was an ideal way to enjoy this refreshing ale.