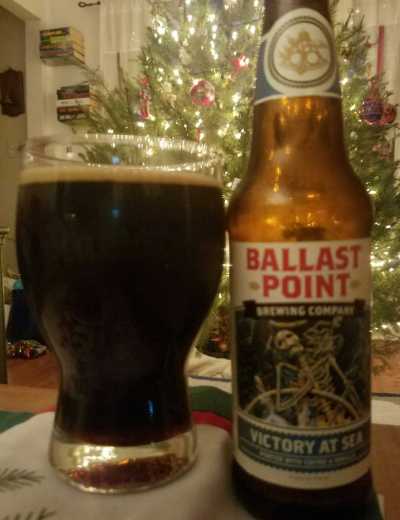 A big porter crafted to weather any storm.

Our Ballast Point Victory at Sea Imperial Porter is a bold, smooth brew with just the right amount of sweetness. We infused this robust porter with vanilla and San Diego’s own Caffe Calabria coffee beans. The subtle roasted notes and minimal acidity of the cold brewed coffee, balances perfectly with the sweet caramel undertones of the malt, creating a winning combination for your palate.

Ballast Point is one of the largest craft brewers in California, although no longer “independent” since the brewery was acquired by Constellation Brands (who also own Modela Negro, Corona, Funky Buddha in beer and Modavi wine and Svedka Vodka, among others) in 2015. Regardless of that, Ballast Point has been crafting popular and acclaimed beers since 1996. I’ve had a handful of their brews and liked about half of what I’ve had (especially their California Kölsch and Piper Down Scotch Ale) but of everything Ballast Point brews, this beer appeals to me the most.

Porters are one of my favorite styles and I’d wanted to give this well-regarded interpretation of the style a try for a while. I has a little hesitant to commit to full six pack at the price point, but fortunately, my favorite bottle shop (Gary’s in Hillsborough, NJ) sells some single bottles which is how I procured this one. Like most porters, this one pours a deep black and tops off with a slightly tan head. As a dark beer lover, it looks appealing and the aromas of coffee and vanilla are really inviting. The first taste gives off strong vanilla and coffee flavors with ample sweetness. The beer is relatively full bodied and definitely full of flavor. The flavor that lingers the most; however, is the vanilla. Even more than the coffee.

I’ve come to realize that vanilla, for all the suggestions and metaphors for vanilla being plain and boring, is a tough flavor component to pull off successfully. Especially in beer. I’ve had quite a few vanilla porters and stouts and more than one has given a really strong unpleasant aftertaste with few exhibiting a perfectly balanced vanilla component of the beer. Here with Victory at Sea, for my tastebuds, it is a nearly perfect execution of the vanilla. There’s only a slight lingering aftertaste from the vanilla, but the pleasant taste up front far outweighs the lingering at the end and kept my rating at a 4-bottle-cap review for untappd.

The ABV of 10% in this one isn’t too pronounced in the flavor profile. Then again, I took my time drinking the beer as a “dessert” so the alcohol didn’t affect me too much. However, that relatively high ABV should be taken into consideration if you’re having more than one or two of these dark, delicious beers.

At one point in Ballast Point’s brewing history, this beer was available only as a 22oz bomb and on draft, but a year or two ago, the beer became available in 6 packs.. It has since become an extremely popular seasonal favorite and I can see why. There are a few variants, including a barrel aged variant to help celebrate Victory at Sea Day making this an “Event Beer” for Ballast Point and folks who enjoy the beer around the country

Untapped badges earned with this beer