As readers of this blog know, July is a big beer month thanks to the annual family party on the Fourth of July. That will often bring even more new beers to me and July 2022 was no different. I also happened to visit a few different breweries in NJ this past month, and one in Massachusetts as I documented a couple of weeks ago. Just one non-NJ beer this month, but it was a milestone beer for me, at least on untappd. No IPAs this time around, just one lager, but a fruitful assortment of beers, if you well.

Let’s have at it, shall we?

I was in the area of Twin Elephant so I made a long overdue stop at the brewery in Chatham. I wasn’t sure what I wanted because the taplist had quite a few appealing beers. I settled on this hefty (7.2%) Saison which was very earthy with a nice fruity balance. Although the Herd is more known for hop-bombs and stouts, this beer shows their skill at the art of the Saison quite well.

This is the first beer from Hidden Sands I’ve had the pleasure of enjoying and it was a dandy. Cranberries are a great fruit to add into beer, particularly a wheat beer. There’s a really nice balance to the tartness of the fruit from the “heaps of NJ honey” added to the beer. I could drink this beer all day in the summer.

I sometimes overlook Cape May because they are so large and their beers are ubiquitous throughout the State of New Jersey, but then bam! They brew a beer like Bay Daze to raise the bar for a sour ale. This isn’t the sourest of beers I’ve ever had, but it might be one of the more refreshing sour ales I’ve had. The classic pairing of cherry and lime is perfectly balanced and the sea salt just brings everything together. On top of that, the can art has a puppers on it.

I knew I was coming up on 2500 unique check-ins to untappd for a while and wanted to have a special beer for it, but didn’t know what it would be. When a co-worker gifted this to me, I knew and this is certainly a very interesting beer. The yeast of a Belgian ale is often the signature element and it plays some interesting notes with the barrel character. As it warms, the vanilla, oak, and bourbon elements emerge more potently.

Very shocking to see an Icarus beer here, I know. I did visit the brewery for their Canniversary in the middle of the month, so I had a few to choose from in July and went with this small batch Sour ale. Icarus does the Berliner Weisse style very well and this might be the best one I’ve had. I wonder if it will be a new “series” of the style. Either way, the blueberry is the star here, while the lemon is really nice on the finish. It was quite warm during the event at the brewery and this beer was a perfect cure for that heat.

My dog Dusty is part Great Dane, so how do I not get a beer called “Great Dane” from my most local of local breweries? Fortunately, the beer was really tasty. Dortmunder Lagers are usually a little sweeter than say, a Helles Lager or Pilsner, but in the same family. Readington’s take on the style was very clean, dialed-in, and hit the spot. It is really nice to see this brewery making beer that continues to get better each time I visit.

All great beers and I could have made an additional 4-pack of new-to-me beers that were just about as equally excellent. 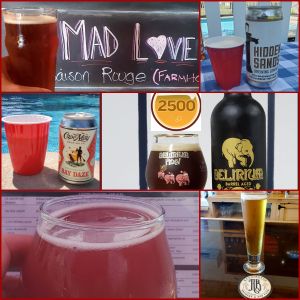