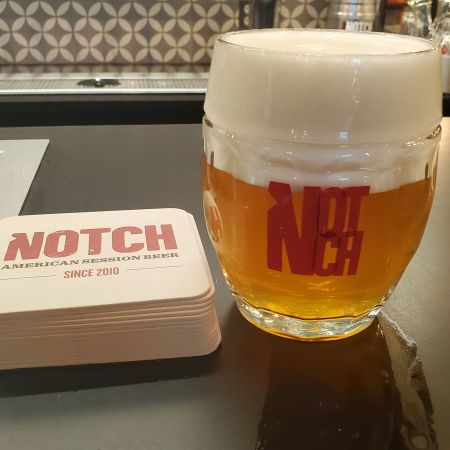 Why Desítka (or “Tenner”)? It is the density of the beer previous to fermentation (10 degrees Plato), and that yields a 4% ABV beer. Too much info, I know. But it is session beer. A SESSION PILSNER. They really do exist, in spite of what the beer expert tells you.

Also, this humble beer challenges notions that a lower ABV lager is simple in character or easy to produce. It is quite the opposite. A triple decoction of Czech floor malted barley takes 11 hours in the brewhouse, and a long cold fermentation and lagering time takes another 7 weeks (while it also naturally carbonates). This yields a delicate beer with a depth of character that begs you for one more, but it never fatigues the palate and always excites it.

Notch Brewing is widely regarded as one of the best brewers of Czech and German Lagers in the country. In fact, Notch Brewing was just awarded Best Brewery Award (2022) by Boston Magazine. When I had a little bit of time after a long conference and day from NJ to Boston, I thought to myself, “Hey, why not visit Notch?” So I did.

Strolling into the bierhall, I had some tough choices to make because I wanted to try just about every beer on their taplist. I settled on this beer, Tenner as my first beer. I later had Tmavy (Czech Dark Lager) and Notch’s Altbier, both of which were superb. But this review post is about Tenner.

The pour….is perfection in a mug. Look at that picture above, just a beautiful beer with a thick head atop a bright yellow-gold beer. Tenner was poured just as you’d expect in Plzeň (Pilsen to us Americans) in the Czech Republic, the country that consumes the most beer per capita and where Pilsner was born. Tenner more than looks the part

The aroma is inviting, but honestly, it smells like beer. Perhaps the most fresh and vibrant beer that passed under my nose…as if every other Pilsner or Pale Lager seeks to evoke this aroma.

First sip is pure heaven. I get a little bit of foam in that first sip, but the beer itself is everything I could hope to have in a Pilsner beer. The beer is quite soft and pillowy, pure delight. The malts of the beer are evoking sweet bread and sweet grains. There’s a slight fruity sweetness from the malt, too, which is very welcome. Many Pilsners have a sweet element, but here in Tenner that sweetness is perfectly dialed in and balances with the slight bitterness from the hops. The finish on this beer is maybe the best finish of any lager I’ve ever had. 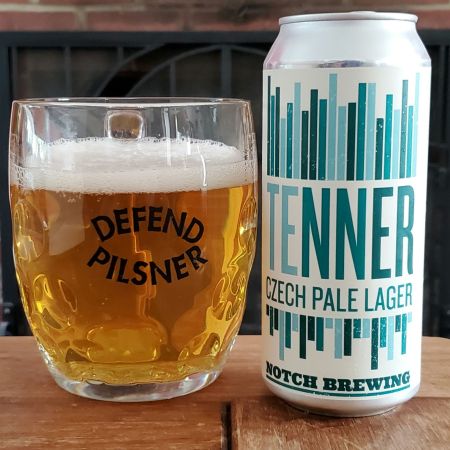 I decided to bring a four pack of Tenner home with me. There was no real noticeable difference in quality between the beer poured on draft and the beer out of my can into my Defend Pilsner mug. Well, the feel of the beer might have been slightly different because of the Czech faucet Notch employs at the brewery for their pours, but the flavor and taste – are of the same exemplary quality.

While this beer style is considered a Pilsner by many, the Czechs call it simply a “Pale Lager.” Frankly, whatever the label, the quality is delicious perfection. As of this post, I’ve had a meager 128 different pilsners since joining untappd in 2014. Not as many as some, but quite a lot more Pilsners than the most of my friends in my “beer circles.” In other words, I’ve had my fair share of Pilsners and feel comfortable to judge the quality of the style. Which all leads to my final statement on Tenner: without hesitation, I can say this is the best Pilsner (or Pale Lager as our friends in the Czech Republic and Notch might say), I’ve ever had the pleasure of drinking.

Recommended, link to 5 bottle cap untappd rating check in. | Can at home.