Sierra Nevada is celebrating their 40th year this year, so I figured I’d put together a shelf of honor six pack as a tribute, in addition to reviewing Barrel-Aged Narwhal earlier this week, which happened to be my 50th unique Sierra Nevada beer checked into untappd. In some respects, it is easy to take Sierra Nevada for granted in the beer landscape and to an extent, it could be easy to underestimate just how critical Ken Grossman’s brainchild is to beer in America and everything that means. Sierra Nevada’s Pale Ale is iconic and ubiquitous, but it shouldn’t be overlooked either. If Jim Koch and Samuel Adams/Boston Beer are responsible for giving beer drinkers in the 1980s beer they were accustomed to drinking but much more flavorful (lagers), Ken Grossman and Sierra Nevada went in an opposite direction with their hop forward approach. Granted, their Stout was their first beer, but it is Pale Ale that woke up the American Beer palate in the 1980s. 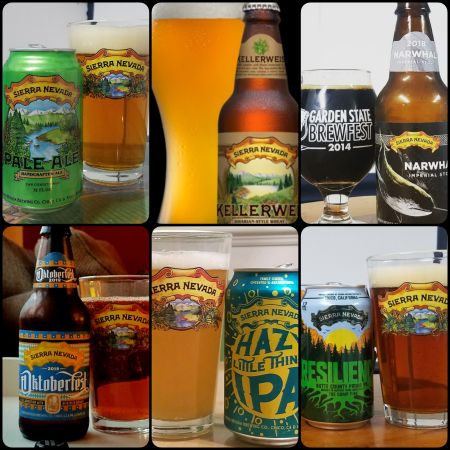 Sierra Nevada has long been the flag-bearer for what it means to be a Craft Brewery and over the years, they’ve been leaders in nearly every way possible: styles, technology, innovation, and community. I’d argue that Sierra Nevada doesn’t just exemplify what a Craft Brewery should be, but what an American company should be. I could go on more about the history of the brewery (hell, Ken Grossman wrote a whole book about it and their website has a good primer on the About Us section), so I’ll utilize my Six Pack format to highlight a combination of my favorite beers and their most important beers. A couple of these will be no brainers, obviously.

I’ll get this one out of the way first since it is the most obvious, considering many beer people consider this to be the most important beer in American Beer, period. The hop-forward nature of the beer, when it first came into prominence, was unlike anything many beer drinkers knew at the time. By comparison to today’s hop bombs with IBUs in the 70 to 100 IBU range, SNPA is relatively tame. My dad has been stocking his fridge with this beer for at least 20 years, so it was always in my beer orbit. I didn’t like the beer initially because it took me a while to like, enjoy, and appreciate hop-forward beers. But now? Now I enjoy the beer, seek it out and it is a great go to because it is so widespread in bars, and always a reliable beer to order.

Heavy on hops, that was always the brewery plan. So in 1980, we loaded Pale Ale up with Cascade—a new hop at the time named after the mountain range—and the intense aromas of pine and citrus sparked the American craft beer revolution.

After prohibition, American beer declined for decades. The brewery count shrank from thousands to less than 100 by the late 1970s. The beers you could find were dull, so a few thirsty rebels out West took up their own experiments in fermentation. Among them, our founder Ken Grossman used a new US-grown hop, Cascade, to help transform stateside flavor. Today, there are more than 6,000 American breweries making the most adventurous beers in the world. 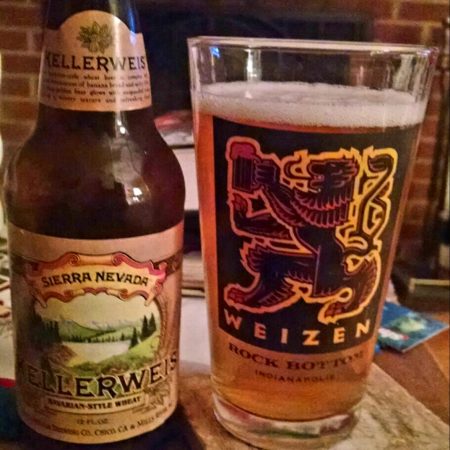 From the last time I could get this beer in NJ – 2015! Please send more to NJ Sierra Nevada!

I love a good hefeweizen, especially in the summer, but the classic style really works year round. As much as I extolled the virtues of Ramstein’s Blonde Hefe-Weizen here on the Tap Takeover, in my humble opinion, Sierra Nevada’s take is the best American interpretation of the style. The style is characterized primarily by what flavors are evoked from the yeast – some Hefeweizens will evoke a more clove-prominent flavor, while others will evoke a more banana-like flavor. Kellerweis strikes a great balance. In recent years; sadly, I haven’t seen this beer on the shelves in NJ quite as much as I did maybe four or five years ago. Regardless, it is one of Sierra Nevada’s core beers and a world-class beer.

Inspired by traditional Bavarian techniques, Kellerweis is a true artisan experience. With Kellerweis, we brew in open fermentation tanks—a process rarely seen today—to let the ingredients truly shine. The result is a hazy wheat ale—untamed, raw and alive. With a full, fruity aroma and notes of spicy clove and banana bread, Kellerweis is a truly unique brew.

Hazy Little Thing may be the biggest indicator of Sierra Nevada’s ability to smartly navigate the ever-changing beer landscape while delivering a great product. The Hazy IPA is most closely associated with New England, not a surprise given that many, many people call the style New England IPA, but Sierra Nevada is obviously a West Coast brewery. This is a great West Coast interpretation of an East Coast style. The beer literally changed Sierra Nevada’s fortunes, not that they were in dire straits, but Hazy Little Thing is the equivalent of a Summer Blockbuster, or even franchise. When the beer first launched in 2018, you could say it was successful.

I likened Hazy Little Thing to a Summer Blockbuster, but that’s even an understatement, to be fair. The beer is year-round and is more like a tentpole to a franchise. Consider that two other “Hazy” beers in the family have been released by Sierra Nevada over the last six months or so Fantastic Haze Imperial IPA (basically an Imperial version of Hazy Little Thing) and Wild Little Thing, which takes the Little Thing brand to a sour/tart/fruity notion appealing to the folks who enjoy or are curious about Sour/Wild beers. You might say Sierra Nevada’s “Little Thing” brand is quite the opposite of that moniker.

Some beers need a little polishing before entering the world, while others—the hop-heavy, rowdy crowd-pleasers—should just be left alone. We package Hazy Little Thing in all its raw glory: unfiltered, unprocessed, straight from the tanks and into the can. It’s a swirling cloud that likes to shake things up, a fruit-forward hop adventure for the daring. Go bold and make tonight a hazy one. 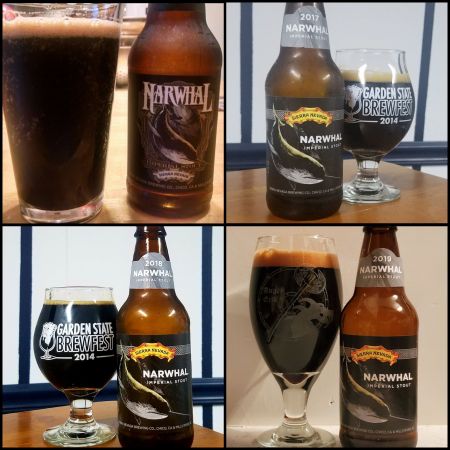 Narwhal Imperial Stout is one of my favorite beers, period. Sierra Nevada first brewed / bottled / distributed this beer in 2012 and I’ve had at least one bottle of it almost every year since (except I think 2015 and 2016). What makes this beer so great is that it is basically a core four beer – water, malt, yeast, and hops. All the flavor in this beer comes from those ingredients and it is extremely potent with an ABV of 10.2%. When I enjoy the beer, I usually get bittersweet chocolate from the malt and some aggressive hops on the finish.

In 2017, in large re-branding of several beers, Narwhal’s label changed. The iconic sea creature is still on the label/branding, but the fancy and classy font was replaced by bland block lettering. Thankfully the beer hasn’t changed.

Also in 2017, Narwhal (and their Bigfoot Barleywine) moved from 4-packs to 6-packs. That makes it much easier to allow one of those bottles to age and not consume them all in a relatively short period. Aging the beer really does improve an already great beer, the aggressiveness from the hops are mellowed (but still present). I think the oldest one I had was a bottle my dad aged for 3 years.

Narwhal Imperial Stout is inspired by the mysterious creature that thrives in the deepest fathoms of the frigid Arctic Ocean. Rich with notes of espresso, baker’s cocoa, roasted grain and a light hint of smoke, Narwhal brims with malt complexity. Aggressive but refined with a velvety smooth body and decadent finish, Narwhal will age in the bottle for years to come. 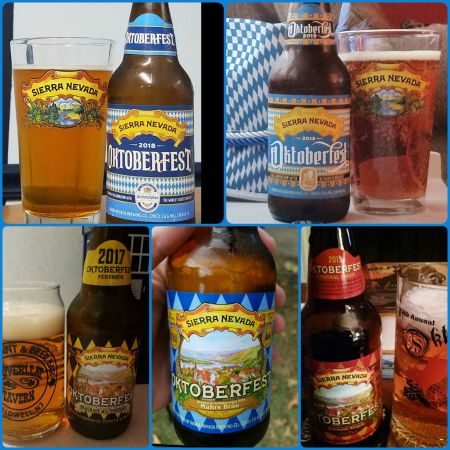 All the Sierra Nevada Oktoberfest collaborations!

This entry is a little unique since this single entry represents five unique beers. Almost every brewery makes some kind of traditional German-style beer to celebrate the fall/Oktoberfest season. Sierra Nevada did for years, but in 2015, they started something really special, fun, and interesting. They began collaborating with German breweries (a different one every year) on the traditional malty lager. I’ve had at least a six pack every year and they’ve all been very good. From 2015 through 2019, the following breweries collaborated with Sierra Nevada: Brauhaus Riegle, Mahrs Bräu, Brauhaus Miltenberger, Weihenstephan , and Bitburger Braugruppe. I’ve enjoyed them all a great deal, reviewed the Weihenstephan collaboration in 2018 and think the 2019 version with Bitburger to be the best. As a result of the last two collaborations, Sierra Nevada did secondary collabortions with both breweries, a delicious Hefeweizen with Weihenstephan (Braupakt) and a Triple Hop’d Lager with Bitburger.

Every Oktoberfest season I try to mix up what I get, but since 2015, whatever collaboration Sierra Nevada brews is a definite stand-by in my refrigerator from mid-September to mid-October.

It’s the ultimate season of revelry, so we teamed up with Germany’s Bitburger Brewery for an Oktoberfest that turns backyards into beer gardens. Rally your friends and celebrate with a festbier whose rich amber color and smooth malty flavor bring the Munich tents to you. We brewed Oktoberfest with Bitburger’s custom yeast and secret hop blend called Siegelhopfen, meaning “Sealed Hops”—two house ingredients never shared outside their walls until now. 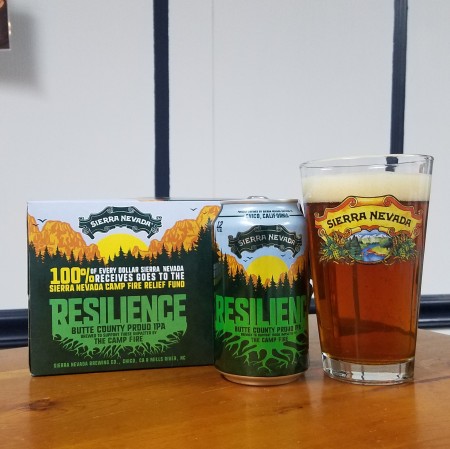 This beer exemplifies the spirit of community and giving back that has long-been a cornerstone of Sierra Nevada’s ethos and why they are such a beloved brewery. In a show of solidarity across the country, many other breweries brewed a Resilience IPA based on the recipe Sierra Nevada shared, and all the proceeds went to the Camp Fire Relief Fund. In 2020, as a result of the Australian Bushfires, breweries once again took up the charge to do their part and brew a beer whose proceeds would go to Bushfire relief, the Australian version is a Pale Ale.

When I had the Butte County version in early 2019, I had this to say: Sierra Nevada is really the standard bearer for the full definition of what it means to be an American Craft Brewery. They make superb beers and are a fixture in their community. Those two ideals come together perfectly in this beer, 100% proceeds of which go to the Camp Fire Relief Fund for the disastrous Camp Fires in California late last year. It doesn’t hurt that this is a delicious IPA, an IPA the embodies everything a modern West Coast IPA should be. I can see myself grabbing multiple six packs of this beer.

Butte County roots run deep. Forested hills, winding rivers, towering pines, mighty oaks, and even mightier people—it’s our home. And in the aftermath of the Camp Fire, the most destructive wildfire in California history, we will rebuild. More than 1,400 craft breweries joined us in brewing Resilience IPA, a fundraiser beer with 100% of sales going to Camp Fire relief. The overwhelming support helped inspire the Butte Strong Fund, a partnership devoted to the long recovery ahead.

There are, of course, many other Sierra Nevada beers that could qualify in something like an Ultimate Six Pack. I didn’t even touch on the Beer Camp event and lines of beer in this post though I did review the last version of the mixed twelve pack in 2017.  Psst, Sierra Nevada…any chance of something like that variety pack returning?