A flavorful take on the classic German Style. Every brewery should have a Kölsch like this in their lineup 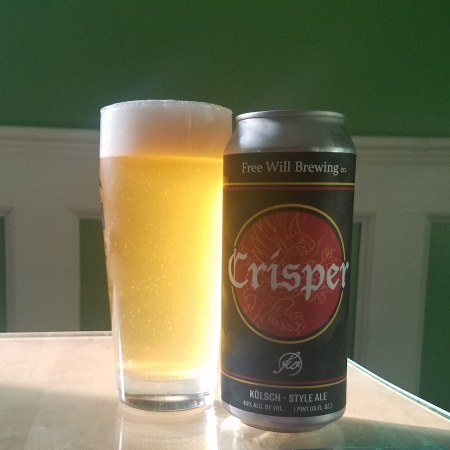 A bright, clean beer looks even brighter with the sun shining on it.

From Free Will Brewing’s page for the beer:

A clean and crisp cold-fermented ale brewed in keeping with German tradition.

I think the Kölsch is one of the more overlooked and underrated styles of beer. Not exactly obscure, but not many people are out hunting for the latest Kölsch the way people hunt and gather new IPAs and Stouts. It is a style every brewery should have in their portfolio and every small brewery should have on tap – it is the beer style that “tastes like a beer” and a great style to draw people into craft beer. I’ve made the following comparison a couple of times when discussing the style in beer circles: a Kölsch is an ale that is similar to a pilsner. The comparison is apt (and I said this without initially knowing) that Kölsch ales are conditioned at colder temperatures the same way lagers are. In terms of being flavorful and enjoyable, Free Will nailed the style. Let’s start at the beginning, and answer the question, “Why did I enjoy this beer so much?”

Let’s look at the color, first. I was fortunate to get a perfect ray of sunlight to shine on this beautiful golden ale when I took my photo. Almost clear, bright golden-yellow with a nice head – you tell people to conjure up an image of “beer” and I’d bet 8 out of 10 people might have an image like the photo I snagged in their heads. I no longer have any cans of the beer in my fridge, but looking at that photo makes me wish I did.

So, like I said the beer looks inviting. Aroma is very clean and the first sip is extremely refreshing – I get a little bit of that pilsner/lager hint from the beer, but there’s some definite hints of fruitiness in the beer, too. I keep thinking to myself that this is a damned good beer with each successive sip or gulp of the beer. The most appropriate word I can think of to describe this beer is “clean.” There’s just a nice, well-rounded “beer flavor” to the beer that makes it work so well for me.

I like to have a lighter beer with my Friday pizza and this paired perfectly. Some beers pair specifically with certain types of foods, Crisper is a beer that has solid flavor of its own, but won’t intrude on any food you’re eating while enjoying the beer.

The ABV on this, like most Kölsch/ Kölsch style ales is pretty low at 4.4%. A beer for “session” drinking, a four pack you can enjoy over the course of a long afternoon or evening that will likely not dump you on your rear end. But unlike the big mass-produced beers at this ABV, this Kölsch is extremely flavorful. You’ll want to drink the beer for the flavor and not suffer through inferior taste. This beer has continued my personal trend of enjoying flavorful, low ABV beers.

If hasn’t become clear by now with many of my reviews and posts, then Pennsylvania – a neighbor state to New Jersey – has a great many breweries (the most beer produced per state) and I’ve been enjoying quite a few of those breweries. Peddler’s Village is a Buck’s County shopping destination and a couple of years ago, Free Will Brewing opened up a Tap Room in the center of the great outdoor village. A great spot that has been at maximum capacity the few times I’ve visited Peddler’s Village over the last couple of years. It doesn’t hurt that Peddler’s Village allows people to walk around with their cup of beer…and Crisper from Free Will is a damned fine beer to enjoy whilst walking around the lovely sights of Peddler’s Village. Again, flavorful with a low enough ABV that one pint won’t prevent you from driving home.

Peddler’s Village is about a half hour from my house, so when my wife had to go to one of the specialty shops while I was at work, she thoughtfully brought back a four pack of Crisper. She said she remembered me saying I like the style and figured it would be perfect for the summer. I married very well, to say the least because I couldn’t have been happier with this beer. If anything, it exceeded my expectations. Bottom Line: a Kölsch this good should be a staple in every brewery’s lineup.

One thought on “Beer Review: Free Will Brewing’s Crisper”