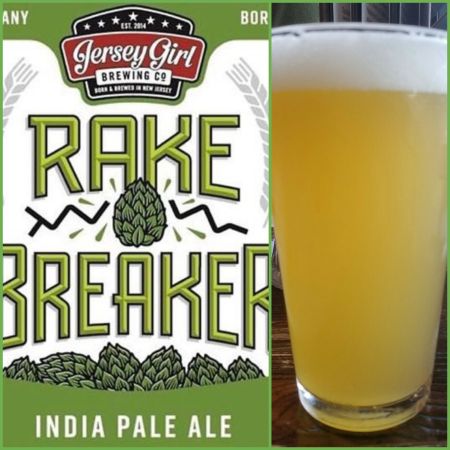 Tropical IPA with Mosaic and Amarillo. Fresh, and incredibly drinkable. A tornado of tropical hops will be sure to break your perception of traditional bitter IPAs.

Jersey Girl has been around the NJ beer scene for a few years now and I was lucky enough to visit the brewery last November. Supposedly, the name came about because the mash rake used in the brewing process broke because there was so much grain in the brew. At the time, I was relatively averse to IPAs so I didn’t try any of their hop-forward ales. What I had I enjoyed, but as they were tasters/part of a flight and the last brewery of five I visited that day, I didn’t feel a review of any of those beers would be appropriate or truly reflective of my true experience with the beer. Then I had their flagship IPA Rake Breaker and I knew I had to write about the beer.

When the waiter at 22 Tap and Grill delivered the beer to me, I was very pleased at the look. There’s a hazy, bright, inviting look to the beer that looks like the juicier IPAs I’ve come to enjoy. A whiff of the beer brought the hoped-for citrus/hoppy aroma I was hoping to get, which proved to be a nice hint of what the beer would deliver.

The first sip matched the aroma really well. A great combination of citrusy hops with a really nice grasping hop bite on the finish. Second sip was much of the same, proving Rake Breaker to be a really balanced India Pale Ale. Although untappd calls this an “American IPA,” I’ve seen Jersey Girl refer to this as a New England or Northeast Style IPA.

Whether this is a true New England IPA (I lean towards yes, based on the citrusy hops and the look of the beer) or an American IPA, Rake Breaker is an extremely pleasing IPA. The Mosiac hop is a really nice hop that has become more prevalent over the past couple of years because of the way it brings the bitterness, aroma, and citrus/sweet flavors together. The Amarillo also has a nice citrus profile, too. The two hops combined bring the citrusy hops together for that pleasing flavor I mentioned earlier.

As I said, I overlooked this beer (despite it being something of a flagship for Jersey Girl) when I visited the brewery for my birthday tour last year. I won’t make the mistake again. With all the buzz that breweries like Carton, Kane, Twin Elephant, Cape May, and Three 3’s gets for their IPAs, Rake Breaker shouldn’t be lost in that shuffle and overlooked. In other words, a quality IPA that proudly represents the quality of brewing one can and should expect from a New Jersey brewery.

My only minor complaint isn’t necessarily about the beer itself, but about the availability. I see plenty of NJ brews in the stores in my immediate travel radius (i.e. the liquor stores on my way home from work), including beers from fellow Hackettstown brewery Czig Meister. For whatever reason, I haven’t seen Jersey Girl’s beers in those same shops since the brewery first started canning and distributing. On the other hand, I have been looking for an excuse to make the drive up to Hackettstown again.