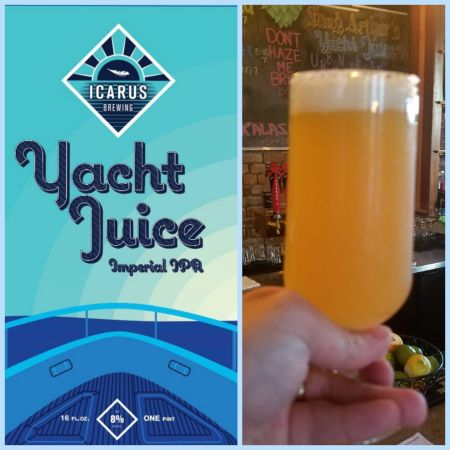 This picture doesn’t do justice to the bright beautiful beer. Didn’t want to be THAT guy snapping a photo in the crowded bar.

North East style IPA filled with Citra, Mosaic, and Columbus leaving it with a combination of citrus and dank aroma and flavor. We may not own a Yacht, but at least we can enjoy the Juice.

As I said last week, few breweries have made as powerful and quick an impact on the New Jersey Craft Beer scene as has Icarus Brewing in Lakewood, NJ. One of the beers that helped to engender that positive vibe over the past year is what amounts to their Flagship beer, a New England / Northeast IPA they call Yacht Juice, continuing the trend of Jersey Shore breweries (started by Carton) of giving at least one beer a nautically-themed name. Enough about the name, more about the liquid in the glass.

The beer is poured into a slim 10oz flute-style glass (which seemed an odd choice of glass-style for the style of beer, I would have gone tulip), likely because of the relatively high ABV of 8%. Aroma is sweet, hoppy, and juicy. The lighting was not the greatest in Project P.U.B. at the time I had the beer, the bar area was very crowded. That said, the beer was a pleasant yellow-orange is not done justice by my photograph. Between the color and aroma, the beer is very inviting; in other words, this seemed to be the profile I’ve come to enjoy the most in IPAs.

First sip is a nice pop of flavors – pleasant hoppiness that hits the sweet and juicy which profile. The description attributes three hop varieties in this beer, but for me the Citra is the dominant of the three. The level of juice in this one has a pleasant bitterness, I’d guess from the Mosaic hops. The Columbus hops are the hops with which I’m most unfamiliar, so I’m not sure how that factors into the beer, but I’m guessing it helps to bring a really nice balance between the Citra and Mosaic.

Some of the hops that emulate fruit flavors give you a really distinct fruit profile, some orangey, but this one is almost like a tropical punch with a heavy dose of orange juice. That said, don’t think ths a carbonated glass of orange juice. Oh no no no. This is a beer through and through and the hop finish on this one latches on to your taste buds and makes it really tough to drink this slowly.

When this beer started making waves (no pun intended) in the NJ Beer community about a year ago, I didn’t give it much consideration since I thought it was “just another hazy IPA.” I was certainly wrong about that, this is a beer that really lives up to the hype. I’m going to have to make sure I head down to Icarus and/or make sure I snag a four-pack when the next delivery drops at my local beer store.

As I suggested in the opening paragraph, a growing number of nautically-named beers are being brewed by NJ Craft Brewers, the first (and some would say the best) being Carton’s Boat Beer. Although Icarus is playing in similar waters with Yacht Juice, the style is a few steps removed from the sessionable Boat and stands on its own as a delicious New England or “Northeast Style” IPA. Aside from bearing nautical names and being somewhat hop-forward, the two beers are quite different and excellent.

Recommended, link to Untappd 4.25-bottle cap rating. To be honest, I continue to vacillate between leaving this at a 4.25 or upping it to 4.5. I guess I’ll have to make the sacrifice and seek out the beer again. 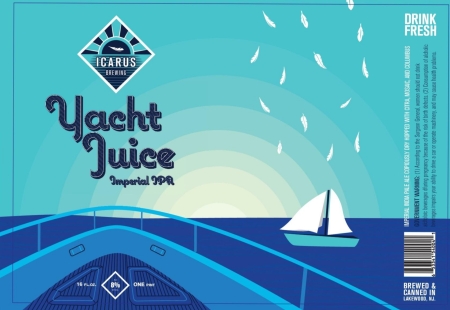