With December, the Winter Ales and Stouts are filling the shelves. Many filled my glasses and comprise a majority of the new beers I enjoyed this December.

As has been tradition with my wife and I the last decade or so, on the first Saturday of December, we tag our Christmas Tree at a local farm with our friends and celebrate with brunch and adult beverages. This year, my friend had a Six Point variety pack, including Resin, their Double IPA and Sweet Action their blonde. I’ve come to realize I’m just not a fan of much of Six Point’s output. Later in the week, at a work dinner, I had a fine New Jersey brew: Philoso-Rapper, a Belgian Strong Golden Ale from Departed Soles out of Jersey City, NJ. 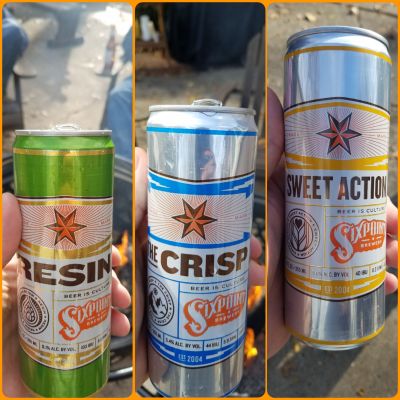 I stopped at Flounder and picked up a growler of Delta House Stout, their tasty interpretation of a Milk Stout, to bring to a gaming session. At that same session I had some Viking Blood mead, also quite good. I need to explore the world of mead more thoroughly. One of the pleasant surprises of the month was a solid Pilsner from Industrial Arts Brewing, Metric, which was part of a recent Wegman’s Craft Your Own 6 Pack.

I dove fully into the Christmas/Winter Ales having this year’s version of Anchor’s Anchor’s Christmas Ale beer and Rogue’s Santa’s Private Reserve. Anchor’s was good, but I enjoyed previous recipes/iterations more, the 2017 batch was stronger on some spices that didn’t quite work for me. Rogue’s revamped Santa beer, on the other hand, I found to be excellent. A sweet cherry Dark Strong Ale, the beer was perfect as a dessert beer and reminded me of Ommegang’s Rosetta, but without the sourness. Also from my 6 Beers of Christmas Future (2017) was  Two Roads’ Holiday Ale one of the more unique holiday / Christmas beers I’ve had. There’s an interesting malt/sweetness to the beer that really sets it apart.

The Thursday before Christmas was the monthly Brews and Board Games at Lone Eagle. This brewery continues to impress me with how the beer has been getting better and more consistent over the past year. First up was their Abbey Road Dubbel, a fantastic interpretation of the classic Belgian style. The second beer I had was one of their staple brews, 007 Golden Rye Pale Ale, the first Rye beer I’ve had in a while and the first one I can remember enjoying this much. I think I need to reassess this style, particularly the German interpretation known as Roggenbier.

Abbey Road Dubbel on the left, 007 Golden Rye on the right

Finally, Christmas arrived. Well, Christmas Eve, which is when we get together with my side of the family. Christmas Day is spent with the In-laws. Fortunately, I’m not the only person who enjoys craft beer either day, so for years I’ve been bringing special beers to share on both days. I started off sharing possibly the best beer I’ve had all year with my dad, Goose Island’s 2017 Bourbon County Brand Stout. As I have the past few years, I brought a local growler to share with everybody, in this case it was Demented Brewing’s Gluttony and incredible coffee stout that is perfectly balanced. Just as good (if not better) than Firestone Walker’s Mocha Merlin. Unsurprisingly, the growler did not survive the night. My dad also brought out a bomb of Founders Doom the IPA entry in their Barrel Aged series. This is one of the best, smoothest, most balanced IPAs I’ve ever had. 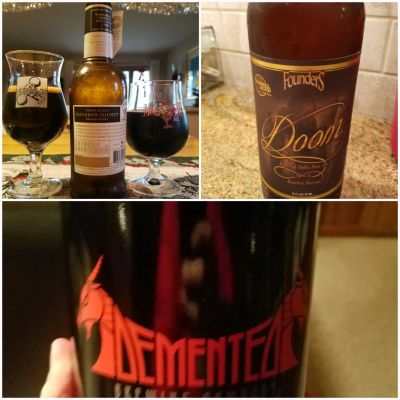 On Christmas Day, I had the Corsendonk Christmas Ale my folks gave to me as a gift the night before. I can taste why this is such popular, traditional beer around Christmas Time. This is a very solid interpretation of a Belgian Strong Dark Ale. The other Christmas beers I brought was 10 Lords a Leaping from the Bruery. This beer tasted like the best parts of a Witbier and a stout amalgamated into one beer with lots of spice complexities. 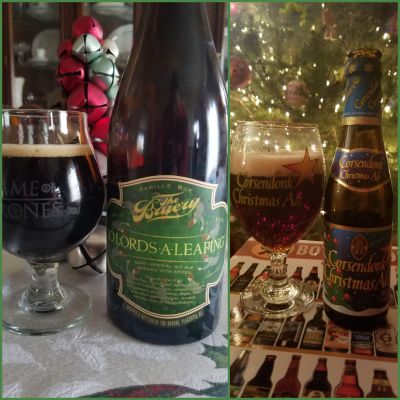 The final week of 2017 brought still more beers. I had a bottle of Chimay Blue, the Belgian Trappist brewery’s Strong Dark Ale which is a wonderful World Class ale. As I said in my Tuesday review, one of my team members at work got me a 4-pack of Spellbound’s Porter aged on Palo Santo Wood as well as their fantastic IPA. Spellbound’s IPA had the perfect balance of hops and malt. I continued my trek through Flying Fish’s Exit Series with Exit 7 Pork Roll Porter at Hub City Brewhouse, a local tap house in New Brunswick, NJ. Unlike another pork infused beer from a NJ brewery I had earlier in the week, Flying Fish’s beer was really well balanced with the right amount of spice and flavor from the pork roll. The other beer was a fantastic Belgian Brown ale from Leffe.

Lastly, New Year’s Eve for the last beers of 2017. The last few years, my wife and have been going to our friend’s house and just about everybody brings their own beer, but everybody winds up sharing. In addition to a six-pack of Victory’s Prima Pils, I’d been holding a Chocolate Bock from Samuel Adams for a couple of weeks and figured New Year’s Eve the right time to have it. I’ve had the beer in the past, but not in a very long time, long before joining untappd. It was as good as I remembered it. I also had a Wet Dream from Evil Twin Brewing, a brown ale with coffee and Flower Child IPA, a well balanced brew from Cambridge Brewing Company.

So there you have it. The “new to me” December 2017 beers. If I’m calling out the best, the top would definitely be Spellbound’s Porter aged on Palo Santo Wood, Founders’ Barrel-Aged IPA Doom and Demented Brewing’s Coffee Stout Gluttony. I’m excluding Bourbon County Brand Stout since I’ve had a previous year’s version.