October, the month for Oktoberfest beers and Pumpkin Beers. A time when Porters and Stouts are becoming more prominent on the shelves. There are always many good beers to be had, but I do love porters and stouts. That’s the variety of beers I had for October, Pumpkins and Stouts, mostly.

I started the month off with an interesting beer from New Belgium, part of their Lips of Faith series of beers called Clutch. My wife picked up the beer for me since we are fans of the band Clutch, who they partnered with New Belgium for a that is a melding of styles – 80% Stout / 20% Sour. Sour beers are probably more hit or miss for me than any style since the flavor profile can vary so much, but this one worked quite well for me. Since my brother-in-law is also a big fan of Clutch, I shared the beer with him, though I think I enjoyed more than he did since I finished what I poured for him.

Next up on the new to me beer list for October was a very tasty Dunkelweizen from Veldensteiner, a German Microbrewery whose beers recently appeared in NJ. I’d get this one again for sure and will be trying the other offerings from this brewery over the next few weeks. I’ve been enjoying the majority of Flying Fish’s Exit Series of beers, so I finally got around to trying Exit 18 – Baltic Porter which was quite good. This a very dark porter with a nice hit of sweetness, though a little stronger on the licorice than I typically like. Baltic Porters tend to be a little more bitter than standard porters, but the high ABV (9.5%) in this one, I think, smoothed out the bitterness. Although this one was a 750mL bottle, I wouldn’t be surprised (and hope) that Flying Fish reissues this one in 12oz bottles either in 4-packs or part of their annual “Exit Series” Variety pack.

The monthly “Brews and Board Games” meeting at Lone Eagle was a little earlier for October, falling on the 12th. I had a few of their beers I hadn’t previously tried in the flight (from left to right, below): Belgian Pale Ale, which I thoroughly enjoyed, enough that I ordered a pint of it after the flight; ESB, which was tasty; New England Chowdah, their take on an New England IPA which didn’t quite do it for me; and Tropical Stout which was OK for what it was (a stout with some pineapple/coconut flavors), but just not for me. I may pick up a four-pack of the Belgian Ale on my next visit to the brewery.

I went into detail about the O’Fallon Pumpkin Pack last week as well as Blackbeard’s Breakfast a couple of weeks ago. A couple of annual releases were next to be pulled from my refrigerator: this year’s version of Two Roads’s Roadsmary’s Baby is just as tasty as it was last year. Founders’ released their Breakfast Stout in October and it is always a must-get stout for me. There were more notes of coffee than I remember from past iterations of the brew, but a solid sipping beer nonetheless. I may let one of the bottles to age for at least a year.

A beer I’ve been looking forward to trying since seeing it announced was the latest installment of Victory Brewing’s Blackboard series, Black Forest Cake with Cherries. I’ve enjoyed most of the beers I’ve had in this series to varying degrees, I think I only missed the Agave IPA and the Oatmeal Porter with Hazelnut. This one was quite good, though a tad more on the bittersweet end of chocolate than I expected. I would even say this is a tamer, sweeter version of their popular Storm King stout (a big Imperial Stout with a 95 IBU and one of the few Victory brews I don’t like too much). The chocolate and cherries really balance the bitterness in Black Forest Cake with Cherries and makes for a really tasty beer. Like the Saugatuck Blueberry Maple Stout I reviewed at the beginning of the month, I found myself enjoying the second and third beers (each days apart from each other) more than the first. 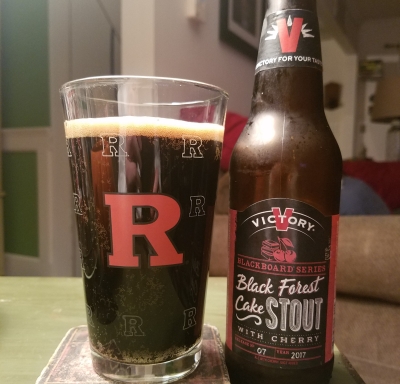 My wife stopped at a bottle shop on her way home and picked up a couple of beers I never had, but definitely style-wise are in my wheelhouse. Continuing the Pennsylvania theme, one was a beer I’ve been seeing and intending to try was Crunch from Manayunk Brewing Company, which is a peanut butter chocolate porter. Boy did the peanut butter assert itself. This beer is one that is so potent with the flavors that just one is fine for the night. I’ve been eyeing other beer quite a while, too: Skull Splitter from Orkney Brewery in Scotland. This is a fantastic, sweet, bold, and malty Scotch Ale. I may review this one in more detail, but suffice to say, a lovely Scotch Ale.

The last weekend in October, I happened to try four new beers during a Chili Cook-Off I was judging. I picked up a six pack of another beer I’d been looking forward to since I learned of its release, Mocha Merlin from Firestone Walker as my “beer to bring.” Dear lord what a sublime and perfect stout this is. All the flavor goodness of coffee without the accompanying bitterness some coffee stouts bring. I’ve had the Nitro Merlin Milk Stout and the Velvet Merlin Oatmeal Stout in years past so I had high hopes for this variant on the Velvet Merlin “brand.” Mocha Merlin is just so damned good, it really is tough for me to say which of those three I enjoy the most. 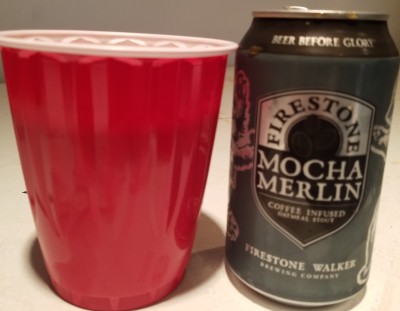 Since this Chili Cook Off attracts quite a few people (between 50 and 80 every year), there are a lot of different beers floating around. One of my friends’ guests happens to live 7 minutes from Victory Brewing and he brought three growlers of delicious beer from Downington, PA. The first I had was Whirlwind Witbier an excellent Witbier that, despite the growler being filled the day before, was still quite good and pretty fresh. I could swear I had this years ago, long before joining untappd, although I haven’t seen it in stores recently. The other two Victory brews were Vital IPA and Hop Devil. My aversion to IPAs is waning so I tried both and enjoyed Hop Devil much more with its maltier profile. I can definitely see why this beer helped to establish Victory’s outstanding reputation.

I closed out the month with Winter is Here, the latest Game of Thrones beer from Brewery Ommegang, but you already read about that on Tuesday. A very consistent month for new beers, there weren’t any that were drain pours and all were quite good. On to November! With November 2 (today) as Stout Day, the stout season is officially here. The best beer of the month for me was the Mocha Merlin, so I’ll probably have at least one of those on Stout Day.