This Sunday, the biggest show in the history of HBO returns, Game of Thrones so what better time to feature the  officially “licensed” beers made by the fine folks of Brewery Ommegang inspired by the show. I’ve been a fan of the books for years having read the series when the first book published. I was lucky enough to attend a couple of George R.R. Martin’s signing events over the past couple of years, too. 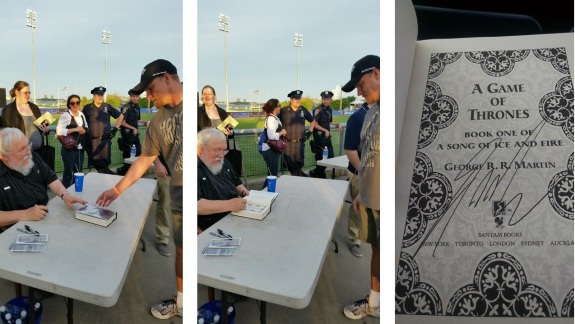 When HBO decided to make what even author George R.R. Martin considered an unfilmable project, the craft brewers of Ommegang knew they could complement the show. The show was an immediate success when it debuted in 2011, two years later in March 2013, the first Game of Thrones beer from Brewery Ommegang was released – Iron Throne Blonde Ale, a refreshing, relatively light beer at 6.5% ABV. 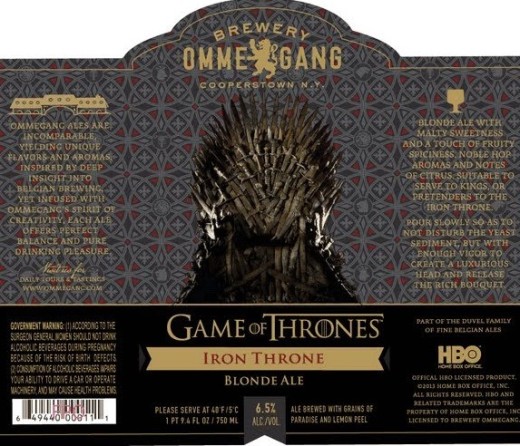 This was a smart move and a very approachable beer,  with hints of citrus. I recall having a sample at the second Garden State Brewfest in May 2013, when the event was held walking within distance from where my  in-laws live. I also remember the box/case of bottles Brewery Ommegang had at the event went very quickly so I was fortunate that a local favorite bar had it on tap a couple of months after that. As of this writing, Iron Throne is the only one of the Game of Thrones beers I haven’t checked into Untappd as I didn’t sign up until about a year later. 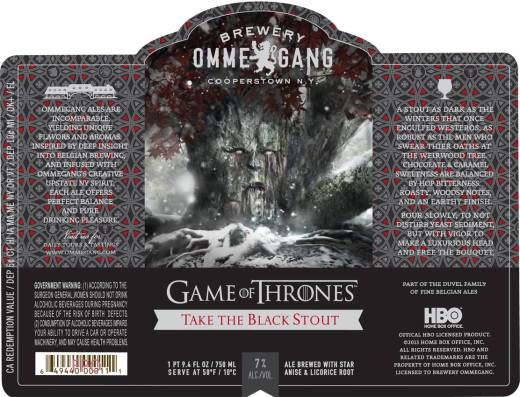 Later that year, the second Game of Thrones beer was released, a rich earthy stout clocking in at 7% ABV: Take The Black, which is named as an homage to the Night’s Watch. These men, often bastards or criminals who “commute their sentence” by taking the black of the Night’s Watch and live at the Wall. They are humanity’s defense against what may emerge from beyond the Northern borders. I recall enjoying the beer, but there was a bitterness to the finish that didn’t complement the chocolate profile so well. Not a bad beer, but I thought the Iron Throne was a better beer. (untappd check-in) 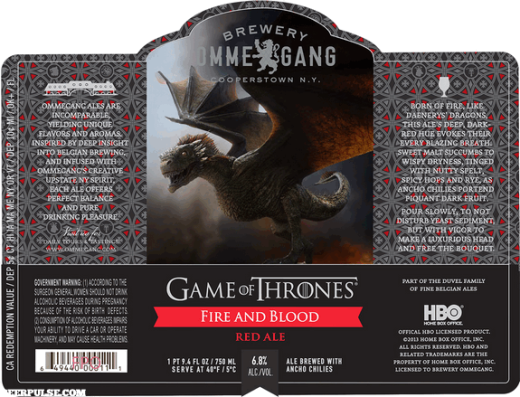 The third beer, Fire and Blood is a 6.8% Red Ale with chili peppers launched March 2014 about a month before Season 4 began airing. This beer is as an homage to the fire breathing dragons of House Targaryen and their matriarch Daenerys. The series Martin gave the books is A Song of Ice and Fire so there’s a thematic parallel there, too. I only recently began appreciating beers made with spiciness so when I had this one a few years ago, I wasn’t too keen on it. There seemed to be a fruitness to counter the spice at the end, but it is still a well-made beer. (untappd check-in) 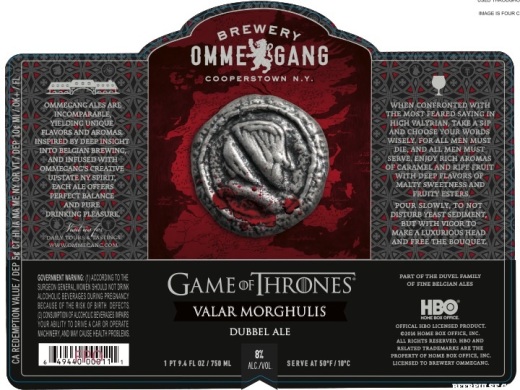 October 2014 brought the fourth Game of Thrones beer and up to that point, the Game of Thrones beer I enjoyed the most. An 8% Belgian Dubbel, Valar Morghulis takes its name from one of the key phrases from the series which translated from the ancient language of Valyrian, means “All Men Must Die.” It should be no surprise that this is a well-made, delicious beer considering how very Belgian it is in nature. Ommegang’s year-round Dubbel, Abbey Ale, is incredible beer, earning a perfect 100 from Beer Advocate. Valar Morghulis doesn’t have as much of a fruit hint as does Ommegang’s Abbey, but it is still a delicious beer. I’d especially love to find another bottle of this in the next couple of days to enjoy while watching the season premiere on Sunday. (untappd check-in) 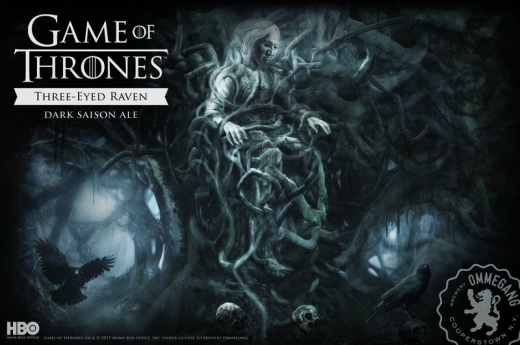 Season Five and beer number 5 in the Game of Thrones series synced up and released at the same time in April 2015. Beer #5 is a 7.2% AB Dark Saison named Three-Eyed Raven after a creature of prophecy and supernatural power whose visions have profound effect on the characters and their actions. This is a pretty unique beer, blending elements of a farm house Saison with a dark ale/stout. The IBU on this one is high at 80, but it is balanced by a mellow fruitiness on the finish. I would love to give this one another try, too. (untappd check-in) 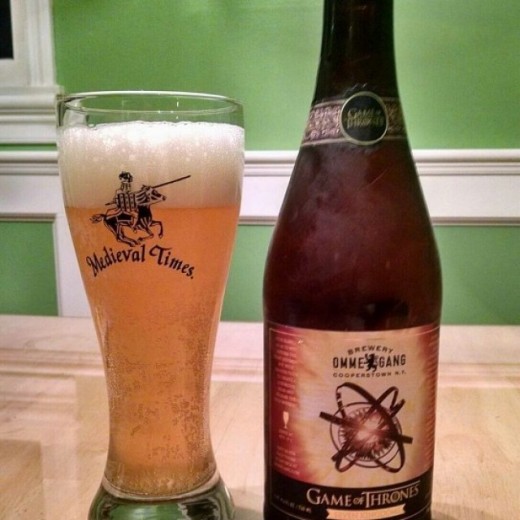 Two things changed with beer 6. Rather than a fall release, it was released closer to the premiere of Season Six of the show in March 2016. The beer bottle’s shape/style changed slightly, too. This installment of the beer series takes its name from the collective realms where the story takes place, Seven Kingdoms, which is a Hoppy Wheat Ale at 6.9%. This is probably my least favorite of the Game of Thrones beers. I really like wheat beers, but there’s too much of a hop presence in this one for my liking. I know, the name/style says it right on the label, but it just didn’t work for me as well as all the others. (untappd check-in) 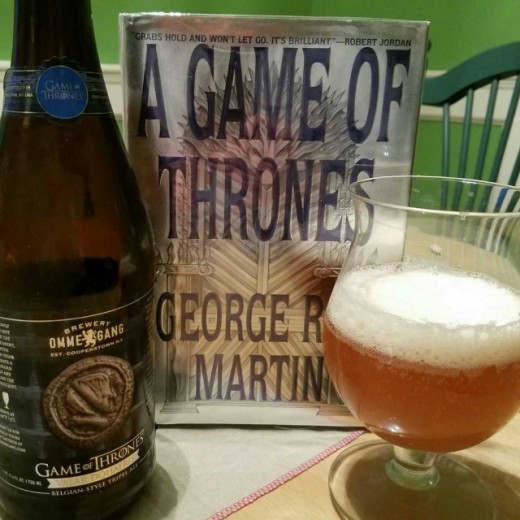 That’s a signed first edition of A Game of Thrones

Season Seven begins this weekend (July 2017), three months later than usual, but returning to the dual year release, Ommegang released beer number 7 in September 2016. This is currently my favorite of the eight beers they’ve released, a big 9% Belgian Tripel, Valar Dohaeris. The name is a companion saying to Valar Morghulis and means “All Men Must Serve,” (in this case beer) and a companion or “sister beer” to that earlier Belgian Style Dubbel. Oh boy is this a delicious beer and has the yeast, spice, banana, and bready profile you would expect from a Tripel. Since this a 9% beer, it might be a good idea to slowly enjoy this one over the course of an episode or two. (untappd check-in) 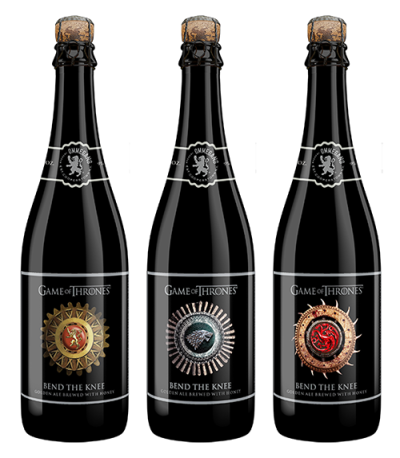 The most recent brew is timed slightly ahead of the premiere of Season Seven, Bend The Knee a Belgian Golden Ale that does not feel like the 9% the label indicates. It is more malty than I’d expect a golden ale to be, but the Belgian yeasts, along with the honey added during the fermentation seems to cut the bitterness some Golden Ales can exhibit. (untappd check-in)

So, those are the Game of Thrones beers. 8 beers, seven seasons and 5 books as of this writing.

All the books in the series, and all the bottles except the most recent, “Bend the Knee”