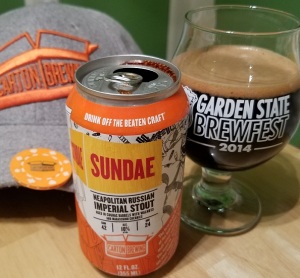 From the beer’s description on Carton Brewing’s Web site:

The first stride along this path was enough Super Galena in the middle of the boil leading a strawberry hop tone in vanilla and chocolate malt notes creating a Russian Imperial Stout with a different gait. The move to “let’s throw some Neapolitan ice cream in there and see what happens” isn’t a giant leap. Going from a big bold stout with chocolate vanilla and strawberry freeze dried ice cream to “brandied walnuts and a cherry on top right?” is actually a small step. Sundae is Cosmonaut put down in cognac barrels with maraschino cherries and walnuts for a year. Drink Sundae because this one’s for you, Mr. Gorsky.

Carton Brewing has been at the forefront of NJ Craft Brewing since they’ve been brewing and selling beer in 2011 for many reasons. Carton’s range of experimental styles (adding prickly pear cactus to one beer or white truffles to another, for two examples) are akin to an artisanal chef.  The wonderful taste of their beers drive people keep seeking out those beers and making the trip to the Atlantic Highlands to get cans of their beer. They brew one of the most sought-after limited-release beers in the region,  Regular Coffee. Long story short, they are doing things smart, artistically, and with a passion and chances are I’ll be writing about more about Carton here in the future.

One of their regularly brewed beers is Cosmonaut, a Russian Imperial Stout and Sundae is a variation on that beer. I haven’t tried Cosmonaut so I can’t compare this variation to the original. Pouring Sundae from the can, what I initially took to be a black beer was actually a deep burgundy/crimson. You know, that dark tone of red that can be indistinguishable from black until the light hits it the right way and then all you see is that deep red. The aroma is a sweet rich smell that lingers nicely before drinking the beer.

From that initial pour and inhale, I kept thinking, “What a surprise this beer is.” It looks like a stout, has some of the dark rich flavor profiles of a stout, but feels a slight bit thinner than most stouts I’ve had. The combination of these characteristics makes Sundae one of the more unique beers I’ve ever consumed.

I was concerned about the addition of walnuts. I don’t mind nuts of any kind on their own so much, but I am not a fan of when they are added to brownies or ice cream. I shouldn’t have worried, the presence of the walnuts is subtle and really complemented by the beer being aged in the cognac barrels with the cherries.

Russian Imperial Stouts tend to have more of a bitter aftertaste and are sometimes slightly higher in hop presence than most stouts. Again, the cognac and cherry presence buried that bitterness and the aftertaste of the beer is more akin to a sweet aftertaste than bitter aftertaste, which makes this a perfect dessert beer, as if the name of the beer didn’t already imply that. What was also impressive is how well-hidden the relatively high ABV of 10% is. Perhaps because I sipped the beer over the course of an hour it didn’t hit me as much as I expected it would have.

What this beer reminded me of most was when you are at the end of your ice cream sundae or bowl of ice cream. You’ve got your favorite toppings, the ice cream is melted enough that when you swirl all the ingredients together you’ve got what amounts to ice cream soup. That was always the most fun part of ice cream to me and that’s what this beer evokes – sweet, tasty fun. 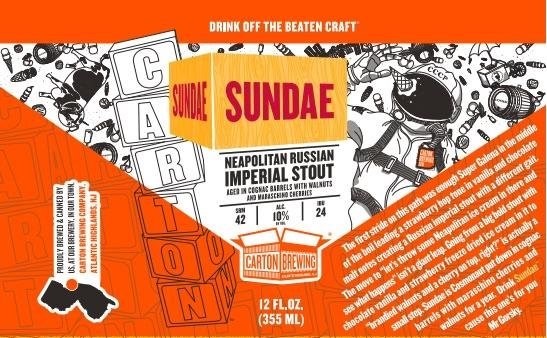