The month of December began with another bottle share, but even outside of that great day, I was able to enjoy quite a few very good beers. Some Christmas/Winter-adjacent, stouts, and the usual mix of NJ, regional, and nationally available beers. .

Shockingly, a beer from Icarus Brewing appears on this list. Kalishnikov is one of their annual favorites and I know why, a delicious, super-boozy (14% ABV!) Stout that doesn’t feel like it has that much alcohol in it. Russian Imperials can be very bitter on the finish, but the addition of honey in the brewing process gives the beer a nice hit of sweetness on the finish. I’ve had one of the barrel-aged variants, but I think I prefer the base stout more. .

I’ve been trying to sample at least one of the more popular and widely available Belgian Christmas beers every year and this year I landed on bottle sporting the happy monk. This beer turned out to be a really nice ale. The classic from St. Bernardus is basically a Quadrupel (10%ABV), but with more fruit character (some cherry notes, maybe?) than their standard Quadrupel. This is definitely a slow sipper and a beer you should let warm a little bit to room temperature to fully enjoy the aroma and full flavor of the beer.

Over the last year, Flying Fish continued to evolve, brew new beers, and tweak their classic beers. Winter Cru is a reboot of their Winter seasonal (Grand Cru Winter Reserve) with a great label and tweaked recipe. The original wasn’t one I cared for too much, so this change in recipe is very much welcome and the beer is more full-flavored My tagline: “A Belgian style ale w/hints of cinnamon and nutmeg will settle you in for a comforting Christmas and Winter Holiday.”

This is an annual release Lagunitas that is often highly-sought after. That’s because it is a delicious, very balanced barrel-aged stout. The barrels are Willett Rye and what an excellent blend of flavors – coffee, roasted malt, rye whiskey. This is quite simply a fantastic barrel-aged stout.

You never know what you’ll find in a dive bar and there’s a pretty great dive bar in my town – The Royal Bar. They have a pretty standard selection of beers, but every time I’ve gone to the Royal, I’ve always found at least one gem. This most recent visit the gem would be Psycho Simcoe, a fantastic IPA from the South Jersey brewery. This is a wonderful blend of dank and juicy hops (Simcoe, obviously, but also Mandarina Bavaria for the juiciness) that make for a delicious beer – juiciness at the start with a nice dank finish.

I say this every time I mention beers from Allagash, but I need to get more of their beers because this one a, “Halloween seasonal” is excellent. There’s a wonderful start to the beer with flavorful roast, then it moves to a fantastic blend of hops and then finishes with a sweet hint of coffee. Allagash brews primarily Belgian styles and there really isn’t a stout in the catalogue of Belgian styles, so this one is considered the closest to it a “Belgian Strong Dark Ale.” .Whatever you call it, the beer is really, really tasty.

My work pals and I had a Christmas “Gathering of the Fellowship of the Beer” in the beginning of December, which was fun as it is everytime we get together to share new beers with each other. The standout at that gathering was a bottle of Samuel Adams Utopias (which takes center stage below in the photo of the beers we shared), which one of our friends generously shared. The bottle was from 2017 and was unlike any other beer I’ve had. The only slight negative is that it smelled like slightly of nail polish, but the flavor … heavenly.

So here we are with part two of my Twelve Beers of Christmas duology. Why twelve beers? Well, that’s fairly obvious since beer comes in six-packs and many, many breweries will distribute 12-pack variety packs featuring multiple seasonal brews like Samuel Adams, Dogfish Head, Saranac,  and Sierra Nevada to name the most prominent ones. Whereas the previous Christmas 2017 Beer post shone the light on beers I’ve had and enjoyed during past Winters and Christmases, today’s post features a half dozen Christmas/Holiday/Winter beers I’d like to try in the future, as in this year for at least a few of those beers. I suppose the fairest way to highlight these beers is alphabetical by beer name, so here goes…

Belgian Freeze (River Horse Brewing, Ewing Township, NJ)
A brewery I haven’t written about very often, especially considering how much I enjoy the majority of the brewery’s portfolio coupled with having visited the brewery is New Jersey’s own River Horse Brewing. River Horse is one of the original New Jersey Craft breweries (they started in 1995 and were reinvigorated in 2007). The one beer from the Ewing Township brewery I’ve highlighted on the Tap Takeover is their Summer Blonde (my favorite summer ale). The “sister” or complementary seasonal offering to that is, Belgian Freeze which is considered a Belgian Dark Ale. This is a beer that’s always around bottle shops, but for whatever reason I never picked up a six pack or even a single in the mixed six packs at Wegman’s. I’ve liked nearly every beer from River Horse, so a beer that plays to the Belgian styles I’ve been drawn to more recently should be a beer I enjoy.

Holiday Ale (Two Roads Brewing, Stratford, Connecticut)
As readers of this blog may be aware, Two Roads is one of my favorite breweries. As all the posts at the link to the left where I at least mention Two Roads demonstrates. They are a relatively new brewery, only about 5 years old (starting in 2012), and I’ve enjoyed most of what I’ve had from them. I’ve yet to try their Holiday Ale, the style Two Roads went with for their holiday offering is a very obscure style and I can only recall trying one in the style previously: Biere de Garde. This beer, according to Two Roads, is a Biere de Noel, a holiday take on the French style of beer. France is not a country that comes to mind when I think of beer and brewing traditions, but the fine folks at Two Roads are experts on all styles so I expect this will be a tasty, malty brew.

Lovely, Dark, and Deep (Brewery Ommegang, Cooperstown, NY)
Ommegang brews mostly in Belgian styles, but seeing something slightly askew from their typical line of brews can be welcome. Such is the case with Lovely, Dark, and Deep, an Oatmeal Stout listed on their Web site as a “Winter Ale.” Outside of the Game of Thrones Take the Black Stout, I don’t recall Ommegang making many (or any) stouts. Makes sense since there is no true Belgian Stout style, just a “Dark Ale.” That said, I remember seeing this last year and passing on it, but I think I’ll go for a six at some point this year. I really like oatmeal stouts (in fact, River Horse’s Oatmeal Milk Stout is one of my favorite stouts) so this one seems like a no-brainer for me. 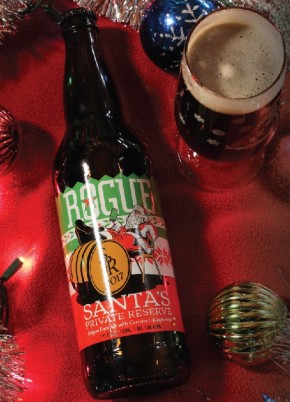 Santa’s Private Reserve (Rogue Brewery, Newport, Oregon)
This seminal Christmas beer from Rogue seems to have changed up the recipe in 2017. In past years, I recall this being an Imperial Read, which makes sense considering Santa’s attire. I don’t typically gravitate to Red Ales, their hop profile isn’t to my usual liking. I may have even had an earlier version of Santas’s Private Reserve years ago, but I can’t recall. This year; however, Rogue lists the beer Belgian Strong Ale with Cherries & Raspberries which sounds wonderful. This beer is available only in 22oz bombs and probably on draft. 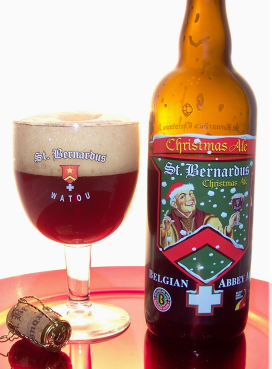 10 Lords a Leaping (The Bruery, Placentia, California)
The Bruery is a very high-end Craft Brewer out of California who only seems to distribute their beer in 750ml bottles and on draft. They’ve been working a long game, in terms of brewing projects – The Twelve Beers of Christmas. When I got deeper into the Craft Beer world a couple of years ago, I discovered this line of beers with the eighth installment, 8 Maids-a-Milking which I loved. I may have enjoyed the 2016 installment 9 Ladies Dancing even more. I’m really, really looking forward to the 2017 installment and tenth beer 10 Lords a Leaping which they call a dark wit and includes, appropriately enough, 10 different spices. I can’t say I’ve had any dark witbiers, but this sounds delicious. FWIW, untappd lists it as a “Belgian Strong Dark Ale.”

So there you have it. 6 beers I hope to try this Christmas and Winter Season. Don’t know if I’ll get to all of them (hopefully a couple of the 12 oz bottles are available at my local Wegmans so I can “craft my own six pack“), but I expect to have at least a few of them.