A delightful, well-balanced sour ale that showcases ingenuity and whimsy. 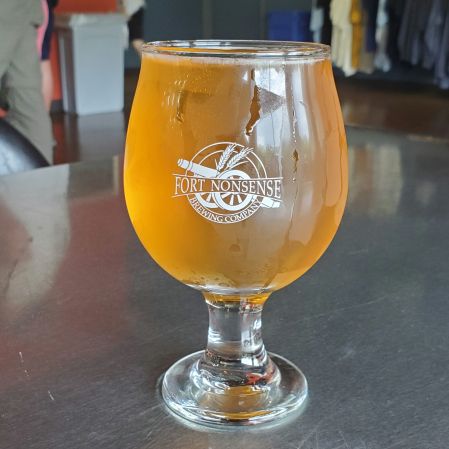 Fort Nonsense was the subject of one of my early Brewery Spotlights and at the time, I found some things to enjoy, but I was perhaps more critical of the brewery than any other brewery I’d featured before or since. Fast forward four years, the brewery moved to a much larger (and lovely) facility, and their reputation has grown considerably, their sours in particular. So, as has become tradition the past couple of years, my friend and I decided to visit a brewery before enjoying an AEW Pay Per View.

I wasn’t too sure what I was going to have when I arrived at the brewery, there’s no taplist on their website or untappd page, but this one stood out to me on the big board behind the bar. It was different enough and I enjoy the combination of chocolate and orange. The beer is named in one part for a Jaffa Cake (a chocolate and orange confection made with Jaffa oranges) and the other part for Jabba the Hut. The flavor combination as well as the  play on words helped to make the beer stand out.

Given the beer is 8.3% ABV, Fort Nonsense only offers the beer in 10oz pours, which is what the beertender handed me. It doesn’t look out of the ordinary, there’s an aroma of orange in the beer. That’s to be expected, but still inviting nonetheless.

That first sip is extremely pleasant. The orange and chocolate are perfectly blended and in harmony with each other. The orange is the initial flavor that comes to the fore, it is pleasant and refreshing. Then comes the chocolate, like a nicely frosted cake or cookie it doesn’t dominate, but accentuates the other flavors. What I appreciate the most is that the beer element is still present, slight hops, some malts.

You may think chocolate is a peculiar ingredient for any beer outside of a stout, but it works so well in Jaffa the Cake. After this second visit to Fort Nonsense and first at their new facility, I’d have to recommend visiting for a nice variety of beer styles. I plan on visiting again in the future.