“A flavorful, low ABV beer perfect for summer and poolside beer from the Union County brewery.”

We took Wrought Gold, our American blonde ale brewed with fresh blood orange purée to deliver the ultimate refreshment. This summer sipper is sure to satisfy with smooth sensations of sweetness. The base beer boasts smooth, round flavors of malt and slightly juicy Liberty hops, fermented with an English ale yeast.

A relatively short amount of time for another Blonde Ale considering I don’t drink many of them. But the frequency of these two Blonde Ale reviews should speak to their quality. That said, this definitely different than the previous Blonde Ale featured here at the Tap Takeover. Two Ton has been around the NJ Craft Beer scene for a few years, I first sampled their fine brews during the 2015 Garden State Brewfest. I remember their beer being tasty and the owners, brothers Matt and Jim Barbiere and their father Mario, being extremely nice guys.  At the time, Two Ton was contract brewing with their HQ based out of Linden, NJ, my hometown. More recently (in 2018), they opened in Kenilworth, NJ. This past year, they began distributing cans of their beer which leads to this beer specifically.

Blonde Ales are typically easy drinking, approachable beers. I’ve had the original Wrought Gold and remembered enjoying the beer so I was pleased to see this variant appear in the refrigerated shelves of my local Wegmans. I had a feeling it might be a good poolside / summer beer and I had a few people coming over that day, one of whom loves Blood Orange.

Pop of the can and the strong, pleasant, inviting aroma of the Blood Orange asserts itself. The beer pours a reddish gold and the potent aroma of citrus/oranges is even more noticeable. Although the fruit is “Blood Orange,” the look of the beer, is more of a “strawberry blonde.” Regardless, the beer looks as I would expect it to look.

The pronounced Blood Orange flavor dominates. That is a feature, not a bug, by the way. Blonde Ales are often not too assertive, they are beer flavored beer for the most part. The American versions at least, tend to not lean too much on the malt, not too much on the hops so the beer style is good for its approachability and its ability to take on a flavor adjunct. I mentioned the citrus element from the Blood Orange…that is quite different than the citrus element some hops impart. There’s a very distinct citrus sweetness that I can only compare to the most potent orange juice I’ve had blended with beer. It makes for a good combination, at least for my taste buds. 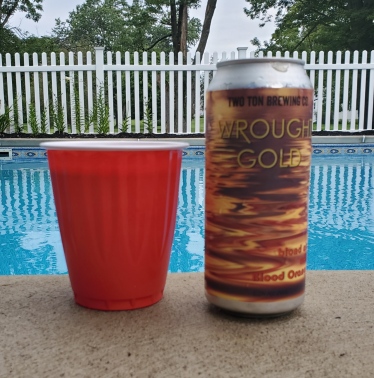 Wrought Gold w/Blood Orange is an excellent ale that works perfectly as a fun, summer refresher and well worth seeking out.