“A delicious, decadent dessert stout from one of NJ’s classic craft breweries.” 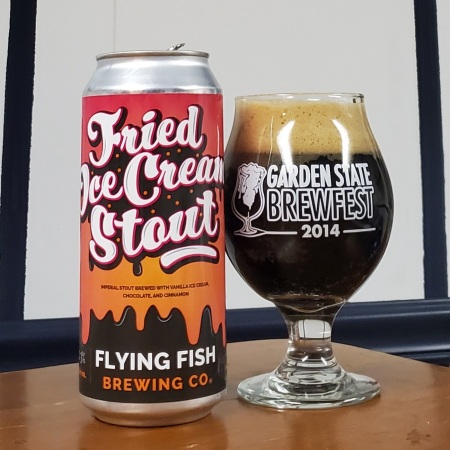 From the description Flying Fish’s page for the beer:

Imperial stout and fried ice cream flavors together….Why not indulge in two great things at once? This rich and complex stout provides ample aromas of roasted malt and vanilla, then gets paired with real vanilla ice cream, flavors of cinnamon, and dark chocolate to produce a truly unique treat.

It has been about two and a half years since I reviewed a beer from the venerable Flying Fish Brewing Company, one NJ’s first craft breweries and the largest in the State.  Flying Fish is continuing to brew interesting beers in a wide range of styles and they’ve been updating their look over the last couple of years to be more modern. To that point, today’s beer, Fried Ice Cream Stout, was originally brewed and canned by Flying Fish about two years ago for the first time as a limited release but  the popularity of the decadent dessert stout pushed it into an annual winter release.

Fried Ice Cream…a dessert I remember enjoying at the old Mexican chain restaurant, Chi Chi’s and dessert that is apparently popular in Philadelphia (Flying Fish is just over the bridge from the greater Philadelphia metropolitan area). A fascinating desert which is a ball of ice cream quick fried in a crusty topping that may include crushed cereal, cinnamon, sugar, cinnamon sugar, maybe some chocolate syrup and if you were a good kid and ate all your dinner, a cherry on top. The brewers at Flying Fish sought to emulate that decadent dessert in beer form. Spoiler alert: they succeeded. Read on for my thoughts on how I think they succeeded.

So what do we have in the glass? A very dark, black beer that pours with a substantial, spongy-looking head. I could be convinced that there’s a dark red/crimson tint around the glass where the fluffy head meets the glass. Maybe that’s from the cinnamon? Regardless, everything about this beer form a visual perspective is that of an appealing Imperial Stout.

The beer passes the first sip test, a blend of intriguing flavors that makes me want to have more. As I enjoy the beer over the course of about an hour or so, the flavors noted on the description emerge more prominently. There’s a creaminess to the beer that likely comes from the ice cream, obviously. Some vanilla, which is really nice and welcoming. A bit of cinnamon comes through, although I wouldn’t mind if the cinnamon was more prominent. On the finish, there’s that bittersweet chocolate along with the roasted malts, emulating the hot fudge topping.

As I pointed out, with this beer clocking in at 10.3% ABV, I took my time and was rewarded. The flavors were present when the beer was just out of the can, but they became more assertive as the beer warmed slightly with perhaps the chocolate standing out the most. The creamy feel of the beer is present the whole time, truly giving this beer the overall feel of “ice cream as beer” or “ice cream in beer form.” It just works for me.

I couldn’t tell you when I last enjoyed some Fried Ice Cream, it was probably 20-30 years ago so I can’t exactly compare what the beer is doing compared to my memories of that decadent dessert. What I can say is this: Flying Fish’s Fried Ice Cream Stout is a lovely stout that is a masterful blend of multiple flavors that complement each other rather than muddle each other.

Fried Ice Cream Stout is a delicious Imperial Stout that makes for a perfect dessert. It is also a beer that proves Flying Fish is still very much a brewery worth enjoying and brewing beer worth finding.