This relatively underappreciated style is a standout of its kind and one of the best beers to come out of Flemington’s Lone Eagle Brewing. 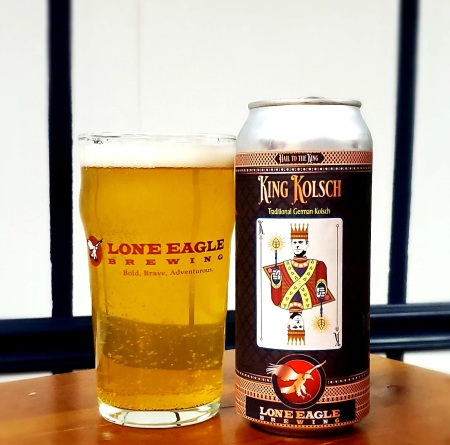 From the untappd page for the beer and can label:

This classic German ale is much like a nice crisp lager. A personal passion of our brewer, it has a nice malty sweetness to it while finishing with a slight bitterness. This Kölsch is true royalty. Long live King Kölsch!

Lone Eagle is one of a small handful of breweries within a 10 mile or so radius of me. As such (and as I’ve noted previously here at the Tap Takeover), I had been visiting them on again and off again for the monthly Board Game Night, both for gaming with friends and the beer. Of course, since March 2020 that hasn’t happened. When I saw that Lone Eagle was canning their re-worked Kölsch, I figured it was finally time I grabbed some of their beer.

In the few Kölsch reviews I’ve posted, I’ve mentioned how the style is underappreciated, it isn’t an IPA, Stout, or even a Pilsner. However, if brewed well, a Kölsch can be very flavorful, refreshing, and satisfying. Those last three words encapsulate this beer, but read below for more…

The beer pours a clear, bright yellow into the Lone Eagle nonic tumbler which really catches my attention. An image just like the one at the top of this post is likely what many people will conjure in their minds if somebody asks them to picture “beer.”

I’m hit with a very clean tasting beer. What does that mean? Well, there’s a consistency to the flavor profile, good contribution from the water, yeast, barley, and hops. The core four ingredients are playing in harmony. There’s zero unpleasant taste on the finish or aftertaste, nothing lingers uninvited. Rather, the taste here with King Kölsch finishes in a way that makes me not want to put the glass down.

There’s great flavor from the malt, a little breadiness that reminds me of a Helles Lager. The beer also has a sweetness to it that makes you want to go for a second sip without having put the glass down from the first sip. Kölsch ales can have a bitterness on the finish, but this one doesn’t. While the hops are definitely present, but there’s no lingering unpleasantness.

I’ve had nearly 50 different beers from Lone Eagle over the last few years, so I wasn’t sure what to expect since I’d characterize them as “a very nice brewery.” While I’ve enjoyed the majority of their beer, only a few of their darker beers (Stouts and Dopplebocks) have stood above the crowd of their peers in an otherworldly sense. Again, not a knock necessarily because I’ve been more than pleased with what I’ve had – I wouldn’t have had almost 50 beers from Lone Eagle if they weren’t good.

However, this Kölsch is one of the best 3 or 4 best beers I’ve had from Lone Eagle Brewing. To put it simply, King Kölsch is a beer worthy of the title because it is a standout beer for a style that (unjustifiably) is not always a standout and a standout beer from a brewery who has been churning out good beer for about four years now.

My “Brewery Spotlight” on Lone Eagle Brewing from June 2017. (Three Years ago already!)