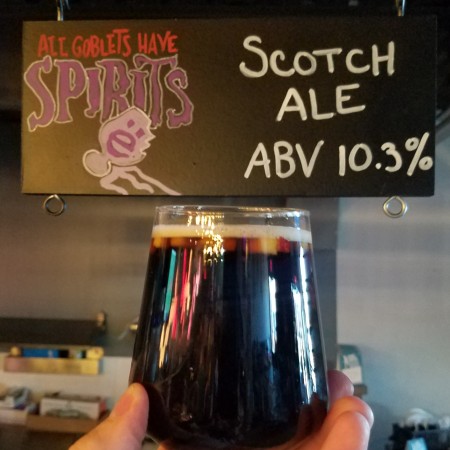 The floaties are slices of apples, a nice touch from the fine folks of Broken Goblet.

From Broken Goblet’s landing page for the beer:

Scotch Ales are not the most prevalent style of beer in the American beer landscape. Sure a decent number of breweries have at last one in their portfolio, but they aren’t the juicy hop bombs which often comprise at least half to two thirds of a bar or taproom’s beer list.  The style is very malty, often sweet, and can be in the 7 to 10 ABV% range. They are somewhere on the Barleywine and Imperial Stout spectrum of ales, minus the hoppiness. Scotch Ales lend themselves to some flavor adjuncts or barrel aging, too. In the case of Broken Goblet’s All Goblets Have Spirits, their Scotch ale is brewed with Maple Syrup and Gala Apples. If that doesn’t say fall beer, I don’t know what does.

As has become tradition around my birthday in November, my wife takes me and a few people on a tour of multiple breweries. This year’s tour featured breweries along the Bucks County Ale Trail, which is pretty convenient since I’m about a half hour from the PA border and included a stop at Broken Goblet. I usually don’t go for the prevalent styles on these brewery visits, styles like IPAs and Stouts, so seeing this beer up on the menu board for the day was very pleasing as I enjoy a good Scotch Ale.

However, I wasn’t prepared for what this beer turned out to be.

I was confused when the beer was handed to me, little objects were floating in the beer. The aroma; however, was delicious. A glorious smell with hints of maple that I could have spent an hour breathing in. I realized those little objects were slivers of apple, which per the above description, are part of the brewing process along with maple syrup. I wasn’t initially aware that the apples and maple syrup were used in the brewing process, the menu board doesn’t indicate that to be the case. It was an extremely pleasant surprise, I must admit.

It is really difficult to get past the potency of the maple in this beer, but that isn’t a bad thing. I still get the malts that gives the Scotch Ale it’s primary flavors, however. I’ve had a few beers that used maple syrup as part of the brewing process, some have been good, a few have turned sour (CBS), but in almost all of them the maple is omnipresent and a fine complement to the beer itself. There’s a strong hint of caramel to this beer, along with perhaps toffee too. I’m reminded of Sierra Nevada’s Maple Scotch Ale, but a little boozier. I don’t know if I’d get the apple flavor as much as I would if there weren’t pieces of apples floating at the top of the beer.  I really liked the touch of the apples in the beer. This from a guy who doesn’t appreciate an orange being added to my glass of Hefeweizen or Witbier.

All Goblets Have Spirits is a very interesting, fun beer. The crispness of the apples likely helps to balance the very potent sweetness from the maple syrup and caramelly malts for the beer. This is a beer to enjoy on a cold fall or winter night by the fire. A beer to consider and enjoy while perhaps watching a movie or curling up with a great immersive novel.

We visited five breweries (and had dinner at a favorate restaurant with a fantastic tap list) that day and All Goblets Have Spirits was, unquestionably my favorite beer of the day. It is the kind of beer to experience. It was also pleased to run into the guys behind Breweries in PA during our visit. We chatted only briefly, I think they were partaking in a tour of the Bucks County Ale Trail, too.

Summing it up, Broken Goblet is a fun brewery and All Goblets Have Spirits is a very good beer.

Wee Bit of the Scotch (Level 4)

Whether it’s a Scotch Ale, Scottish Ale, or a traditional Wee Heavy, don your kilt and prepare yourself for a wee bit of Scotch. 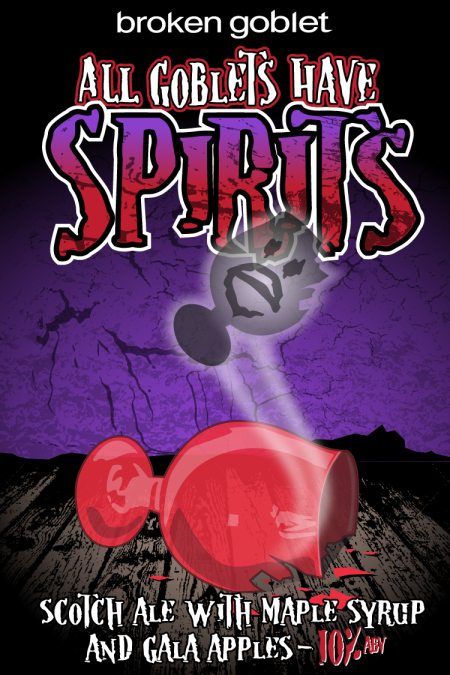