A huge stout that is a near perfect blend of sweet and spicy. An ideal dessert stout to enjoy on a cold night. 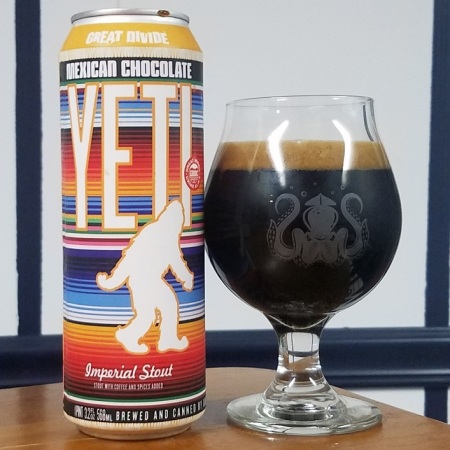 From the side of the Great Divde’s Landing page for the beer:

A very special, and very limited, entry in our venerable Yeti Series, Mexican Chocolate Yeti is a sensory delight. We’ve added a variety of spices, vanilla and coffee to Yeti Imperial Stout to create our version of a traditional champurrado drink. Spiced chocolate drinks have been part of Aztec and Mayan cuisine and culture for centuries, but they have yet to be paired with a Yeti! 9.5% ABV.

Great Divide is one of the big, reputable breweries based in Colorado. Founded in 1994, the brewery Brian Dunn started has won several awards for their beer, including their iconic Imperial Stout, Yeti. Over the years, Great Divide has brewed several variants of the Yeti, including this spicy, sweet Mexican Chocolate version.

Great Divide distributes mainly in cans, so for this specialty stout, they packaged it in a “Stovepipe” can of 19.2 oz.  I like this size and prefer it to the once ubiquitous 22oz bombers that seem to have slipped out brewer’s fancy, the 19.2oz is just enough of a beer to enjoy by oneself. As for the liquid in this particular can, I’ve had the flagship Yeti a couple of times, the first time I thought it was just OK, but when I was on a business trip in Denver, Colorado and attending a networking event at Great Divide’s Barrel Bar and I had Yeti again, I liked it much more. So, when this specific variant was announced, combined with the fact that I like the spicy/chocolatey stouts, I knew I had to get it.

After the pop of the can, I pour the beer into the glass and it is a very deep black, just like an Imperial Stout should pour. Some pleasant aromas arise from the glass, a little bit of maybe cinnamon, definitely some chocolate and vanilla. Smells to me like this will make a fine dessert beer.

I’m hit with delicious stout flavors, but then the adjuncts take over. This is a feature, not a bug. The aroma, unsurprisingly, pointed the way to a degree. I get strong flavors of chocolate, more than the vanilla nose led me to believe. Again, not a bad thing, but the vanilla is there and in just the appropriate dose for me. Vanilla can often be overused in beers, particularly big stouts, but not here.

Mexican Chocolate Yeti finishes with a little bit of coffee and some of that spice I caught on the aroma. I’m guessing some cinnamon, definitely. Not sure what else, but probably some kind of pepper. What surprises me is a few flavor bursts of something fruity. Not sure what, maybe a slight hit of cherry? Maybe citrus? Whatever that fruit is, it blends extremely well with all the other flavors. …and of course the beer tastes better as it warms in the glass, allowing the flavors to really breathe, but that should be taken for granted by now for dark beers of a high ABV.

Great Divide’s Mexican Chocolate Yeti is more than full flavored stout, it is a beer to savor and experience. If you like Stone’s Xocoveza stout as much as I do, you’ll likely enjoy this one. It also reminded me a little of a local favorite, Conclave Brewing’s Mexican Morning Stout. Believe in the Yeti, especially this incarnation