An extremely interesting beer with a balance of complementary flavors. 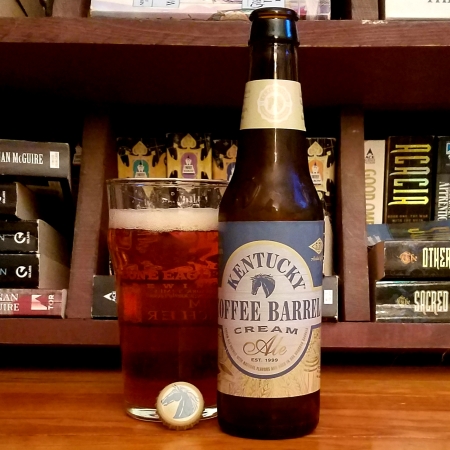 From Lexington Brewing & Distilling Company’s page for the beer:

The brewers at Lexington Brewing Co. took a traditional cold-conditioned cream ale brewed with flaked corn and added our own Haitian coffee to the mix. After resting in fresh bourbon barrels from some of Kentucky’s premier distillers, Kentucky Coffee Barrel Cream Ale becomes a sessionable beer packed with flavor. Big, bold notes of coffee on the nose and palate give way to a smooth finish of bourbon grains and oak. Subtle notes of vanilla and caramel complement this beer from time spent in the barrel.

Some might say the “Cream Ale” is one of the few wholly American created styles of beer, a light, easy drinking style that has some lager characteristics. Generally, Cream Ales can be sweet and refreshing. Personally, I haven’t had very many Cream Ales (most are the Coffee variants from Carton Brewing), but I find the style fairly tasty. In other words, yet another style for me to explore, oh the horror!

As for this Cream Ale from Lexington Brewing it is a very interesting beer. When I did one of my regular beer swaps with my Dad, this beer really intrigued me. From what I’ve gathered, all the beers produced by Lexington Brewing are barrel-aged and they brew across multiple styles.

The beer looks golden with some slight amber hints, but the wood floor where the beer is placed in the photo above is probably reflecting in the beer. Additionally, I’m guessing those reddish/amber hints are from the coffee and aging in bourbon barrels. There’s definitely a coffee aroma wafting off the beer, a welcoming aroma.

I get an immediate hit of coffee intermingled with the beer, which makes for an impressively complex initiation into the beer. Lots of coffee throughout the beer, but it isn’t extremely dominant. Complementing the coffee is the sweetness the bourbon barrel aging lends to the beer. Since a Cream Ale is made with more corn than most beers, there’s a natural sweetness to the style. Coffee is a naturally bitter flavoring component, so the two elements can potentially work against each other but actually balance each other, while the bourbon barrel characteristics brings it all together.

There’s a slight bitterness at the end that was a slightly counter to the sweetness I was getting from most of the beer. That might be the only slightly negative element of the beer.

Aside from the complex flavors, what I appreciate most about the beer is the alcohol level – 5.5% ABV where most barrel aged beers are closer to 10%. I’ve only had a few beers from barrels that were even below 7%. Lexington’s ability to coax as much barrel sweetness into the beer, while also maintaining both the beer’s original flavor and the coffee hints while keeping this beer at a lower, “sessionable” ABV is very impressive.

Hard not to compare a Coffee Cream Ale to Carton’s Regular Coffee especially as I live in New Jersey, but I’ll just say even though the styles are the same, they are different beers completely. Lexington’s Kentucky Coffee Barrel Cream Ale is flavorful and worth a try.

Link to Untappd 4-Bottle Cap rating, – a push from 3.75 to 4 for the interesting nature of the beer.