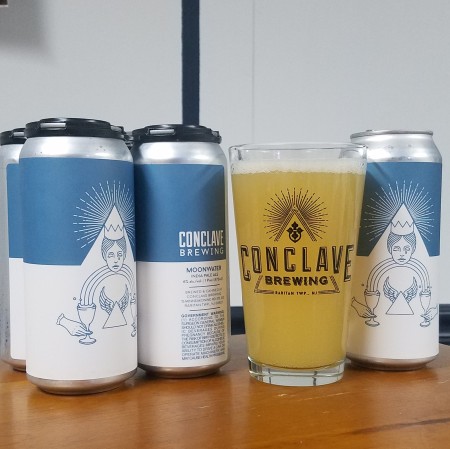 An IPA brewed to be simple, enjoyable and drinkable. We used a blend of base malts, Mosaic and Motueka hops and then a blend of ale yeasts to make this one. While it’s clearly a hoppy one, it’s crisp minerality and finish is what we’re really psyched about. Come on by and let us know what you feel. Notes of Sauvignon blanc, grape bubblegum, lemongrass and lime.

For all the mentions Conclave gets here on the Tap Takeover, this is the first full review I’m doing for one of their beers since fall 2017. For about the past year or so, Conclave has been doing somewhat monthly releases. Moonwater was was the first can release I was able to get I’m very glad I did.

Immediately noticeable from the pour of the beer is how yellow-orange the beer is, really nailing the “Pale” of the IPA. It looks almost like orange juice, like many of the popular Hazy IPAs. There’s a strong hop aroma that, for IPA lovers, really encourages you to take a sip.

A big hit of hops on the first sip. Per the description above, they’ve used two hops: Motueka and Mosaic.  The Motueka on the start which evokes a really delicious citrus flavor. I think Conclave has used Motueka in quite a few of their beers and it is a really flavorful hop, I’m a fan. The hop I tend not to enjoy; however, is the Mosaic hop. For whatever reason, the finish of beers which feature the Mosaic hop don’t typically jive with my taste sensibilities. I didn’t notice those issues in this beer.

While the Mosaic is present and has some hop qualities I enjoy, the Motueka hop brings enough of its own flavor to give the beer a more balanced hop profile. Motueka is one of the New Zealand hops that is growing in popularity and this beer is a nice showcase as to why. There’s an extremely pleasant tropical fruit element to the beer that inspires you to have more.

So the beer has a well-crafted balance between the two hops, which is nice. Also impressive is how flavorful the beer is with a relatively low ABV at 6%. For an IPA, that’s not exactly a chugger, but lower than the 7-7.5% you’d expect from an IPA with the robust flavor this beer gives.

Conclave Brewing is extremely consistent with every beer they produce and this beer is further proof. Moonwater is a great example of the care, precision, and artistry that can come together in an IPA. Plan and simple, Moonwater is a delicious IPA.

The cans sold out early on Saturday, the brewery is open for a couple of hours on Thursday and Friday evening and Saturday afternoons. I wouldn’t be surprised to see another batch of this beer become available though maybe just for growler fills. If you’re in the Central New Jersey area, it is a beer (and brewery) worth seeking out and visiting.

Can art by Natalie Rengan, @talliedesign. Natalie has been creating some really striking designs for Conclave’s can releases, giving a nice “branding” to the brewery.