A world class beer, a beer that gave birth to a style. 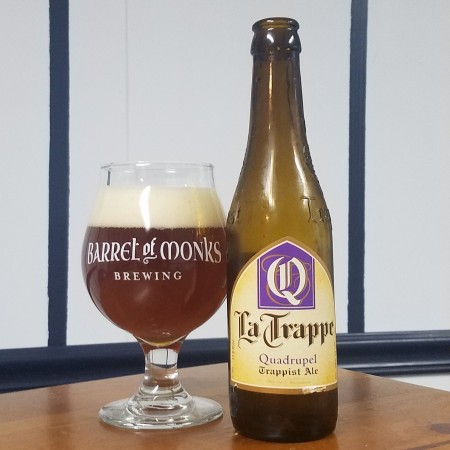 From La Trappe’s page for the beer page:

In 1991, The Koningshoeven brewery baptized her beloved Quadrupel under the approving glance of the monks. A closely guarded recipe became reality, and the first Quadrupel beer in the world was born.

Aroma: Hints of cloves and nuts, balanced by the sweet aromas of vanilla, raisins and banana.

Taste: La Trappe Quadrupel is the heaviest ale of La Trappe Trappist ales and is eponymous of this ale style. A full, warming and intensive taste. Malty with the sweet tones of date and caramel.

Trappist Ales…perhaps the rarest of breweries in the world. To wit, Brouwerij de Koningshoeven is one of 14 Abbeys officially designated as Trappist breweries in the world and one of two in the Netherlands. I’ve had a handful of ales from Trappist breweries and I think this is the best of the handful I’ve had. Granted, I haven’t had the legendary and highly sought after Westvleteren 12. That said, I realize it has only been about a month since I last reviewed a Belgian Quadrupel, so that alone should be an indicator of just what an amazing beer La Trappe Quadrupel is.

As always, the look and aroma is where we begin. The beer pours a deep brownish-amber-copper. The aroma is typical of a Belgian Quadrupel – some earthiness, some vanilla, maybe even some almond/amaretto. I can smell the sweetness in the beer. Outside of some barrel aged beers, I usually don’t smell the sweetness quite as potently.

That first sip is filled with flavor, lots of sugary goodness like caramelized banana, maybe some stone fruits like figs or even warmed cherries. The finish isn’t quite as yeasty as some other Quadrupels I’ve had (I’m thinking the classic Abt 12 from Saint Bernardus) which sets this beer slightly apart from other Quadrupels but not in an unwelcome fashion.

I also get a smoother finish on the whole with La Trappe’s Quadrupel, compared to most other Quadrupels I’ve enjoyed. There’s a bit more booziness, I taste the alcohol just a bit more in this one than other Quads, from what I can recall. It has the smooth finish of what I’d expect from a barrel-aged beer, but without the barrel-aged flavor. Again, (to borrow a tech term), this is a feature and not a bug for me. This is a boozy, sweet, potent, flavor-filled beer that is big in every good way.

This is an outstanding, world-class beer that really is in a class its own. I’d say it would be a great interpretation of the style but as I recently discovered, La Trappe’s Quadrupel was the first beer with the Quadrupel name when it was first brewed back in 1991. So it is the style-namer or “Ur-Quadrupel,” if you will. I know, considering the great brewing tradition in  of Belgian styles, I thought the style was a bit older than that.

I may say this with frequency, but it is perhaps truer for this beer than any other beer I’ve mentioned or reviewed – La Trappe’s Quadrupel is an absolute must try.

Additional reading on this beer and Quadrupels: