The Mount Holly area is home a decent number of independent breweries that have gained a solid reputation over the past half decade or so. Forgotten Boardwalk is near Mount Holly, the great Pennsylvania brewery Neshaminy Creek Brewing Company is just across the river, Spellbound Brewing is in Mount Holly as is today’s featured brewery, Village Idiot Brewing Company.

Located in downtown Mount Holly, NJ, the brewery has been around since 2013. Sadly, in 2015 one of the owners, Rich Palmay, passed away. But the brewery forged ahead. In 2018, Village Idiot received a Silver Medal at the Great American Beer Festival for their Belgian-Style Tripel. In other words, some ups and downs over the course of the brewery’s lifetime.

Village Idiot may seem like a random name to give a brewery (and a pretty good one that conjures up the great “mascot” for the brewery), but there is a meaning to the name. When Vincent Masciandaro and Rich Palmay went to the bank for the loan required to start the brewery, they had the date wrong and were a week late. Vince said they were village idiots and the name stuck. As I said, a good name that pops on the sign hanging outside the brewery. That alone draws the casual customer to the door.

The story may be familiar: two home-brewing friends made well-received beer and when the NJ laws changed in 2012, they thought to open a brewery. So with that, Village Idiot was among the first wave of breweries to open once those laws changed. Located in a former pub, you really couldn’t ask for a better location: the Historic Downtown of Mount Holly, NJ.

Before going on a six-brewery tour on a grey Saturday in November, I didn’t know too much about Village Idiot Brewing other than the name and where they were vaguely located. I also recalled that NJ food writer Pete Genovese had good things to say about them. Beyond that, just that they were in a region with a growing number of independent breweries. As I said, Village Idiot Brewing has a great location, but the former pub also provides a great atmosphere. It feels like a neighborhood bar and an added level of that comfort and welcoming sense is a a pair of couches near the back of the pub.

The bartenders were very personable and there was a decent sized crowd for the middle of the day. Unfortunately, I made things a little difficult for the guys behind the bar when I forgot about a step and spilled my flight. Vince was behind the bar and helped to get my flight refilled (at no charge!) despite the relatively crowded bar.

So, how did the beer taste?

At Village Idiot, you can get a flight of six beers in a small baking tray. Knowing very little about their output, I think, made for a better flight for me and gave me reason to try styles I might not have otherwise tried.

Yes, I realize this is a blurry photo. But if nothing else, it shows off the fact that Village Idiot typically has 14 beers available.

The first beer was a style I don’t see often and haven’t had very much, a Rye beer. Specifically, “Rich’s Revolutionary Rye.” I only realized as I was learning more about the brewery in preparation for this post that this beer is made in honor/homage of the late Rich Palmay. This was a great start to the flight and I really liked the flavor of the Rye grain in the beer. I’d consider this a good “every day beer” even though the ABV of 6.1% is slightly higher than a typical “every day beer.” 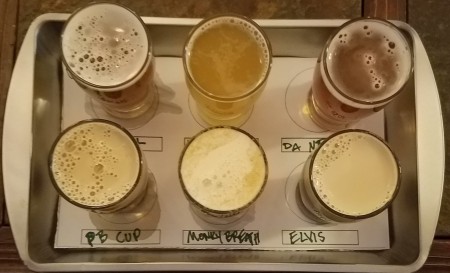 Not exactly the most stable way to carry a flight of beers, but six is a great number.

The second beer is another “homage” beer – “Wentzstefaner” a portmanteau of Philadelphia Eagles quarterback Carson Wentz and the great Weihenstaphaner brewery. The beer is a Hefeweizen (or Hefe Weissbier as Weihenstephan calls their wheat ale) and is pretty good.

Third up was another Rye Beer. I don’t think many breweries have multiple Rye beers on tap simultaneously, but Village Idiot did on the day I visited. That was a good thing because “Da Nick” is another tasty beer. As I said in my untappd comment, I think I’m starting to like Rye beers and this Rye IPA (as the brewery calls it) was a welcome taster.

Then the second half of the flight started, and these were sweet beers including the “Peanut Butter Cup – Chocolate Porter.” I tasted copious amounts of peanut better in this beer with some chocolate. A little too sweet for me, but I imagine for those who like the style, it would work really well. In fact, my brother-in-law, who was part of our group on that day, loved it and his favorite beer is probably the most famous peanut butter chocolate beer, DuClaw’s Sweet Baby Jesus. 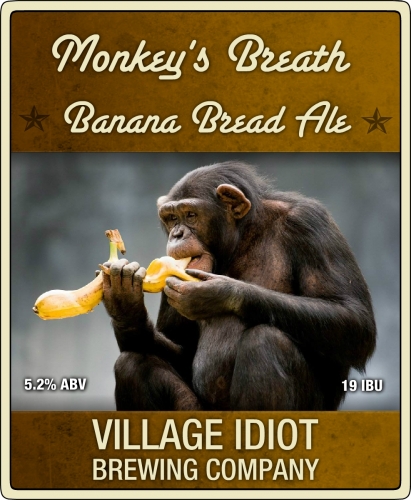 Next up is the beer that was the best I had at Village Idiot and one of the best of the day for me (I had about 2 dozen tasters that day visiting 6 breweries) – “Monkey’s Breath – Banana Bread Ale.” If you told me before that day that one of the best beers I’d be drinking that day would be a banana bread beer, I don’t think I would have believed you. But goddamn this beer is delicious. What elevates the beer experience is how Village Idiot rims the glass with cinnamon sugar. The beer is delicious on its own, don’t get me wrong. But that little extra (literal) spice really makes this beer a full experience. I could definitely see myself filling a growler with this beer or having it again.

The final beer of the flight of six was another dessert beer: “Elvis is in the Building.” This beer was like combining the other two “dessert” beers with elements of chocolate covered bananas and peanut butter. This was on nitro, so the fluffiness from the nitro added to the dessert feel of the beer. After having this beer, I’ve come to the realization that I nitro beers aren’t my thing. I don’t think the beer was bad, but the fluffiness, high level of sweetness, and the fact that I had two sweet beers just before this one contributed to this one not working for me.  Again, I don’t think it was necessarily a bad beer, it just didn’t work for me. The crew I was with that day; however, really liked “Elvis is in the Building.”

Village Idiot was in the middle of the brewery tour that day, I only knew a little bit about them before arriving at their door, but I found myself really liking the experience of the brewery and the beers. The atmosphere is super relaxed, has a bar area as well as a couple of couches where a group of people can relax and play board games. Like many breweries in New Jersey, food cannot be made and served, but can be brought into the brewery from elsewhere; like the pizzeria across the street.

Village Idiot is definitely worth the visit: well-above average beer, great atmosphere, solid location, and good people. Not too many breweries can boast a Fruit Beer as their best beer (from our group and what I’ve seen elsewhere about the brewery) which also makes this a standout brewery. Well, that’s not the only reason to visit because all their beers are quite good. About the only real criticism is that their beer labels could use a little work. I think the best thing I can say about them is that were Village Idiot a little closer, I would find myself visiting more often and filling growlers as regularly as I do for the breweries in my immediate area.

Some other links of interest: