CARAMEL MACCHIATO PORTER
Your favorite espresso beverage has now become your favorite adult beverage! Brewed with American barley, caramel and chocolate malt, and a touch of dark wheat. Gently hopped with American and German hops, and then infused with caramel and locally roasted La Colombe coffee. Full-bodied, smooth and robust, with notes of sweet caramel, mocha, and chocolate.

Evil Genius is one of a plethora of fine breweries out of the Philadelphia, Pennsylvania region. Although some may know the brewery from the uniquely named brews, the beers I’ve had have been quite good. After all, the beer names can draw the attention, but the flavor and taste keep you drinking.

As I poured the black beer into my glass, I caught sweet aromas of caramel. Evil Genius calls this a “Caramel Macchiato Porter” and it smells just like that. First sip is a big hit of that caramel, but enough of the porter characteristics are present, too.

This beer is extremely sweet as the caramel is the most prominent flavor component with very little of the coffee flavors coming through initially. After the first few sips of the beer, as the beer warmed to room temperature, the caramel power settled down. Although still definitely present, coffee flavors started to rise. It was then that the porter characteristics of the beer also began to assert themselves, with a slightly roasted finish flavoring the backend of the beer.

I can get why the sweetness of the caramel and cocoa in this beer might be too cloying for some. If you don’t like caramel, obviously stay away from the beer. For my tastes; however, the caramel notes were just enough. If you like dark beers like porters and stouts that include coffee in the brewing process or evoke the taste and feel of coffee, you’d probably like this one.

More caramel than coffee, but definitely a uniquely flavored porter, New Phone Who Dis? is a tasty dessert beer that won’t knock you over the head too strongly with the sweetness. For me, one was enough at the time I drank it, but I would return to this beer after a slice of rich chocolate cake to polish off the evening. This beer is continuing proof that Evil Genius’s experimentationial brews live up to their wacky names, which is a nice thing indeed. 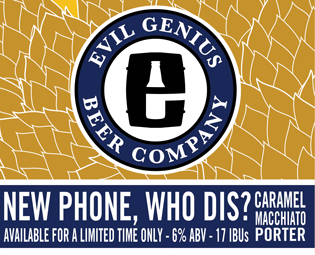 Recommended, link to Untappd 3.75-star rating, a beer I liked enough to try and buy again. I can see myself enjoying this one more on a second try at a later date, too.