The first new beer of the month was Smuttynose’s Summer IPA, a beer that surprised me. A refreshing, low-hopped IPA that had a nice citrus flavor component. I picked up a single can but if it returns to shelves in summer 2018, then I’ll likely get a full six pack at the least. 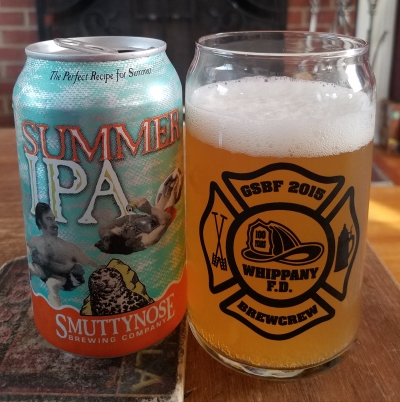 One of my favorite breweries, Victory, launched a new beer recently. A beer they are positioning as an every-day beer and I think that goal was achieved with Home Grown New American Lager. Low in ABV with a refreshing hop component, this is a crisp, tasty Lager that has some elements of citrus in the hops. I liked the single bottle my friend brought over enough to pick up a full six pack to share with friends while we sat poolside later in the month. I shouldn’t be surprised by how much I enjoyed the beer largely because the big red “V” on the label. 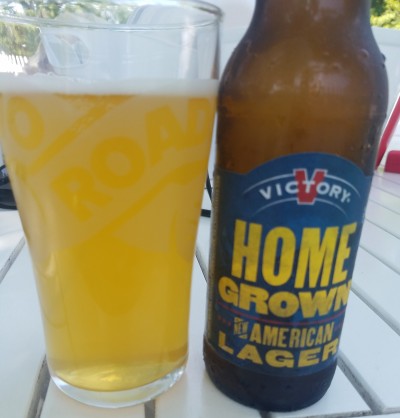 Von Trapp (yes, that Von Trapp family) has been brewing beer since 2010 and their bottled beer has recently been distributed in NJ. I tried the Bohemian Pilsner and thought it to be a good representation of the style. I may have to try some of the other Von Trapp styles, too. For the first time in a while, or since joining untappd, I had a bottle of Ommegang’s Three Philosphers, a wonderful, rich Belgian Quad. It is easy to know why, after drinking this beer, why the beer has such a great reputation. This is a big beer at over 9% ABV so it should be enjoyed slowly. 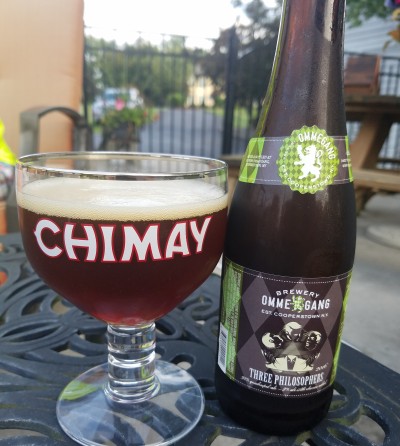 I covered in detail what I had during my first visit of the month to Flounder, the Dinkelweiss was definitely the highlight. Such a fantastic interpretation of the light style. On my second visit, I had the Dinkelweiss again, but with Raspberry syrup and it was just as good as it was with the Elderflower. I also tried the Milkshake Genevieve IPA on a later visit in the month, which was delicious. The addition of lactose really calmed down the hops in the beer. That weekend, my neighbor brought over a six pack of Tröegs HopBack Amber Ale, a Red Ale with a nice malt/hop balance. Of the dozen or so brews I’ve had from the Trogner brothers, I can only think of 1 that didn’t quite do it for me.

As has become clear by now, I love Bavarian Hefeweizens especially those brewed in Germany by a German brewery. I’ve seen Andechs Weissbier Hell at my local beer shop for years and finally picked up a 500mL bottle, I was very pleased, as I have been by the 3 or 4 other brews I’ve had from Andechs. This was a great interpretation of the style. I just wish more German breweries would distribute their beer in 6-packs rather than big 500mL bottles. 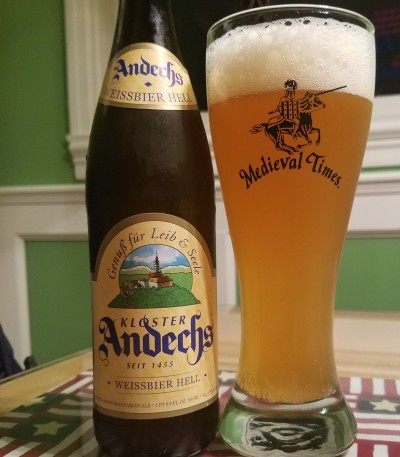 In a proper, large Hefeweizen glass

Every year, at least one day in the summer, my wife, brother-in-law, and whomever else can join take a day trip down to Long Beach Island an go to The Chicken or the Egg (Chegg’s) for wings and other great food. This year, I skipped the wings and went for Cinnamon Bun French Toast, which is just as decadent and delicious as you might guess. Last year, we added a stop at the then newly opened Ship Bottom brewery to the itinerary. When we visited the brewery last year, they were open for only about a week and only had one beer remaining from their launch party. This year, their brewery was a year older, there was a relatively lively atmosphere for the middle of the day, and many more beers were on tap. I had a flight including their Beach Patrol Hefeweizen (the best of the bunch), the Blueberry Bikini Bottom Wheat (which reminded me of Leinenkugel’s Sunset Wheat as both beers reminded me of Fruity Pebbles), the Barnegat Lager (a red lager) and NYD 2017, a Russian Imperial Stout. A decent group of beers, I’d definitely go for the Hefeweizen again. NYD 2017 was a solid Russian Imperial, too, though more bitter than I like. 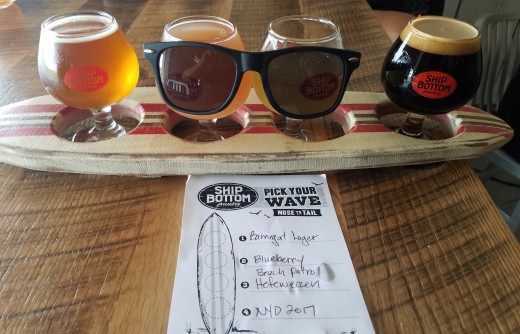 The Sunday ritual of Game of Thrones and a big beer continued with the last two episodes of the season. One of which will get a full review next week, the other was Westbrook’s 6th Anniversary Hazelnut Chocolate Imperial Stout which was delicious. This beer has a lot of flavors that balance and complement each other very well, not surprising since Chocolate and Hazelnut typically work well together. In the beer, they are almost one flavor and they mask the high 10% ABV nicely. This was a great beer.

I stopped at a local bar (The Royal) on the last Friday of August with a friend and was pleasantly surprised to find Tröegs, Founders, Three 3’s, and Conclave on taps alongside the typical “local watering hole/neighborhood bar” staples. I had a Three 3’s S.S. Tide Pool, a crushable delicious session IPA and a Conclave Gravitational Pull, which blew me away. Such a juice-bomb of an IPA, the bitterness was balanced perfectly with the juiciness of the fruit evocation. This is an IPA I would drink again and again. Conclave is close enough to my house that I need to head down there again as it has been far too long since I stopped in for a growler and the requisite 4oz pour of Mexican Morning.

The last beer to make it into this post is Dogfish Head’s Oak-Aged Vanilla World Wide Stout, but I’ll have more about that beer on Tuesday September 5 for my next beer review.