I can only guess at the reasons why this rich, classic style gets overlooked. One of those is the prevalence of Hop-forward beers in the US craft beer market place, you know, the ever present IPA and all the derivations of the style. Similarly, the popularity and abundance of stouts and their various styles may draw drinkers who prefer darker beers away from Dunkelweizens.

But back to the Dunkelweizen…a wonderful, yeasty, bready, clovey beer which is a dark cousin of the classic Hefeweizen. If Hefeweizen is a beer that can be associated with summer, then Dunkelweizen may be an early fall beer or late spring beer. Days when the warmth is comfortable enough to don shorts or cool enough to go long pantsed, evenings cool enough to throw a hooded sweatshirt on while still wearing your shorts from the day.

While the low hop bitterness of the style is likely one reason, another is that not that many American breweries make Dunkelweizens. Neshaminy Creek in Pennsylvania brews one annually (Dunks Ferry Dunkelweizen) as a fall seasonal, Samuel Adams occasionally releases a dunkelweizen, and Shiner brews one around Christmas. I’d suspect the smaller breweries that lean more towards traditional German brewing styles would be brewing a Dunk on occasion.

Three microbreweries I’ve visited in New Jersey brew Dunkelweizens regularly: Demented in Middlesex brews a Dunkelweizen (Der Wolf) as a fall seasonal. I had it in a flight not long after Demented opened its doors so I’d like to revisit it again. Jughandle brewed one in their first year, which was pretty good. Ramstein / High Point Brewing, one of the stalwarts, or “five O.G. New Jersey craft breweries,” has a Dunkelweizen (or Dunkel Hefe-weizen as they call it) as part of its regular line up of beers. This makes sense considering the Germanic foundation of the brewery. I really need to get up to that brewery and sample all of their beers, I’ve only had the Hefeweizen and liked it a lot.

One anecdotal indication of the lack of Dunkelweizens in the beer market is doing a quick Google search of “Dunkelweizen.” The search returns more results that pertain to home-brewing Dunkelweizens than breweries who brew Dunkelweizen.

Another guess is that perhaps one of the issues with a lack of Dunkelweizens is the delicate brewing process? I recall picking up a six pack almost two years ago and the beer was skunked, it tasted more like a sour beer than a Dunkelweizen. A little googling at the time returned some results that the process can allow for souring if not monitored properly. That having been said, I would think any brewery making a Hefeweizen would (or maybe even should?) brew up a Dunkelweizen for their line-up.

As for some of the better Dunkelweizens I’ve had, unfortunately, I’ve only had a small handful of Dunkelweizens although I would most definitely welcome more on the market and in my refrigerator. As I sad last week, the wheat base and clovey/banana-y flavor profile hits my taste-buds so well. One of the best Dunkelweizens I had was from the venerable German brewer who brews only wheat beers, Erdinger. About a year ago, my wife and I went to one of our favorite restaurants going back to our Rutgers University days, Stuff Yer Face. To my pleasant surprise they had Erdinger Dunkel on tap and it was delicious. It had been a few years since I went there and I was was pleased with impressive beer menu. Since going there with my wife, and I returned recently again in part because of that beer menu. But I digress. Erdinger’s take on the style was probably the best Dunkelweizen I’ve had in years, or at least since joining Untappd. Of course, the classic German brewery Weihenstephaner makes a great Dunkelweizen, which was just about as good as Erdinger’s. I think the main difference is how fresh the Erdinger was since I had it on draught.

Another great and more recent Dunkelweizen I enjoyed was the “Dunkle Weisse” from Sierra Nevada’s Beer Camp Across the World variety pack this year.  This was a collaboration between Sierra Nevada and the great German Brewery, Ayinger. 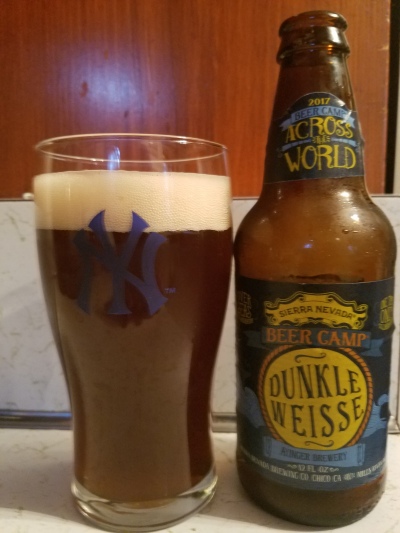 Who knows. Only a few years ago even some of the more vocal and “experienced” craft beer drinkers didn’t know what a Gose (another German wheat-based beer) was and that style is extremely popular now, with many breweries creating at least one Gose beer for continual rotation in their lineup. Although the Dunkelweizen isn’t quite as obscure as a Gose once was, I’d like to see Dunkeweizen come back to even half the popularity that Gose now enjoys.

Time for me to get a little ranty here at the Tap Takeover. Most of my posts have been positive so this is a bit of a heel turn. However, based on some conversations with other hop-heads, I don’t think I’m alone in what I’m about to rant about.

Seasonally appropriate beers. I’ve written quite a bit about summer beers, largely because I began this blog in May. I enjoy all the seasonally appropriate beers – especially Oktoberfest beers (in September and October), as well as the pumpkin beers and Christmas/Winter beers (From September through January, there’s overlap between pumpkins and winter warmers). But what frustrates me is seeing Pumpkin Beers on the shelf in July. Or seeing Summer Beers on shelves in March and April. Hell, my own father had a six pack of Oktoberfest in his fridge this past weekend!

Like I said, I enjoy Pumpkin beers quite a bit. After all, I’ve had close to 50 different Pumpkin beers S.J.U.* But there’s a cognitive dissonance when it comes to sitting in my pool and drinking a pumpkin beer. It just shouldn’t be.

S.J.U.* is my short hand for Since Joining Untappd. I joined in February 2014.

What I’ll call Seasonally Inappropriate Beer is something that’s been going on for years, it seems. Each brewery wants to get their seasonal beers on shelves a little earlier, driving other brewers to push out their seasonal beers earlier. If you look at the release calendars of some brewers, they have July as their Pumpkin release! There are a couple of problems with this, aside from the whole cognitive dissonance issue. It is one thing to do a “Christmas in July” type of thing, a few bars not too far from me did special tappings of Tröeg’s Mad Elf in July. But that is a one-time event.

For starters, this early release creates an excess of one thing drowning out all other varieties. First one brewery puts out a pumpkin beer in July, then in early August another Pumpkin beer will appear. Before Labor Day, a shelf that should still have Summer/warm weather beers*, is half full of pumpkin beers.

*Oh I don’t know it is still warm and people’s pools are open and pumpkin is a fall and post-Labor Day food thing.

Second, by putting out the seasonally inappropriate beer too early, the beers may not last as long on the shelves and saving them until the season syncs up with the beer may allow the beer to taste less fresh. Again, I’ll call out pumpkin beers largely because I think there are too many pumpkin beers now, even though I do enjoy them. Pumpkins aren’t just a fall flavor/food, as far as I and I think many people are concerned. Pumpkin Pie goes just as well on a Christmas dessert table as it does on a Thanksgiving dessert table. As would Pumpkin beer, but with the pumpkin beers being released so early (July!!!), pumpkin fatigue can hit. While I always try to wait until *at least* September to enjoy pumpkin beer, by the time November rolls around, stores and breweries are already pushing Christmas Ales. Oktoberfest beers are a slightly different story, largely because they don’t seem to be quite as prevalent now as pumpkin beers are. I’ll usually pick up several Oktoberfest six packs…when mid September rolls around.

I don’t think this is just one craft beer drinker’s opinions. So, what are we to do? Boycott something we enjoy? Then we’re depriving ourselves. It is a frustrating thing, just like seeing commercials for Summer beers in March was earlier this year. What really set it off for me this year was seeing a 2017 pumpkin beer in my local liquor store a week or two after the Fourth of July.

Right. I know this is a silly thing to be ranting about, because I can (and do) easily reach past the Pumpkin beers to grab other beers I’d rather have that are more seasonally appropriate.

I’ll end this with a confession…as much as I’ve ranted about seeing the pumpkin beers now, writing about these pumpkin beers has me looking forward to trying a few new ones in month and a half and returning to some old favorites. I’m looking at you Southern Tier Warlock, Two Roads Roadsmary’s Baby, Schlafly Pumpkin Ale, and River Horse Hipp O Lantern.