“Cathedral Tree is a delicious, classically crafted full-flavored Pilsner and a beer worth seeking out should you find yourself in the Astoria, OR area.” 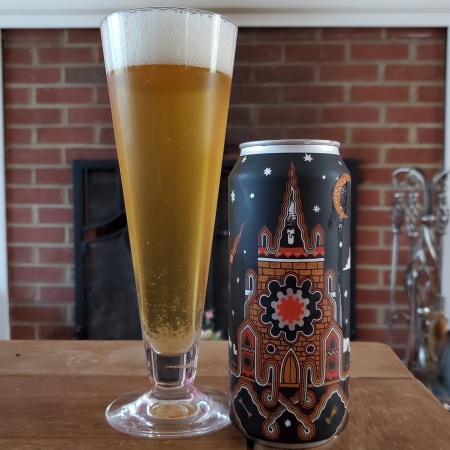 Cathedral Tree is a beer that pays reverence to the timeless lager style – Pilsners. Fermented entirely in 500 Liter oak puncheons, to incorporate Old World methodology and provide a mellow tannic structure that lends a full mouthfeel and support for classic German noble and modern hops. Finishes crisp, clean, and refreshing as any Pilsner should. Look for Cathedral Tree in 16-ounce cans. And just like the actual Cathedral Tree, this one is staying firmly planted at the coast.

For our 20th Wedding Anniversary, my wife bought me a box of special beers, 20 beers specifically. Each beer is meant commemorate a special moment, event, or shared memories from the 20 years of our marriage. Not just any beers, mind you. She bought 20 different styles of beer from breweries from around the country, 18 of the beers through Tavour, which is a beer crating service that allows consumers to get beers from small, independent breweries from around the country. Beers from, say, a small brewery in Oregon a person (like me) from New Jersey would never otherwise be able to procure. Tavour also is a great way to support small and independent business which aren’t exactly local.

My wife also put together 20 index cards with a printed image and a textual hint as to what the beer might be or where the beer was made. This game consists of me picking a card and then she presents a few ounces of the beer in a taster glass, so I can guess what the beer is. The index card clue for this beer hinted at a German store near our house we frequent, so I was hoping for some kind of Lager. I immediately knew it was a Lager of some sort from the aroma, but the small taste also had me feeling pretty good about the beer being a Pilsner. As it so happened, this beer was second I had from the Tavour box and it is one of my favorite styles, a Pilsner.

The beer pours a perfect golden-yellow with a fluffy white head into my Pilsner glass. As it turns out, the glass from which I enjoyed the beer was a wedding gift from my coworkers of 20 years ago, they gave me a box of Pilsner glasses, so another little reminder of 20 great years of marriage.

Getting more of the aroma from the full glass with the fluffy head, it smells like a Pilsner, with some bready elements plus some slightly fruity elements, too.

The first full taste of the beer was extremely pleasing. Cathedral Tree has the classic German Pilsner elements – bready/crackery malt and a pleasant hop finish. Many Pilsners have some kind of hint of fruit element from the hops and while the description above calls out grape as a flavor, I can’t say I was getting any of that. Maybe a hint of nectarine, but more of a pear hint. Not that I was drinking pear juice from a Pilsner glass, but pear is that subtly noticeable fruit that is found in a lot of juice blends to bring other fruit elements together. That’s what the fruity elements here did for my taste buds – brought the wonderful crackery malt together along with the hints of oak from the fermenting barrel.

Cathedral Tree is a superb Pilsner and one I’d happily have again and seek out should I ever have the opportunity to visit Oregon.

Also worth pointing out is the gorgeous art wrapping the entire can of beer from Will Elias. Although Fort George’s description of the beer calls out German styles, the Cathedral-like structure looks like it would fit in really well in Czechoslovakia, the birthplace of Pilsner beer.

From the beer’s description on Rogue’s Web site:

We grow bees. Taste the difference.

Situated just across from 40 acres of Rogue hops, 7,140,289 Rogue Farms bees are carefully kept and fed and the honey is uncapped, extracted, filtered and finally infused into a refreshing Honey Kölsch Ale.

Based in the western craft brew mecca of the Portland, Oregon Area, Rogue is one of the larger and more respected craft brewers in America, . Perhaps their most popular and well known beer is their Dead Guy Maibock, arguably one of the foundational craft beers of the last couple of decades. They brew tasty stouts, well-received IPAs and some peculiar experimental brews like a “Beard Beer” and “Srirachia beer.”

Their Honey Kölsch takes European style and infuses with American farming for something quite tasty. This brew looks to have been released for the first time in 2013 and from what I see on Beer Advocate, it looks like this was originally a 22oz release, but was released in 6 packs for the first time in 2016. This makes sense because it is a great summer time / warm weather beer to keep in your cooler, although it doesn’t explicitly state that in the name.

Kölsch is, like many beers, a German style whose name is derived from where it was originally brewed in Cologne (Köln), Germany. The beer is crisp in profile and often bright yellow in color. The color and flavor profile is typically similar to that of a German Pilsner, but often with a slightly lower hop/IBU profile.

As craft beers grow in popularity, more varied styles are gaining popularity and Kölsch seems to be one of those styles. I’ve had only about ten different Kölsch ales over the past couple of years, this one is probably my favorite. The crispness is such a refreshing hit and the honey perfectly balances out that crisp-profile before the crisp crosses the line to bitter. Those two flavor profiles make Rogue Farms Honey Kölsch a beer you want to crack open while grilling, after mowing the lawn, or sitting by the pool or yard as the warm summer day becomes a pleasant summer night.

Although I didn’t mention this brew in my Summer Beer Draught Diversion, two years now I’ve had a couple of these while sitting by my pool and I’m going to make sure this is in the regular rotation as long as Rogue puts it on shelves in the warm-weather/summer months throughout the long summer days.

The beer pairs well with just about any kind of meat you want to throw on the grill from burgers to hot dogs to chicken. The comforting taste makes it a good pair with pizza or any food, really. A very tasty beer that doesn’t overpower with any of its ingredient components, but simply gives a nice, balanced profile of taste.