Four City Brewing in Orange, NJ has been generating some positive buzz since opening their doors for business about a year ago (2019). Their average beer rating on untappd is about 3.75 / 5, with many beers landing above a 4-bottle cap rating and a few friends rating their beers quite higher than that. Four City Brewing is one of three black-owned breweries in New Jersey (the other two are Montclair Brewing Company and Hackensack Brewing Company), too. 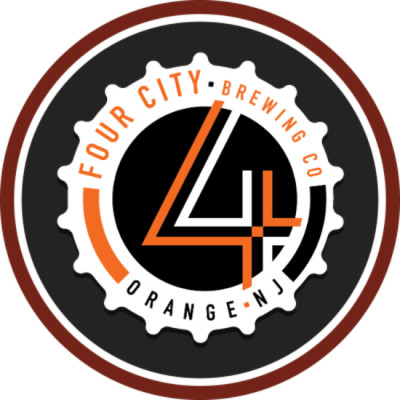 Four City is in a pretty good location, close to the downtown area of Orange and across the street from the Orange NJ Transit train station. Orange also has a history of brewing; Rheingold Beer, once one of the most popular beers in the NY/NJ area, brewed beer in Orange, but shut its doors in 1980. The beautiful building, once a warehouse and coal facility, is now a mixed use space developed by L+M Partners with the brewery just one element in the revitalization of the Downtown Orange. The space is very simply, a beautiful brewery. A very inviting exterior, a welcoming interior, as well as the friendly staff, help to make this brewery look so good. 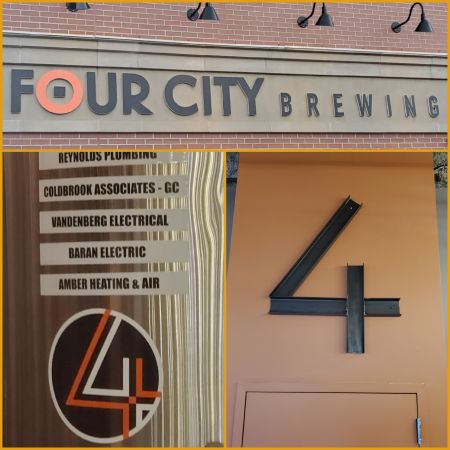 Before the brewery opened, a lot of passion, work, and effort went into its creation. Like the origin story for many breweries, owners Roger Apollon Jr., Jeff Gattens, and Anthony Minervino were homebrewers who unofficially (or really, I suppose officially) called themselves “The Brew Council.” For about fifteen years, Roger sought out different beers wherever he went, before meeting Anthony and Jeff. As the brewery ramped up, they hired a full time head brewer, Joe Vitale. That was all about a year ago. They all settled on Orange as the location because they are all from the area and in addition to Rheingold once calling Orange home, way back in 1901, the Winter Brothers’ Orange Brewery was in the Township. The name, “Four City” honors the four Oranges of NJ (West, East, South, and Orange). As will become evident, many of the beer names are homages/tributes to the local diversity and history of the area. The design of the brewery, the design of the logo, and most of the can labels are very consistent. In other words, Four City has established a very strong brand identity.

The taproom is fairly large at 4,700 square feet and the tanks are visible, but I don’t recall what brewery’s barrel capacity is. What Jeff Gattens told me during our conversation was that Four City has a canning line and they have enough capacity to allow them to brew and can beer for their friends at Hoboken Brewing. The day of my visit, 11 beers were available in cans and 21 beers available on draught. There is some overlap there, for example, their flagship Pale Ale Citrus City was available in both Cans and on draught. In other words, Four City has a great set up to be a production facility that also can house patrons on site. 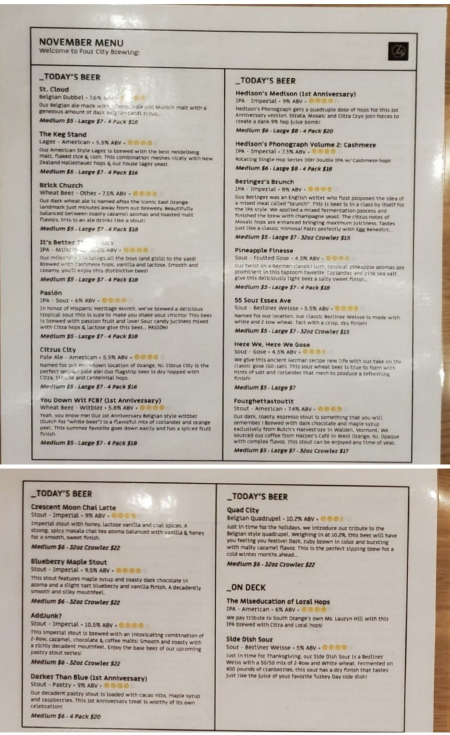 The day was unseasonably warm for November (I was wearing shorts). When we arrived, we were seated at a table inside, with all the tables amply spaced out for social distancing. The door was open and the coolish breeze was blowing through the brewery. The extremely friendly beertender greeted us and took our orders. While Four City wasn’t doing flights, they were pouring “medium” pours, which I think were about 8oz.

I went with the flagship, Citrus City, the Belgian Dubbel, St. Cloud (reviewed Tuesday, 11/17) and Quad City, the Quadrupel. It isn’t often I see both a Dubbel and a Quadrupel (one of my favorite styles) on draught, so I felt very compelled to get Four City’s interpretation of these two styles that tend not to be uber-prevalent. I was very impressed with Citrus City, to the point I regret not bringing home a four pack of the beer especially since it has three of my favorite hops: Citra, Simcoe, and Centennial hops. It was everything I hope to enjoy a Pale Ale…hints of citrus, with hops and malt expertly balanced. The beer was very clean and would be a great beer for the cooler. I reviewed St. Cloud, so that leaves Quad City to discuss, albeit briefly. Wow. Simply, wow. There is so much flavor to this beer, hints of dates and figs from the potent yeast, a very sweet beer whose 10.2% ABV is dangerously masked. This is a fantastic Quadrupel.

As I noted above, many of the beers pay tribute to the history/diversity of the region. Citrus City is a fairly obvious homage to the nickname of the brewery’s home town. A series of IPAs, Hedison’s Phonograph are named in honor of West Orange’s Thomas Edison, inventor of the phonograph. The Miseducation of Loral Hops pays tribute to megastar Lauryn Hill of South Orange, NJ, Sak Pasé (a fruited Berliner Weisse) is a Haitian Creole greeting for “What’s Up?” and there’s a sizeable Haitian contingent in the Oranges; Brewellyn Park is an IPA named for West Orange’s Llewellyn Park; Eagle Rocktoberfest (a Märzen) takes its name from the Eagle Rock landmark; Brick Church is a dark wheat ale takes its name from the eponymous landmark minutes from the brewery, and 55 Sour Essex Ave is a Berliner Weisse named for the brewery’s address, and so on.

Talking about the pandemic is unavoidable at this point, but Four City was in a decent position to pivot. The aforementioned canning line in the facility allowed them to package their beer for the home delivery now being allowed in the State of New Jersey. Also during the pandemic, Four City celebrated their 1st anniversary with four different beers: Hedison’s Medison with three different hops rather than the standard single hop; Darker than Blue, a pastry stout with cacao nibs, maple syrup, and raspberries; You Down Wit FCB, a witbier (the name is an homage to 90s rapgroup Naughty by Nature’s song “O.P.P.” and if you are humming that song as you read this then I suspect we’re about the same age); and It’s Better Than Yours, a Milkshake IPA who takes its name from the lyrics of the song “Milkshake.” 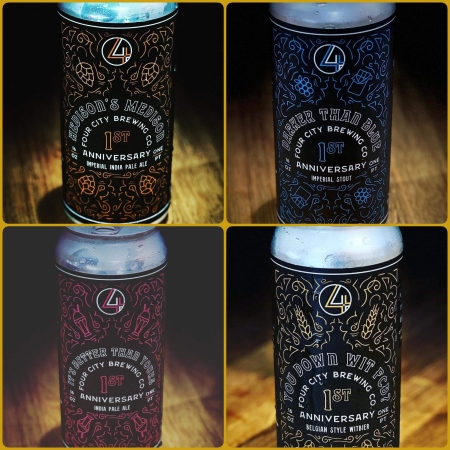 Although Four City is just over a year old, they’ve already garnered some national recognition. Being a Black-owned brewery is one way they’ve stood out, not just in New Jersey, but nationally. There’s been a beer festival in Pittsburgh the last few years called Fresh Fest, which features Black-owned breweries. In 2020, Four City collaborated with Shu Brew of Zelienople, PA on a Dark Ale with Oreos, cacao, vanilla, coffee, and lactose they’ve called Brewers Gonna Work it Out. That sounds like a beer I want yesterday. Some of their beer has become available on Tavour, as well.

Prior to the Pandemic, Four City hosted onsite events, including Halloween parties, a night for a meet and greet with local artists, a Holiday Beerzar, a “Brews and Culture” night of local music, a cornhole tournament, and the requisite yoga nights. These events, along with the owners’ deep roots in the region, deep respect they have for the community, and honor they show with their beer names adds up to one thing in my mind. Just over one year into their existence, Four City Brewing is something of a template, or ideal of what a community Craft Brewery should be.

The goodies I brought home from my visit to Four City

Since Four City was part of a tour of a few breweries fairly close together (a tradition for my birthday over the last few years), there are obviously a handful in the area that could comprise a similar tour. Montclair Brewery is the closest at 4 miles away, and we tried to visit, but they were extremely packed and because of the social distancing rules of the Pandemic, we couldn’t stick around because we had reservations at other places during the day. Also very close is the Gaslight Brewpub, which is where we went after Four City for dinner, they’ve got really good food. Melovino Meadery is about 5 miles away, Ghost Hawk Brewing, Magnify Brewing, and Cricket Hill Brewing (the latter two of I’ve visited) are relatively close at about 11 miles away. 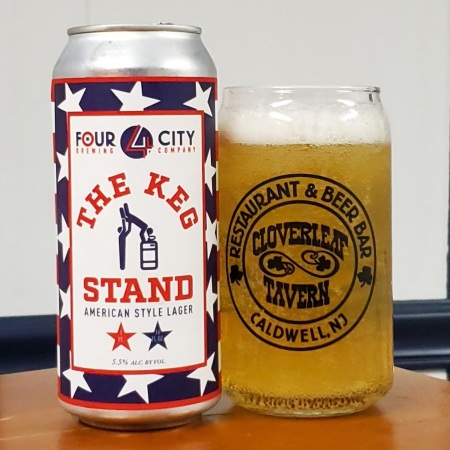 The Kegstand, a delicious American Lager

I’ve written quite a bit about Four City Brewing at this point. One thing should be very clear – I like the brewery a lot. Between supporting local independent businesses, supporting black-owned breweries, and supporting breweries that make super beer, Four City is a must visit for those reasons. Four City Brewing is comfortably near the top of the 50 or so “new to me” breweries I’ve visited over the last few years and I look forward to visiting again.

Some other links of interest and sources of information for this post: