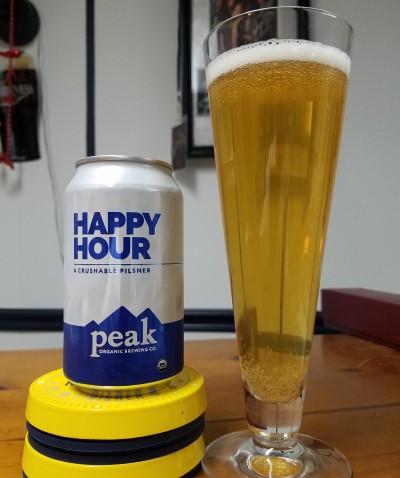 From the Peak Organic’s Landing Page for the beer:

Happy Hour is a masterfully designed pilsner. Built to be crisp, clean and crushable. This beer is easygoing and pairs well with everything, including another beer! With this new pilsner, it’s always Happy Hour.

Over the last year or so, I’ve come to  appreciate the elegance of a well-crafted Pilsner. The style has drawn some bad rap because of mass-produced tasteless light/Lite beers. If you hear from brewers or some folks deeply entrenched in the beer community; however, great Pilsners are held in very high regard.

Peak Organic is based out of Maine and they don’t yet distribute into NJ. I had a couple of their beers (including a fantastic Pilsner) at the Philadelphia Bacon and Beer Festival last year, so when I saw a can of their beer in Wegman’s for a Mixed Six Pack, I knew I had to grab it.

I am glad I did. On the other hand, I’m a little frustrated, because (as I just said) Peak isn’t yet distributed into NJ.

Out of the can, the beer pours a bright golden yellow. If I’m going to be honest, then the aroma doesn’t stand out too much. I mean, it smells like a beer should smell and that just makes me want to drink it.

This is one of the lighter Pilsners I’ve had, but that doesn’t detract from the taste at all. If anything, this beer is full of flavor and wonderfully refreshing. Like the best Pilsners, the malt and hop blend nicely to give the beer a really consistent taste. The first sip is a pop of flavor that, when cold, is extremely refreshing. As the can says, this is a crushable beer, one you can throw back to refresh your thirst with a really straightforward taste with superb, clean finish. This is a beer you’re going to want to finish while cold.

If you want to think of it one way, Happy Hour from Peak Organic is almost an entry-level craft beer. Folks who are usually wary of craft beer because they associate “craft beer” with hopped up IPAs or boozy stouts should give this one a try. Especially given the name, this is a beer that is one you’d bring to a party to share with anybody and everybody. Full of enough taste to please craft beer drinkers, and approachable enough not to deter non-craft drinkers, Peak Organic’s Happy Hour is a winner regardless of how you cut it. As the old adage goes, this beer does exactly what it says on the can!

Peak Organic, as the name implies, uses organic ingredients in the beer and based on Happy Hour and the tastings I had of their other two beers, that freshness really shows. I just hope these fine folks are able to fully distribute into New Jersey.