Maybe not my best pour, but look at that fluffy head

History and provenance are readily apparent, in the taste of the 8. Ever since the 1960s, Rochefort’s own yeast culture has produced those characteristic esters in its divine brews.

Rochefort 8 is considered the ‘lad’ among the three Rochefort beers, with its green-bottle cap hat, which first saw light in 1954. This youngest member of the family straightaway received a warm welcome, after its commissioning by one particular (and rather important) client. One year on, and it was made an official addition to what is now the Rochefort trio, and marketed as a ‘spéciale’. Some still refer to it by this name.

The Rochefort 8 is a beer to be savoured at your leisure. Not too dense, it goes down easily, quietly sparkling. The alcohol in the finish never lets you forget that this is an authentic degustation beer, one that cannot be hurried along. It is sweet and chocolatey, pleasant but certainly never boring. The same can be said of the alcohol content – it makes itself known, but it never overpowers, leaving plenty of room for all the rich subtlety to be found in a glass of the 8.

If beer is said to be liquid bread, then Trappist Rochefort 8 is a great example of that ideal. Trappist beers are relatively rare, there are certain rules and regulations around what is considered a Trappist Brewery, Rochefort is one of only a eleven breweries in the world that can be called a Trappist Ale, and is a classic example of a Trappist Brewery in Belgium. The Abbey in Rochefort has been brewing since 1595 so, like last week’s beer from Weihenstephan, this beer can be considered a European Classic.

So what can one expect from a beer brewed by an Abby that’s been around for over 800 years and brewing beer for a majority of that time? A lot of complexity. The yeast in this one releases a bounty of flavors that will appeal to beer lovers who appreciate low-hopped, dark, bready beers with hints of fruit. This is a beer to enjoy over time and not one to consume quickly.

The beer pours brown from the bottle and, at least with my bottle, a very fluffy tan head. The aroma hits your nose and invites you to linger for a bit to give your taste buds an idea of what to expect. A “Belgian Strong Dark Ale” is almost like a stout, largely from the hue of the beer and the robust nature of the flavor profile, but it isn’t quite a stout either. At least this one is fairly far removed from a stout.

The first hints are of a malty, thick beer that will linger on the palate. I didn’t quite get the plum flavor evocations in the taste profile others claim to taste, but I definitely get the banana hints from the yeast. Or maybe my palate is unaccustomed to plums, especially as a flavor component in a beer. There’s also a spice flavor laced throughout the beer that isn’t quite clove, nor is it too assertive. Rather, it gives the beer a very well-rounded flavor profile. That was all on just the first couple of sips of the beer.

This beer warms up real nice. As it gets closer to room temperature, the flavors come out more prominently. Maybe the plum hints come through as the beer warms, because I get *something* that is a bit of a fruity taste, but not the banana evocation I tasted initially. Maybe something earthier like figs, I don’t know, but I like it quite a bit.

At 9.4%, this one does have a noticeable bite of alcohol. This beer has a quality similar to barrel aging that gives stouts an extra kick, but it is welcome in this beer and not too overpowering. Of course I took my time drinking this beer over the course of maybe 45 minutes to an hour. There’s not a lot of filtration going on here, so expect some yeast particulates to linger at the bottom of the glass, even thicker from this bottle than I’d come to expect from a Bavarian Hefeweizen. Some people think those particulates are the best part of the beer. I was a little wary of finishing them off, but what allowed the flavor of the beer to evolve even in the last few sips was swirling the beer with those particulates, which continued to release flavor bursts.

This is the second Belgian style brew I’ve reviewed here at The Tap Takeover and the first from an actual Belgian brewery. I’m coming to thoroughly enjoy the beer produced by the Belgian brewing methodologies and Belgian ingredients, particularly the yeast which gives the beer the robust flavor, a great deal. This is a beer worth trying once. I know I’ll be trying more of the Trappist Ales in the future. 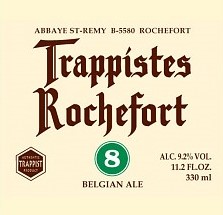